Skip to content
Home › The Blessings of Medicine? Patient Characteristics and Health Outcomes in a Ugandan Mission Hospital, 1908-1970

The Blessings of Medicine? Patient Characteristics and Health Outcomes in a Ugandan Mission Hospital, 1908-1970

From the 1920s, and especially from the 1950s, recorded mortality levels across tropical Africa fell substantially, contributing to exceptionally high rates of population growth (Frankema & Jerven 2014). While this broad trend is generally accepted, there remains considerable disagreement about the timing of mortality change (Walters 2008), the relevant significance of curative and preventive medical interventions, and the related question of whether increased longevity was accompanied by substantial declines in morbidity (Cordell & Gregory 1987).

Although the decline in mortality rates can be viewed as a core achievement of the modern African state, the main source of healthcare for most Africans, until the late-colonial era, was Christian missionary medicine (Doyle 2013). This paper (Doyle, Meier zu Selhausen & Weisdorf 2019) sheds new light on the impact and experience of western biomedicine in colonial Africa. We use patient registers from one of Uganda’s earliest mission hospital to explore long-term trends in African biomedicine and determine whether and how Christian conversion and mission education affected African health behavior.

We use a unique dataset of 16,525 inpatients derived from the medical registers of Toro Hospital from 1908 to 1970. Toro was Uganda’s first rural mission hospital, founded by Dr. Ashton Bond of the CMS in 1903. These registers contain systematic records of African patients’ diagnosed disease(s), treatment result at discharge, duration of hospital stay, as well as patients’ personal details, including their names, age, sex, religion, and residence. We coded each disease into the International Statistical Classification of Diseases of the World Health Organization (WHO).

Who came to the clinic?

Figure 1 documents Toro Hospital’s substantial geographic reach. In 1908-49, patients came from an average distance of 20 km. While the majority (62%) came from a radius of 10 km from the hospital, almost one in four came from more than a day’s walk (32 km) away. The patient body became slightly more localized during the 1930s due to the expansion of other government hospitals and dispensaries in the region. 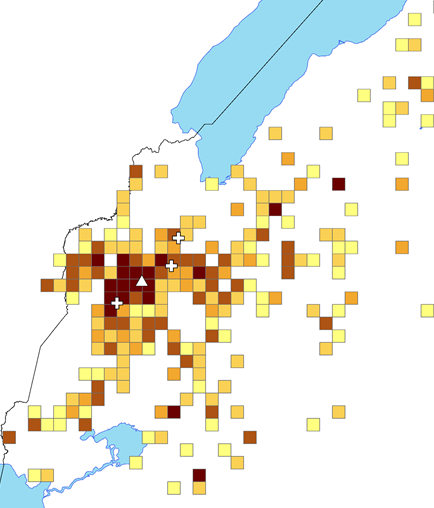 Figure 2 shows long-term average length of patients’ stays, an indicator of medical efficiency, and tells a remarkable story of sustained rapid reduction among Toro inpatients. Between 1908 and 1970, Toro patients’ length of stay declined almost lineally, from close to one month (28 days) in the early 1900s to just two weeks (15 days) at the end of the 1930s and to less than one week (6 days) in the 1960s. We document equal patterns in Ugandan government hospitals. This steady rise in efficiency was driven by shifts in both therapeutic capacity and norms of best practice. It seems likely that the pronounced dips in the duration of hospitalization in the 1930s and 1950s were related to the introduction of sulfonamides and penicillin, respectively, which meant that bacterial infections such as tropical ulcer and syphilis no longer required weeks of intensive nursing. 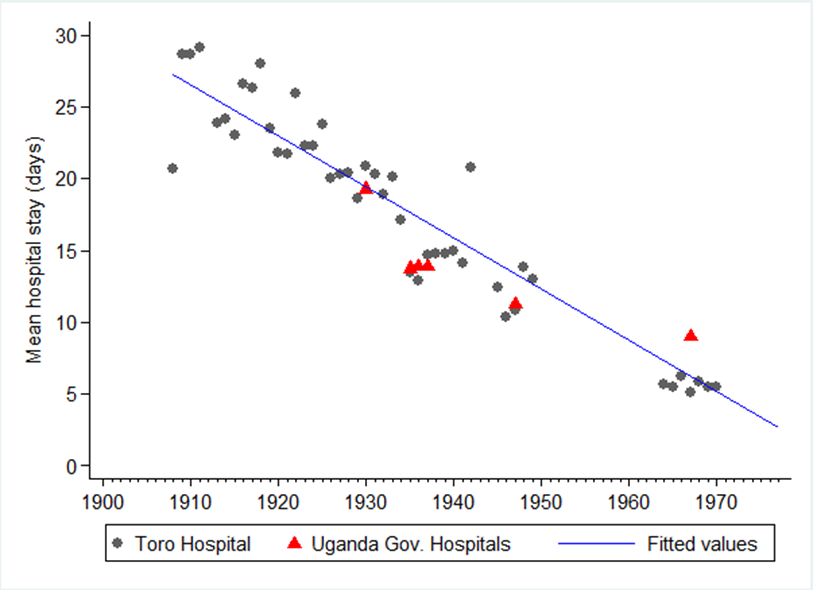 Mission schools and churches sought not only to convert Africans to new religious beliefs, but also to transform adherents’ hygiene behavior, family life and health habits. But to what extent did the moral and formal educational aspects of Christian conversion affect African health behavior? Recent scholarship on the long-term impact of historical missionary activities on contemporary health suggests that early European missionary investment in colonial Africa and India has had a significant legacy (Calvi & Mantovanelli 2018; Cagé & Rueda 2019). Our data sheds light on the potential influence of Christian conversion on treatment outcomes and behavior-related diseases, such as sexually-transmitted infections, and hygiene-related diseases (skin infections, gastroenteritis and worms).

First, our multivariate regression shows Christian conversion did impact significantly on patients’ experience in hospital. Protestants were statistically more likely to be cured and less likely to die than followers of all other religions. They also stayed in hospital for shorter periods (2 days) than patients of traditional religion. 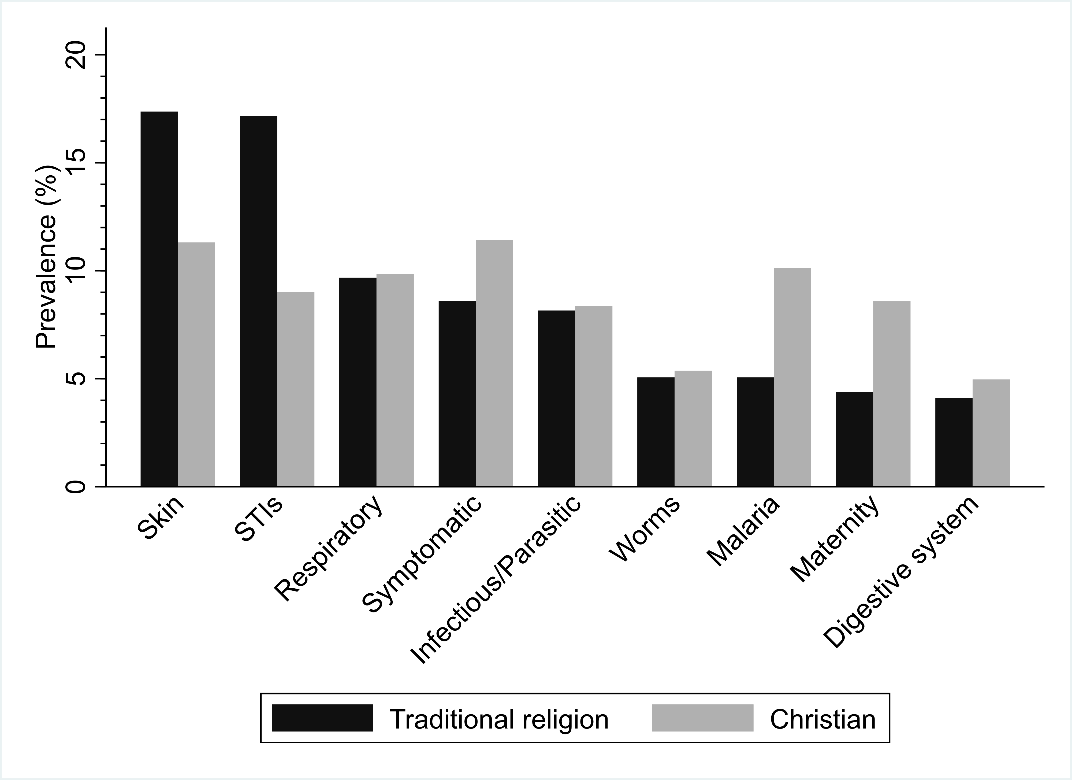 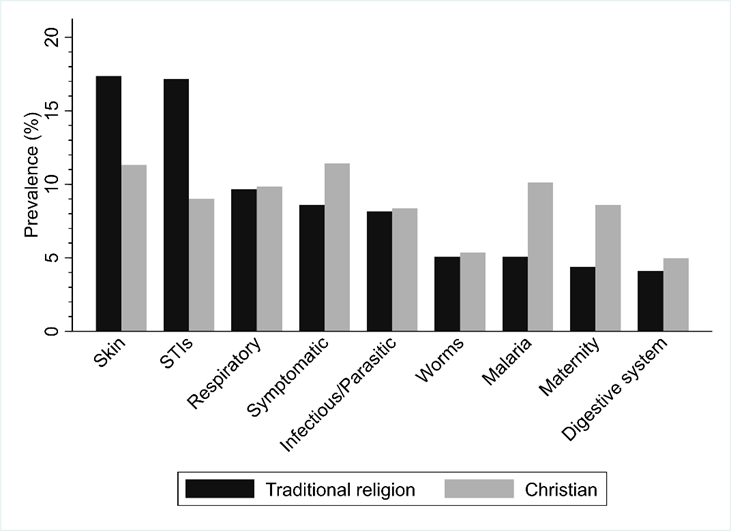 Second, Figure 3 shows disease prevalence by religion, which we confirm in multivariate regressions in the article. We observe no religion-specific effects concerning hygiene-related infections (worms and gastroenteritis). This challenges the effectiveness of missions’ hygiene propaganda or suggests that secular public health information was broadly effective throughout the population regardless of Christian conversion and access to formal education. Christians were more likely to be admitted with malaria. In the absence of bed nets, Christians were potentially more aware of the symptoms of severe malaria and trusted the effectiveness of biomedical treatment. Christian women were also more likely to give birth and seek hospital attention in the event of maternity-related issues. However, Christian conversion was associated with lower incidence of skin diseases and sexually-transmitted infections (STIs).

Taken at face value this result seems to reinforce missionary claims about the transformative moral impact of conversion to Christianity. However, Figure 4 cautions that the tendency to diagnose STIs, and to diagnose deferentially between Christian converts and followers of traditional religions, varied sharply by individual clinician, as indicated by the structural breaks in the years of arrival of a new European missionary doctor. Although, followers of traditional religion were always more likely to be diagnosed with an STI, the structural breaks suggest that missionary doctors’ diagnoses were influenced by assumptions around religious groups’ sexual behavior. 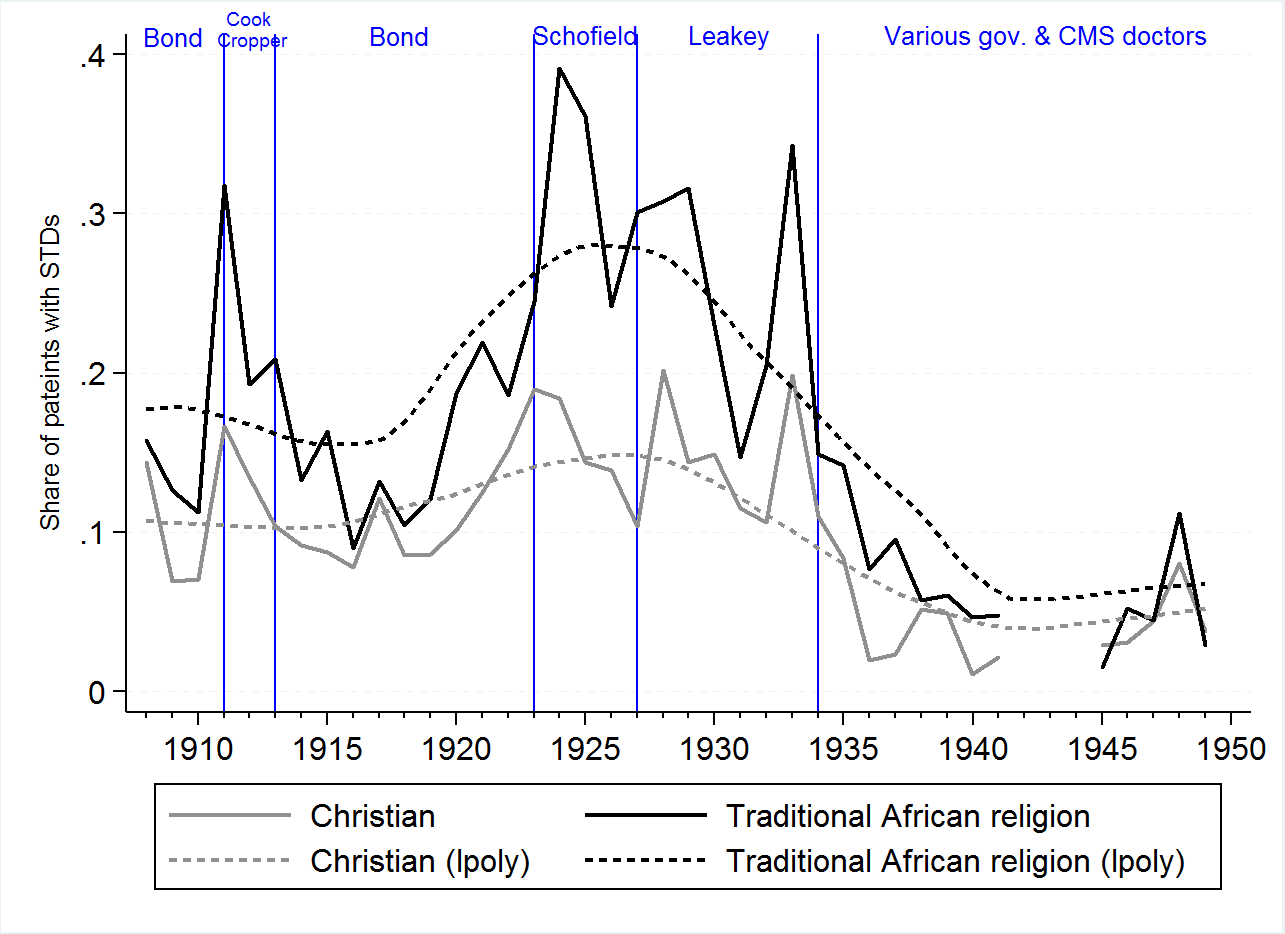 Cagé, Julia and Valeria Rueda (2019). ‘Sex and the Mission: The Conflicting Effects of Early Christian Investments on the HIV Epidemic in sub-Saharan Africa’. CEPR Discussion Paper No. 12192.

Felix Meier zu Selhausen is a postdoctoral researcher at the Rural and Environmental History Group at Wageningen University (Netherlands). His research lies at the intersection of economic history, development economics and demography. In particular, his research focuses on the relationship between religion and socioeconomic development in Africa and gender relations…  Read more

Jacob Weisdorf is Professor of Economics at the University of Southern Denmark and a research fellow at the CEPR in London. His research interests concern the wider forces that led to the wealth of nations.  Read more