Skip to content
Home › Factor Endowments on the ‘Frontier’: Algerian Settler Agriculture at the Beginning of the 1900

Factor Endowments on the ‘Frontier’: Algerian Settler Agriculture at the Beginning of the 1900

This article examines rural settlement in colonial French Algeria at the beginning of the 1900s. By taking into account the timing of settlement for almost 100 municipalities in the département of Constantine, it shows how colonial land policy and settler farming changed as fertile land grew scarcer on the settlement ‘frontier’. The results highlight the importance of including intra-country heterogeneities concerning the local conditions of the colonized regions in the assessment of settlement processes.

Colonial settlement as a ‘process’

It is often claimed that the local conditions, such as the amounts of land and indigenous labour or the type of soil encountered by settlers in modern settler economies, determined modes of production, land redistribution policies, and labour regimes that had persistent long-run effects (Mosley 1983, Lloyd & Metzer 2013, Lützelschwab 2013). Indeed, variables measuring the local conditions in a colonized country at a fixed point in time are frequently included in regression frameworks to explain the outcome and further development of different colonies (e.g. Acemoglu et al. 2001, Easterly & Levine 2016). However, despite the use of these variables within the scholarly literature, little is known about the way in which they changed during the process of settlement. This is because most studies focus on long-term effects and tend to exclude relevant intra-country heterogeneities that are important in the assessment of the impact of colonization on economic development (Frankema et al. 2016).

In a recent article (Maravall 2019), I show how colonial land policy and settler modes of production adapted to the changing local conditions in terms of land and indigenous labor as settlement gained ground within the colony. I examine rural settlement for almost 100 municipalities in French colonial Algeria at the start of the 1900s and focus on cereal cultivation which was the crop that allowed the arable frontier to expand. As fertile land grew scarcer on the settlement ‘frontier’ (Willebald & Juambeltz 2018), the ability of French settlers to incorporate new land in the production process and participate in the export market was increasingly dependent on the capacity to make use of modern agricultural techniques that required larger fields and intensive labor. This made the outcome of rural settlement conditional on the capacity of colonial institutions and settler farmers to adapt to the varying requirements of cultivation.

Providing a broader temporal framework to the data

I use annual agricultural statistics reported by the French administration at the municipal level in Constantine for the years 1904/05 and 1913/14. Both years provide a great variety of information on agricultural production (e.g. agricultural instruments, ownership size, and indigenous labor) at a municipal level, which allows me to control for regional disparities. Constantine, which extends only 300 km inland from the Mediterranean, accounts for almost half of the total French-occupied territory and includes strong regional differences. Although the dataset provides a snapshot of the rural economy at only two points in time (1904/05 and 1913/14), I was able to give a broader temporal framework by identifying the average timing of rural settlement per municipality after the 1840s. To do this, I matched the agricultural statistics to their corresponding ‘settlement centres’, which were territorial units officially created on a certain date by the colonial administration for rural settlers to live and cultivate. These centres were geolocalized by using historical colonial maps, and I reconstructed the official year of creation from various sources. The data were then analysed in a cross-section and panel regression framework.

Figure 1: The département of Constantine at the beginning of the 1900s 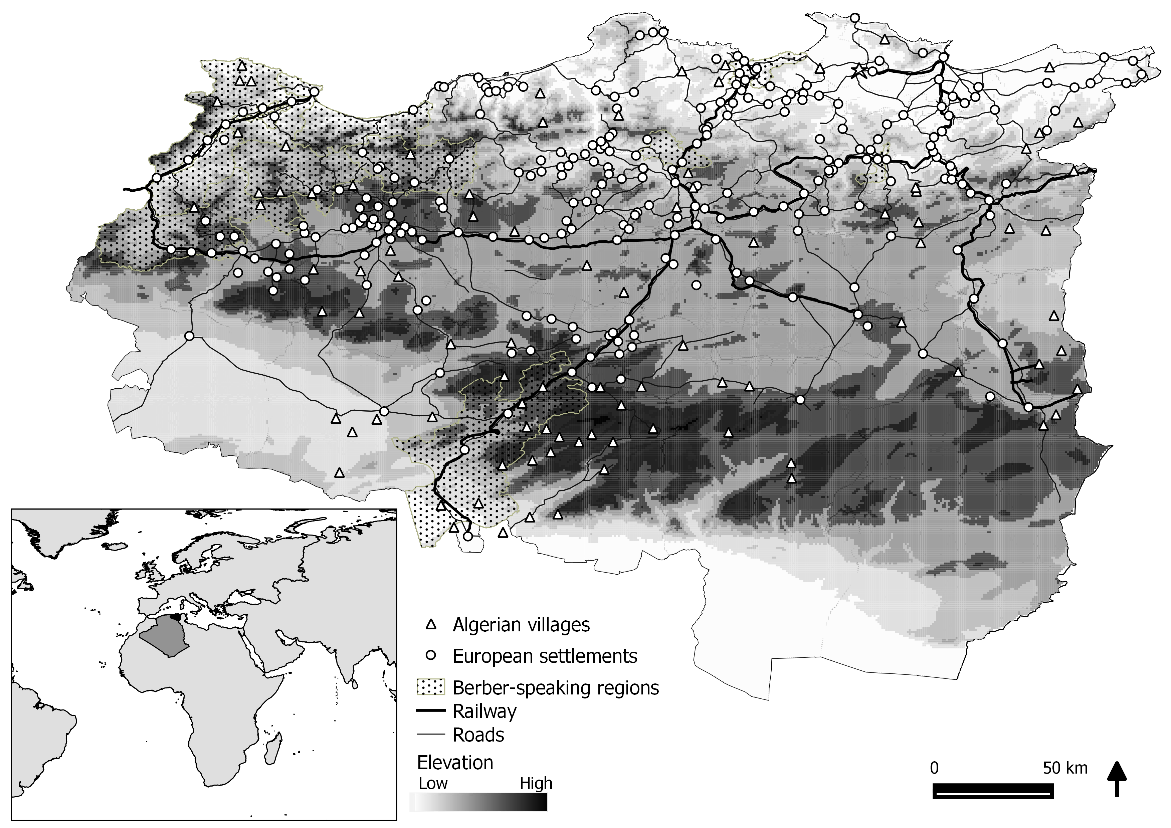 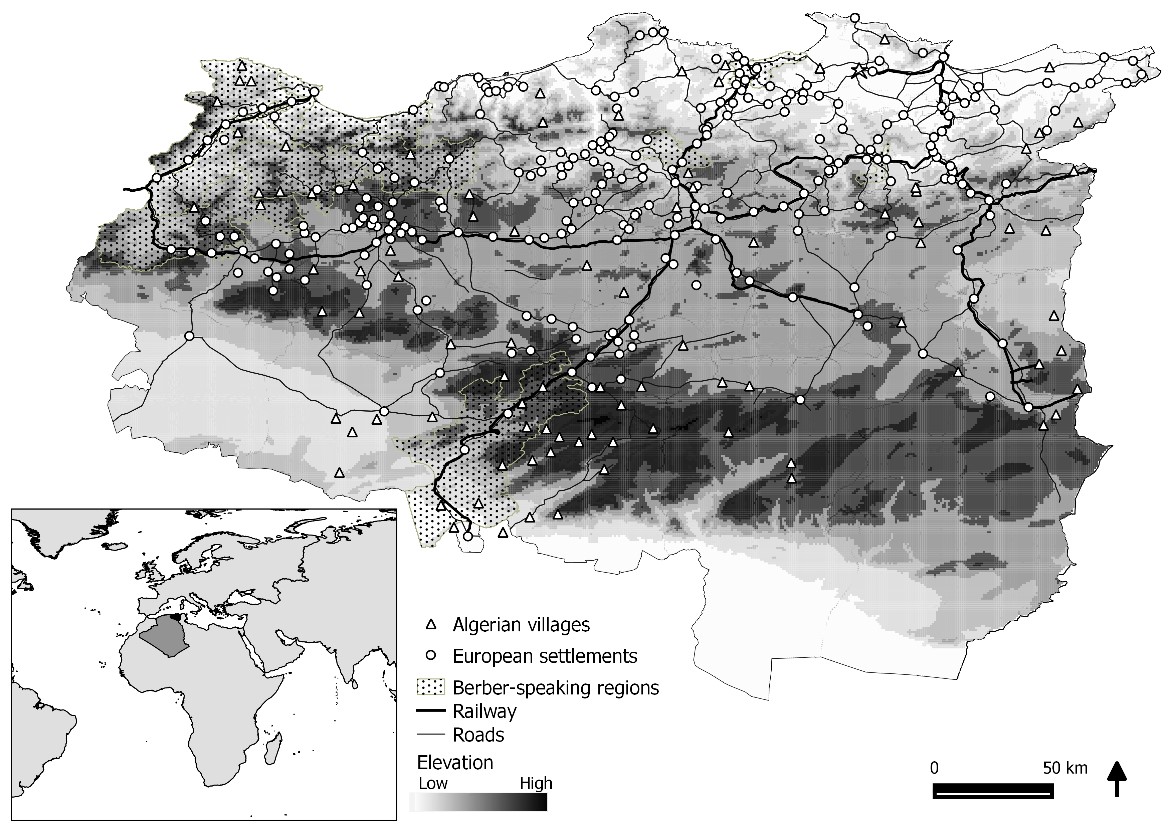 The results illustrate how the limited amount of arable land on the Algerian frontier had a direct impact on colonial land policy and forced colonial policymakers to relax restrictions on the amount of land owned by settlers. In other words, despite the colonizer’s aim of establishing smallholder farmers and regulating ownership size – for instance, as Sessions (2015, p. 250) states, in July 1838 the authorities regarded the concessions less than or equal to 12 hectares as the most appropriate – the data (see Table 1) indicate that the later settlements were endowed progressively with a bigger share of large properties. I argue that this change in policy occurred because expanding cultivation into less fertile regions and consolidating settlement required agricultural intensification (changes in the frequency of crop rotation and more intensive ploughing) that needed larger fields and were therefore incompatible with the French colonial ideal of establishing a small-scale, family farm type of settler economy.

Table 1: A t-test on mean differences between the share of properties by ownership size (small and large) based on the average year of creation of a settlement centre

My results also indicate that French settler farmers were able to adopt more intensive techniques mainly by relying on the abundant indigenous labor force, which was a distinguishing feature of Algeria’s settler economy. The man-to-cultivable land ratio, which increased after the 1870s due to continuous indigenous population growth and colonial land expropriation measures, eased settler cultivation, particularly on the frontier.

In conclusion, by studying the case of Constantine at the beginning of the 1900s, I illustrate how, as rural settlement gained ground within a colony, local endowments and cultivation requirements shaped colonial institutions and settler modes of production. This is because the frontier of settlement, which was characterized by a higher aridity, required modern agricultural techniques that were dependent upon the use of larger fields and intensive labor. The results reveal how settler farmers heavily relied upon indigenous labor to expand cultivation on the frontier and how the colonial land policy decreased restrictions on ownership size to facilitate settlement on the frontier. That is, including the notion of ‘land frontier expansion’ into the understanding of settler economies illustrates the endogeneity of the settlement process. My results are in line with Frankema et al. (2016, p. 239) who argue that settlement processes must not be regarded as an ‘event’ at a given point in time, but rather as endogenous processes that depended on the local conditions and involved significant changes during the colonial years.

Maravall, L. (2019). Factor endowments on the ‘frontier’: Algerian settler agriculture at the beginning of the 1900s. Economic History Review.

Mosley, P. (1983). The settler economies: studies in the economic history of Kenya and Southern Rhodesia 1900-1963. University of Cambridge.

Laura Maravall is an assistant professor at the Universidad Pontificia Comillas in Madrid. She holds a PhD in Economic History from the Universidad Carlos III de Madrid. Her research interests include the study of colonial settlement, agricultural economics, and long-term trends in the biological measures of living standards.  Read more