Skip to content
Home › French and British Colonial Legacies in Education: Evidence from the Partition of Cameroon

French and British Colonial Legacies in Education: Evidence from the Partition of Cameroon

This paper uses the partition of German Cameroon between the British and the French after World War I to study colonial legacies in education. A British advantage emerged in the 1930s, disappeared in the 1950s as the French started investing in education, but re-emerged more recently, likely because of the French legacy of high repetition rates and their detrimental effect on dropout.

Why do colonial legacies matter today?

Economists are increasingly convinced that history matters for economic development. Particularly widespread is the idea that former British colonies are today more prosperous, notably as a result of comparatively better education policies. In their African colonies, the British largely left education to Christian missionaries whose goal was to convert as many people as possible. To do so, they taught in local languages and employed many African teachers. The French, in contrast, relied on public schools where mostly French teachers, teaching in French only, targeted a small segment of the population (Cogneau & Moradi 2014). At independence, average years of education were higher in former British colonies (Benavot & Riddle 1988), and the difference persisted. Some claim that this accounts for differences in economic growth between former French and British colonies (Grier 1999).

But why would colonial legacies matter, once the colonizer is gone? Maybe because colonial education shapes national political institutions, which in turn affect economic development and the provision of education. Maybe because parents who went to school during the colonial period then demanded more education for their children born after independence. Maybe because of some persistence in pedagogical culture and practices (Woodberry 2004). One of these pedagogical practices is grade repetition, when students are retained in a grade if their teacher thinks they do not have the skills to move to the next grade. The practice of grade repetition is more prevalent in France than in other OECD countries, and more prevalent in Francophone than Anglophone Africa (Ndaruhutse et al. 2008).

Or maybe there is simply no causal link between colonizer identity and contemporary education. Maybe when we compare former French and British colonies, we compare regions of Africa that were already very different and that remained different. After all, the British were the dominant power at the time of the scramble for Africa, and it is likely they were able to colonize the richest areas of the continent.

In a recent paper (Dupraz 2019), I tackle this question by studying the “natural experiment” created by the peculiar history of Cameroon. After World War I, German Kamerun was divided between the British and the French (see Figure 1). The border between the two parts was designed hastily and with no concern for local conditions, which means that, close to the border, everything is as if villages were randomly allocated to be colonized by the British or by the French. This is also what happened in German Togo, a case studied by Cogneau & Moradi (2014). But, contrary to Togo, after independence in 1960, Anglophone and Francophone Cameroon were (partly) reunited (see Figure 1). Cameroon is a unitary state today, with a Francophone majority, but it has a separate education subsystem in its Anglophone part. Local protests to defend the Anglophone specificity began in 2016 and have since turned into a violent conflict.

Figure 1: The evolution of Cameroon’s boundaries

In order to understand how colonization by different countries affected education in Cameroon from partition to today, I use Cameroonian population censuses to estimate the difference in educational attainment at the border between French ad British Cameroon for all cohorts of the 20th century. Figure 2 shows the discontinuity in education (the difference at the border between the British and the French part) for 8 cohorts of men in the 1976 population census. As expected, education started diverging after partition. Men born in the 1920s, who were of school age in the 1930s, had one additional year of schooling if they were born on the British side of the border. But it does not seem, at least at first, that this left a very persistent legacy: for cohorts who were of school age after World War II, the difference in years of schooling at the border is zero. This is a period when the French, increased government expenditure in their colonies in the hope of preserving imperial dominance (Cogneau, Dupraz & Mesplé-Somps 2018), started investing in education in Cameroon, by both building more public schools and subsidizing more mission schools.

Figure 2: Discontinuities in male years of schooling in the 1976 census 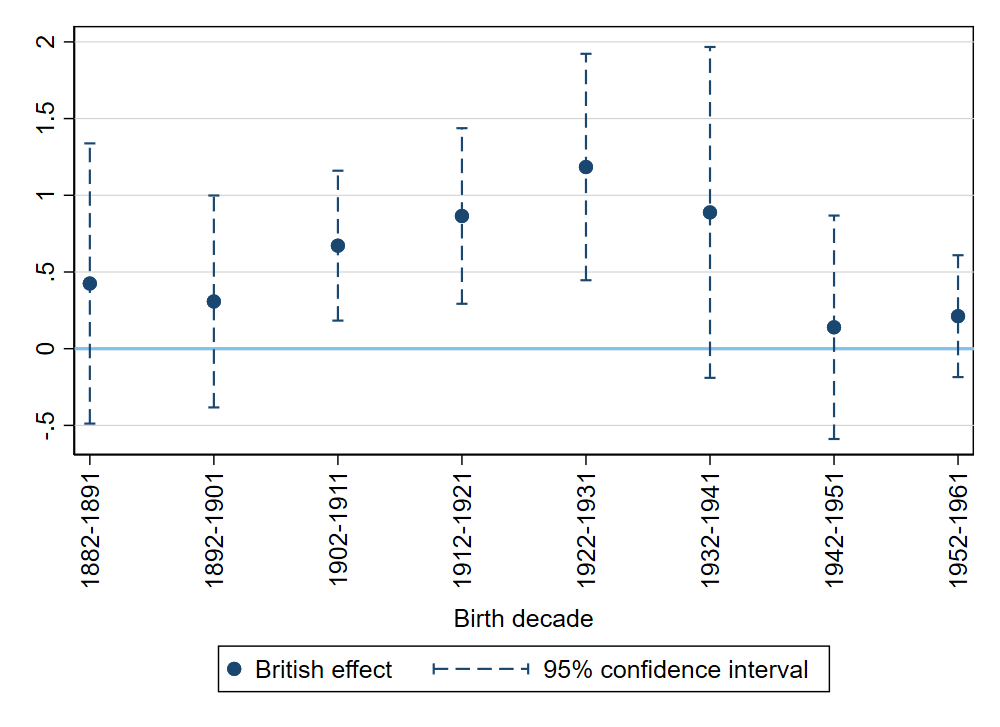 Note: Positive discontinuities favor the British side. Discontinuities are estimated on the southern section of the border between French and British Cameroon.

Does this mean that colonial history left no trace whatsoever on Cameroon’s education? Not really. Using the population census of 2005, I find that Cameroonians born in the 1980s are more likely to finish high school and go to university if they were born in former British Cameroon. In other words, the Anglophone advantage in education re-emerged more recently, but why? I argue that this is because of differences in pedagogical culture. In Cameroon’s Francophone school system, grade repetition rates are 20 percentage points higher than in the Anglophone school system, while students’ reading and writing skills are not different. Because students who repeat a grade tend to get discouraged and drop out of the education system early (Manacorda 2012), this could explain why colonial history still matters for education outcomes in Cameroon.

The current violence in Cameroon’s English-speaking regions might of course, once again, modify colonial legacies in education.

Cogneau, Denis and Alexander Moradi (2014). “Borders that Divide: Education and Religion in Ghana and Togo since Colonial Times.” Journal of Economic History 74(3): 694-728.

Dupraz, Yannick (2019). “French and British Colonial Legacies in Education: Evidence from the Partition of Cameroon.” Journal of Economic History 79(3):  628-668.

Yannick Dupraz is Assistant Professor at University College Dublin and at the Beijing-Dublin International College. His research interests are economic history and development economics. His research focuses on understanding the long-run processes of economic development, cultural and political change. He is more specifically interested in education policies and state building…  Read more