Botswana is one of the most unequal countries in the world, a situation that is often linked to the diamond-led growth during the independence era. Conversely, this article argues that the roots of contemporary income inequality are actually to be found in the colonial-era development of Botswana’s cattle exports.

In recent years, there has been a revived interest in the study of historical inequality (Milanovic 2016, Piketty 2014). This paper contributes to the literature with a study of long-term trends in income inequality in Botswana. Due to exploitation of diamond reserves and wise management of diamond revenues, the country has experienced exceptional economic growth since independence in 1966. The gains have, however, been unequally distributed, with a Gini index peaking at 0.63 in 1993. To explain contemporary Botswana’s high levels of income inequality, we go back to the colonial era and study their historical roots (Bolt & Hillbom 2016).

To capture colonial income inequality, we create social tables, a method that works well when analysing economies for which information about employment and incomes is scarce. The method entails defining all-important social classes within society and determining the average wages earned by each social class. We define eight social classes for colonial Botswana, capturing both wage employment and the traditional rural economy. Subsequently, we calculate the share of population per class and their respective incomes using both colonial and anthropological records. By constructing a social table for each census year from 1921 onwards up to 1974, we trace income inequality trends in Botswana throughout the colonial period into the independence era. In Figure 1, we combine our colonial Ginis with post-colonial official figures to create a curve covering 90 years (1921-2010), the longest inequality curve available for any African country. It shows that income inequality was modest during the early years of colonial rule but started to rapidly increase from the mid-1930s up to the mid-1970s, i.e. prior to the diamond economy. 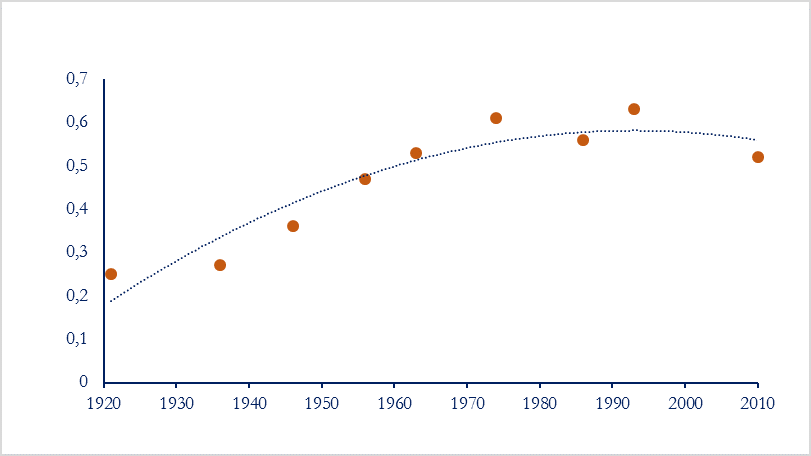 We argue in the paper that the establishment of a cattle export sector in colonial Botswana during the 1930s played a decisive role in the upward inequality trend that we find throughout the colonial period. It created, for the first time, opportunities for cattle owners to turn their wealth into monetary incomes.

While the opportunity to sell cattle at a large scale was new, cattle already played a central role in Tswana society where the agricultural system was based on a combination of crop farming and cattle rearing, and wealth was tied to the ownership of cattle. To capture incomes derived from cattle ownership, we estimate the average size of herds, dividing them into three cattle holding groups by scale: large, medium, and small. Using total cattle exports, we derive income generated by selling cattle for each group of cattle holders. Prior to the establishment of the cattle export sector, cash income derived from cattle ownership was limited, as there were both limited reasons to sell animals (other than to cover expenses like taxes or school fees) and limited options to exchange animals for cash since no formal cattle market was established. This changed drastically when the colonial authorities decided to establish a cattle export sector in the 1930s. Figure 2 shows that cattle exports rose rapidly during the colonial era. By the time of independence in 1966, live cattle and beef represented 85% of total export earnings.

The opportunities to sell animals for monetary incomes were, however, not within reach of all cattle owners. Only if herd sizes were large enough to be robust against drought and diseases could the owner safely sell cows for cash. During the period of our study, this was only the case for the large-scale cattle owners, which made up a small fraction of the population. This small elite could then continue to reinvest earnings into their herds, thereby compounding the initial effect of the commercialization of the cattle sector on the distribution of income.

The second group in society that saw its income increase substantially during the second half of the colonial period was government employees. Their welfare ratio (the number of family consumption baskets that can be bought with existing incomes) increased from 2.8 in 1946 to 10.6 in 1964, and their group size more than doubled, albeit it remained smaller than 1% of the population throughout the colonial period. The long-term implication was that it became increasingly profitable to be employed in the public sector, while surplus controlled by laborers and traders within the private sector remained low and stable.

In conclusion, we find that income inequality rose sharply after the establishment of the colonial cattle export sector in the 1930s and then leveled off during the era of the diamond-led economy after the mid-1970s. The two groups primarily driving this trend were large-scale cattle holders and government employees.

Milanovic, B. (2016), Global inequality. A new approach for the age of globalization, Cambridge: Harvard University Press.