In this study we investigate the impact of weather shocks on social distress in British colonial Africa (1920-39). We find that weather extremes resulted in higher levels of distress and that agricultural commercialization partially mitigated this effect.

In recent years, a proliferation of studies has emerged that aim to quantify and assess the effects of weather extremes on various social and economic outcomes, including conflict, crime, hunger, and mortality (Dell et al. 2014; Hsiang et al. 2013; Papaioannou 2016). Sub-Saharan Africa, in particular, has proven vulnerable, which is not surprising considering that a large share of its population depends on rain-fed subsistence agriculture. Societal outcomes are not uniformly determined by weather conditions, as the effects are mediated by cultural, institutional, and commercial factors. The key question is then: which factors mitigate the adverse impacts of these shocks, and how can such factors be propagated through targeted policy interventions?

Our investigation is set in British colonial Africa during the interwar era (1920-39). The extensive bureaucratic legacy of the British Empire has enabled us to construct a consistent district-level dataset spanning approximately one-fifth of Africa’s landmass and one-third of its population. The data for our analysis have been compiled from annual Colonial Blue Books and Administration Reports, including 200 administrative units in ten countries throughout former British Africa. We use both qualitative and quantitative district-level evidence from these colonial reports to examine the link between weather shocks and social distress, and the mediating role of export crop agriculture.

Did weather shocks cause distress?

The first aim of our study is to examine the effect of years of drought and excessive rainfall on agriculture and social distress. We use colonial administrative reports to explore potential mechanisms. Even though the reports exhibit the biases of colonial officials, they are rich in relevant content. Colonial administrators frequently linked both drought and excessive rainfall to depressed agricultural income and resultant distress and unrest, as illustrated in the following examples.

In Northern Nigeria in 1927, “the rainfall, which was considerably below the average, caused a partial failure of the guinea corn and yam crops in certain districts of the province.” (Nigeria, Provincial Report 1927). The annual imprisonment rates exhibited an increase of about 61 per cent, leading the Commissioner to state that “there is no doubt that the reason for the increase of crime is mainly economic” (Nigeria, Police Report 1927).

In Rufiji District (Tanganyika) in 1930, “for a considerable period 15,000 natives were homeless owing to the floods and many lost their houses, stock and crop.” The local police commissioner noted that “there was an increase of cattle theft, perhaps due to the shortage of food” and that “cases of theft predominated” mainly owing to the food shortage. The number of thefts rose to 1,028 compared to 600 the previous year – an increase of 71 percent (Tanganyika, Native Affairs 1930).

We analyse the link between rainfall and social distress econometrically, using fluctuations in annual imprisonment to proxy for varying levels of distress. We reason as follows: if weather extremes result in loss of income from agriculture, and if people have no savings to compensate for this loss, we may expect a rise in behaviors and activities that result in imprisonment, such as property theft; tax, debt, and fine default; and civil unrest. The effect of rainfall variation on imprisonment is illustrated in Figure 1. Each dot represents the deviation from the long-term mean of rainfall and imprisonment in a specific district and year (expressed in standardized z-scores). Figure 1 clearly shows that imprisonment was higher in years of extreme weather conditions. Econometric testing, using a panel data fixed effects model, substantiates this effect.

Did cash crops alleviate the impact of weather shocks?

The second aim of our study is to investigate whether the commercialization of smallholder agriculture aggravated or mitigated the impact of weather shocks in our British African sample. The existing literature on this issue is divided. On the one hand, increased openness to external markets has been associated with higher farming incomes and access to food. Agricultural commercialization has also been associated with better access to farming inputs and technologies and government investments in infrastructure, famine prevention, and extension services (Fafchamps 1992; Braun & Kennedy 1994). On the other hand, market access is not a uniform blessing to vulnerable rural communities. External markets can be volatile, and when production for export involves a trade-off with subsistence, it may induce hunger and malnutrition. Cash crops may also facilitate social stratification and extraction (Bates 1981; Scott 1976).

To identify the varying degree to which districts in our sample focused on export-oriented crops relative to subsistence production, we construct our own estimates of export crop production per district (based on export and production statistics), reported in Figure 2. We replicate our analysis using FAO crop suitability indicators.

Our econometric analysis shows that incarceration rates in export-oriented districts were significantly less sensitive to weather shocks compared to subsistence-focused districts. Various econometric robustness tests increase our confidence that the cultivation of export crops drove this heterogeneous result. Although we argue that export crops may have both positive and negative effects on resilience to weather shocks, we conclude that their overall effect was to reduce distress. 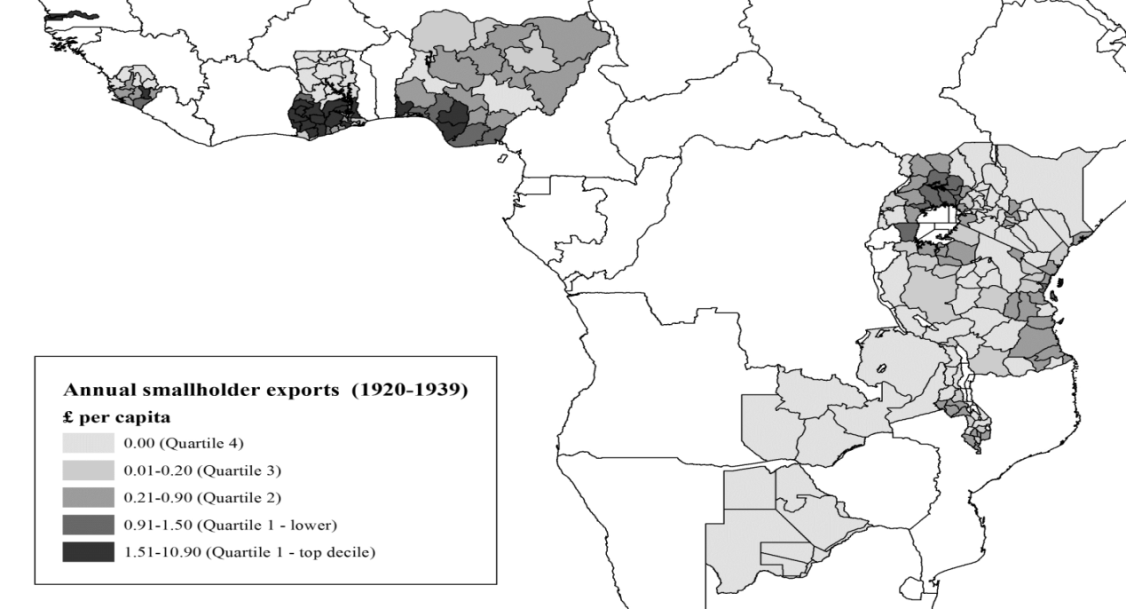 In summary, we find that weather extremes caused social distress and that agricultural commercialization mitigated this effect. An acceleration of global climate change is projected to generate more severe and unpredictable weather events in years to come. Based on our findings for colonial British Africa, we do not presume to suggest that agricultural commercialization is somehow a “silver bullet”. It is important to consider the extractive colonial context of our study. Still, we do show that even in this colonial setting, commercialization had a mitigating effect on distress. Our study therefore indicates that providing African smallholders with access to external markets may be an important way to reduce vulnerability to weather extremes.

Kostadis J. Papaioannou  is currently working as a Postdoc on the research project “Spatial Inequalities in African Political Economy” at the London School of Economics & Political Science (LSE). He obtained his PhD at the Rural and Environmental History Group, Wageningen University. His research interests revolve around the relationship between climatic…  Read more