Between 1920 and 1960, every year tens of thousands of people migrated voluntarily and on their own initiative from Ruanda-Urundi to Buganda. In this blog post I explain why migrants were willing to work for low wages in Buganda’s thriving cash crop economy by highlighting the exceptional labour abundance in the migrant sending regions and the benefits of circular migration.

Analyzing post-slavery labour markets in sub-Saharan Africa, economic historians have stressed the abundance of land relative to labour (e.g. Austin 2019). In such conditions, if an employer wanted prospective labourers to part with their independently cultivated farm, the argument goes, they either had to pay attractive wages or exert force, directly (forced labour) or indirectly (using taxes or other policies to push people into the labour market). Empirical evidence from real wage studies has largely corroborated this view (Frankema & van Waijenburg 2012). In this blog post, I analyze one peculiar case of labour market formation centered on Buganda in central-eastern Africa that appears to defy this logic.

Cash crops and labour in Buganda

Buganda, a kingdom on the shores of Lake Victoria, was incorporated into the British Uganda Protectorate. After the completion of a coastal railway in 1901, Buganda’s smallholders turned to the cultivation of cotton (and later coffee) in large numbers (De Haas 2017, summarized in this blog post). In preceding decades, Buganda had faced major demographic setbacks, as the result of civil war, epidemics and the loss of access to slaves. Unsurprisingly, as cash crop production expanded, labour soon became short in supply. Chiefs and the colonial administration resorted to forced recruitment and meagre payment to mitigate such shortages. Buganda’s forced labour system was highly resented by the local population. Moreover, due to large demands on a small labour force, the cotton take-off itself ran out of steam. Such pressures contributed to the abolition of the forced labour system in the early 1920s. With the labour supply curtailed, real wages immediately shot up.

These dymanics are consistent with a land abundant context. However, from the mid-1920s onwards the labour market changed radically, as large numbers of migrants began to arrive in Buganda (Figure 1). Their numbers added up up to c.100,000 annually, and they soon produced about half of Buganda’s cotton. As documented in the 1950s, a large share of these migrants originated from Ruanda-Urundi, a Belgian League of Nations mandated territory (Richards 1973). In a recent article, I use Francophone and Anglophone archives to explain the shifting dynamics of migration from Ruanda-Urundi to Buganda from 1920 to 1960. I explore the agency of migrants, highlight their responsiveness to shifting economic incentives, and stress the inability of colonial governments to control mobility.

Here, I will focus on wage dynamics, an issue of particular relevance to debates in economic history. Despite comparatively limited colonial force, by the end of the 1920s, real wages were back at their former low level, where they would remain until the 1950s (Frankema & van Waijenburg 2012; De Haas 2017). This development is paradoxical and peculiar in a comparative African perspective. Why were the migrants willing to work for low wages or sharecropping arrangements in Uganda’s indigenous cash crop economy?

Figure 1. Estimated annual rates of outmigration from Ruanda-Urundi to Buganda Why were migrants willing to work for low wages?

To solve the paradox of low wages in Buganda’s immigrant cash crop economy, we need to consider several factors. Most importantly, Ruanda-Urundi was by far the most densely populated territory, not just in the region but in Africa as a whole. It was also far from land abundant and labour scarce. Even before colonial rule, Rwanda had a class of “genuine proletarian day laborers”, whom would hire themselves out to “whomever would pay them in food stuffs” (Vansina 2005:130). In the early 1920s, right when migration took off, Belgian colonial officials remarked that “there is no labour problem in Ruanda-Urundi” and that “non-specialized labour is abundant and cheap”. Pre-colonial Rwanda and Burundi were also highly unequal societies, and the Belgians had few qualms about further entrenching the extractive powers of elites and forcing the local population into poorly remunerated forced coffee growing (as discussed by Sven van Melkebeke in this blog post), ridging and swamp reclamation projects. The territory, moreover, underwent several major episodes of famine in the aftermath of World War I, during the late 1920s, and again during the early 1940s. With such poor socio-economic conditions at home, it is unsurprising that a large proportion of the male population was willing to offer its labour cheaply elsewhere.

However, simply pointing at a disequilibrium of factor proportions and opportunities in sending and receiving regions cannot solve our paradox. If land was plenty on the receiving end, why did migrants not settle down in Buganda to grow their own cash crops, avoiding share cropping arrangements and low wages? Indeed, it was possible for migrants to obtain a farm in Buganda, and increasing numbers did so, especially after 1945. Initially, however, migrants had strong incentives to engage in circular migration. In the early 1920s, the Belgian Franc had depreciated sharply relative to the British Pound Sterling. As a result, the purchasing power of wages in terms of imported goods had declined substantially. The Belgian colonizers made full use of this depreciation, keeping wages and food prices in Ruanda-Urundi low in order to benefit its mining and settler farming operations in the Congo. Migrants, however, perceptively reaped windfall gains from uneven price and wage levels, for example by saving on food expenses in Buganda and bringing their shillings back home to purchase livestock or pay bride price.

As the Belgian authorities (under League of Nations pressure) abandoned their plans to use Ruanda-Urundi as a cheap source of food and labour for the Congo and as forcibly planted coffee plants began to yield returns, wage and price levels gradually converged with Uganda. By 1945, the nominal wage differential had practically disappeared (Figure 2). This is also the moment where we observe a break from male circular migration to more permanent family migration. While the 1931 census counted only one female for every 7 male Ruanda-Urundi migrants in Buganda, this ratio had declined to 1 to 2.3 in 1948 and 1 to 1.7 in 1959. As migrants increasingly settled on their own farms, Ganda employers saw their labour supply evaporate and wages increase. Consistent with our expectations, this undermined widespread support for immigration within Buganda, and made the position of strangers in society a contentious issue. 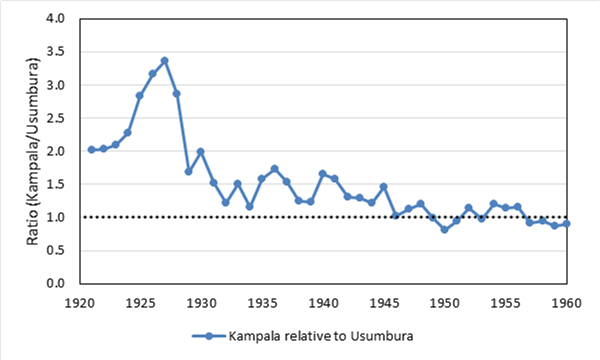 What has this case study yielded in terms of new insights on the formation of markets for free labour in post-slavery Africa? First, Buganda post-1920 does not conform to the consensus view that African labour market were formed in a context of labour scarcity. With the arrival of immigrants, Buganda also did not face a tradeoff between high wages or coercion. However, because this was driven by exceptional labour abundance in the main sending region, we can conclude that this is an exception that proves the rule. Second, this case highlights the importance of considering spatial and temporal interactions to understand labour market dynamics. Buganda saw such a large influx of labour that its wages were pushed back to a low level, a development that cannot be attributed to colonial force. That migrants kept pouring in nonetheless can only be explained by taking a close look at developments across the border. Only by placing wage rates in the two colonies in direct comparison can we understand the shift from circular labour migration of men to more permanent settlement of families.

Michiel de Haas is assistant professor at the Rural and Environmental History Group. He completed his Ph.D. with distinction at Wageningen University, with a thesis entitled Rural livelihoods and agricultural commercialization in colonial Uganda: conjunctures of external influences and local realities. His research focuses on the economic history of sub-Saharan…  Read more