Skip to content
Home › The Rise and Fall of the Bureaucratic Bourgeoisie: Public Sector Employees and Economic Privilege in Postcolonial Kenya and Tanzania

The Rise and Fall of the Bureaucratic Bourgeoisie: Public Sector Employees and Economic Privilege in Postcolonial Kenya and Tanzania

Do public sector employees in Africa form a disproportionate share of the richest ranks of society? In the early independence era, many scholars argued that an oversized bureaucratic elite was a hindrance to development as it crowded out entrepreneurial and commercial activity. This piece examines this charge in the Kenyan and Tanzanian contexts, and traces how the relative economic standing of public sector employees declined over the course of the postcolonial era.

In the 1960s, one of Africa’s economic and political predicaments was thought to be its overdeveloped public sector elite, which dwarfed the few members of a genuinely African commercial elite. Scholars argued that this would stifle economic development, as the bureaucratic bourgeoisie lacked the political independence, skills and incentives to develop an indigenous economic base (Fanon 1961; Shivji 1976).

In recent years a new literature has returned to questions of class and social stratification in Africa. Many have taken an optimistic perspective, highlighting the emergence of a new African middle class with a greater private sector orientation and entrepreneurial spirit than among previous generations (Mubila & Ben Aissa, 2011; Ncube & Lufumpa, 2015). So far, however, there have been few attempts to quantify this supposed shift.

In a recent article (Simson 2020), I assembled data from household budget surveys and educational tracer surveys to look at the changing sectoral composition of households at the top of the consumption or income distribution in Kenya and Tanzania. Dividing the consumption or income distribution into deciles and percentiles allowed me to examine the change in employment characteristics of those households that fell into the top 1% or top 10%. We can think of these two segments of the consumption distribution as representing the economic elite (top 1%) and a broader upper middle class (top 10%). Note that while both countries have conducted regular household surveys since the 1990s, earlier surveys of income are not methodologically consistent with the latter ones, and the earlier estimates are therefore subject to greater error.

This caveat aside, results from both countries show consistent trends. Since the 1970s the share of households in the top decile and percentile where the household head is employed in the public sector, has declined. Figure 1 shows where public sector-headed households fell throughout the distribution across different years in Kenya, illustrating how their concentration towards the top of the distribution has gradually declined. 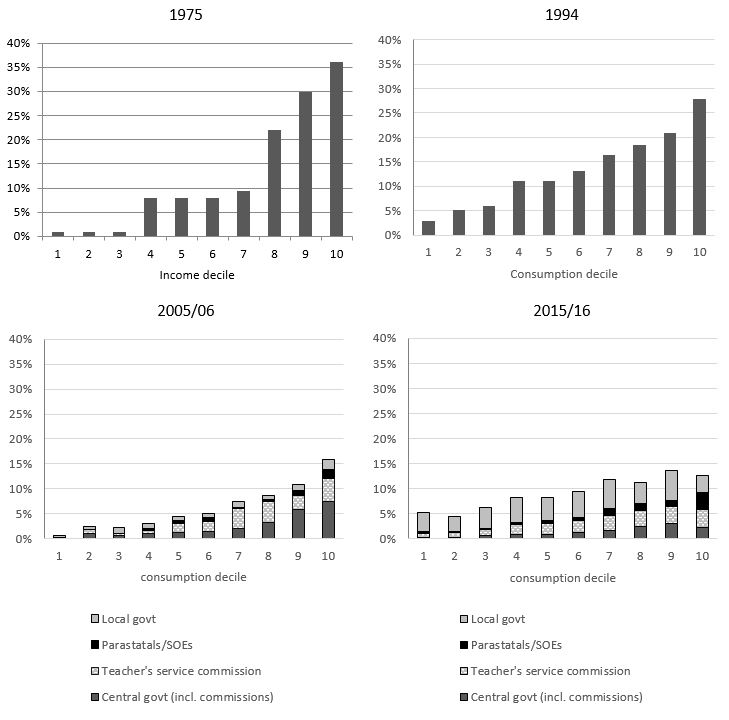 Notes: The data for 1975 is a recalculation as it builds on underlying wage group data divided into six rather than ten bins. I simply assume a linear distribution of incomes within each wage group, resulting in a flat distribution across deciles 1-3 and 4-6. Except for 1975, the distributions have been normalized by adults in household (o15).
Sources: Simson 2020, Supporting Material.

Table 1. Kenya: composition of the top income/consumption decile and percentile, by economic sector of the household head

Table 2. Tanzania: composition of the top income/consumption decile and percentile, by economic sector of the household head

This public sector decline was driven by two dynamics (more extensively explored in an earlier paper, Simson, 2019, and accompanying blog). In the first instance, real public sector salaries fell sharply between the 1970s and early 1990s, as governments in both countries faced budgetary crises and stopped adjusting salaries to the high rate of inflation. However, as earnings and employment opportunities declined in the private sector too, the effects of this was relatively muted. To resolve the problem of a large and unmotivated public sector workforce earning exceptionally low wages, governments began to rationalise the public service in the 1990s and divested from state-owned enterprises, which rapidly brought down its size relative to the labour force. This period of decline in the relative number of public sector employees to the total labour force accounts for most of the shrinking of the ‘bureaucratic bourgeoisie’. Today’s levels of public sector employees in the top decile in Kenya and Tanzania are in fact lower than in many advanced economies, such as the United Kingdom.

These results offer cautious grounds for optimism. It provides one lens on how the economic elite and broader middle class has changed in Kenya and Tanzania, since the 1970s, and particularly during the latest period of economic growth in the 2000s. This raises a new set of questions for the political economists: are these changes bringing new political interests and demands to fore that may herald a new type of elite political consensus?

Simson, R. (2020) ‘The Rise and Fall of the Bureaucratic Bourgeoisie: Public Sector Employees and Economic Privilege in Postcolonial Kenya and Tanzania,’ Journal of International Development, forthcoming.

Rebecca is the David Richards Junior Research Fellow in Economic History at Wadham College. Her research explores social and economic processes of change in postcolonial Africa, with a focus on social mobility, social stratification and elite formation since independence. Rebecca has a PhD in economic history from the London School…  Read more