Skip to content
Home › Was the wage burden too heavy? Profits and wages on European settler farms

Was the wage burden too heavy? Profits and wages on European settler farms

European settler expansion in Africa has been defined by Mosley as “colonisation of underdeveloped areas by European producers who became economically dependent on the indigenous population” (1983, p. 237). Europeans who decided to open up farms in Africa faced the challenge of securing access to cheap labor due to low population densities and a general reluctance among Africans to supply labor. A vast body of scholarly literature argues that European settler farmers were only able to flourish in places where extractive colonial institutions were established that directly or indirectly kept wages low (Acemoglu & Robinson 2012). So far, we lack empirical evidence that the profitability of European farming (partly) depended on the capacity to exploit local labor. This paper (Bolt & Green 2015) is a first attempt to relate the performance of settler farming to actual labor cost by analyzing the total “wage-burden” European farmers faced. The wage-burden is identified by measuring wage shares (the total amount paid in the form of wages as a share of total profits) on European farms in colonial Africa.

We use the settler farming community in Nyasaland (present-day Malawi) as our empirical case, and our results indicate that previous research has overstated the role of colonial policies related to the domestic labor market as a determinant of profitability of settler farms, while neglecting the role played by regional mobility of Africans and price changes on the global market.

Nyasaland, a British protectorate (1891-1963) never developed into a white settler colony. In 1921, there were 399 European settler farmers in the protectorate, which declined to 171 in 1945 (Palmer 1985). The view taken by most scholars is that European settlers failed to get strong support from colonial authorities, and after four decades of fluctuating performance, the sector largely collapsed in the aftermath of the 1930s Great Depression, except for a few tea estates. European farmers mainly blamed labor shortages for the meager performance and criticized the unwillingness of colonial authorities to implement policies that would increase the supply of labor.

This paper moves beyond the state-centered analysis by directly relating labor cost with the overall performance of settler farmers. We focus on both the tobacco sector and the tea sector, as these were the sectors in which most European farmers were active. From the colonial Blue Books we collected annual information on agricultural wages, acres under European cultivation, total amount of crops grown, total amount and value exported per cash crop, fertilizer and machinery expenditure, and information on transportation costs and employment in the tea and tobacco sectors between 1898 and the mid-1950s. Figures 1 and 2 combine the time series for the tobacco and tea sectors, respectively, providing information on how large expenditures on African wages and other inputs were relative to total revenue from agricultural production. 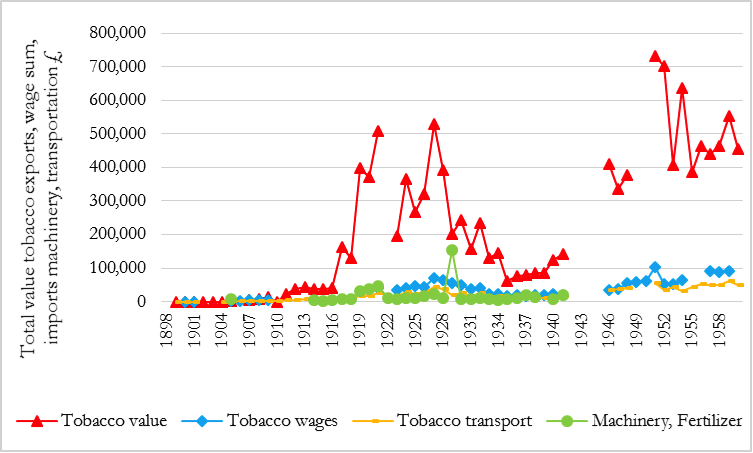 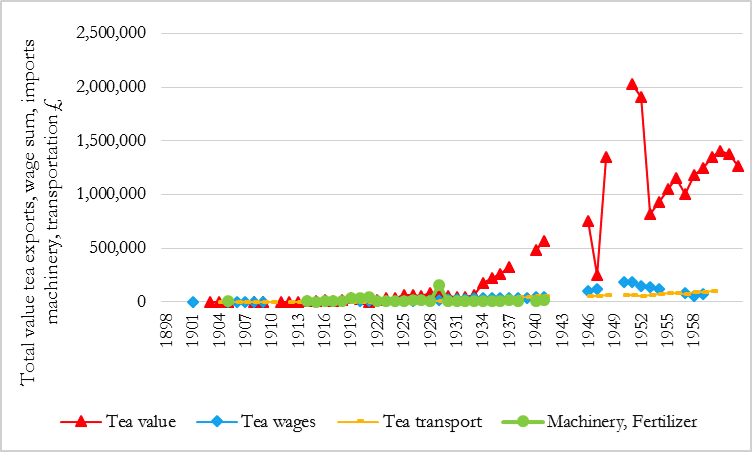 In contrast to the common held view, we find that European tobacco production in Malawi did not collapse in the 1930s. Figure 1 shows that after a decline in the total value of tobacco production during the 1930s, the sector experienced a second boom in the post-war period.[1] Tea production boomed in the 1930s, and the value of exports continued to increase throughout the colonial period (Figure 2). Our estimates show that both tea and tobacco farms initially had to spend a significant amount of the value created on wages to Africans (indicated by the overlapping of the total value and the wage lines), which verifies findings from previous research (Palmer 1985). After the initial period, however, neither the level of wages, nor the other costs of inputs seem to have been a constraining factor for the performance of either the tobacco sector or the tea sector. Even during the 1930s, when export earnings were at the lowest point in the tobacco sector, the total value of export earnings was still nearly twice the amount of total expenses.

The most important factor explaining the changes in wages and wage shares was not so much domestic factor market policies as it was migration during the pre-WWII period and the commodity price boom of the post-war period. During the initial years, settler farms struggled to gain access to (cheap) labor, and wage shares relative to total value produced were high. In the early years, wage laborers consisted of both Africans in the southern region and migrant laborers from the northern part of the protectorate. This source of labor was, however, rapidly declining as Africans began to migrate abroad to work in the South African mines and/or on farms in Zimbabwe. At the same time, more Africans began to cultivate tobacco and cotton on their own farms. Colonial authorities did implement policies aimed at facilitating Europeans’ access to indigenous labor in the early colonial period, like lowering taxes for Africans working on European farms. However, the policies were not sufficient to attract northerners to go to southern Nyasaland instead of abroad.

In the 1920s, colonial authorities began to abandon settler-oriented policies to facilitate African commercial production. At the same time, however, the inflow of Lomwe people from Portuguese Mozambique to Nyasaland increased substantially, and they started to provide labor services on the European estates. So instead of facing increased labor shortages and rising wages due to government policies, European farms in fact experienced an increase in the labor supply and stagnant wages, which boosted agricultural profitability.

The situation changed again in the mid-1940s when various new colonial policies stimulated emigration from southern Nyasaland, causing labor shortages and sharply increasing domestic wages. However, these wage increases did not pose a serious threat to the profitability of the tea and tobacco sectors. Profits after WWII increased (much) faster than wages (i.e., the wage share declined) as international coffee and tea prices increased significantly in the 1940s and the first half of the 1950s. The commodity price boom enabled European farmers to capture a larger part of the rent despite decreasing supplies of local laborers and a colonial state that actively took measures to prevent the further expansion of the settler economy.

[1] The graph represents the value of production. The total amount of tobacco produced increased to one and a half times the levels of pre-1930 production.