How have households in developing countries historically coped with shocks to their labor supply? Time is often the most valuable resource available to poor households, and its allocation across labor and other tasks is a crucial coping mechanism used by the poor in response to changing circumstances of income and health. Despite this, much of the time available to these households has been tied up in unproductive or strategic activities such as defending property or hiding income. What has led households to allocate labor the way they do—and what constraints have they faced in minimizing the impact of adverse shocks?

A window into the household

The anthropologist Jack Harris visited the Southern Nigerian village of Amankwu in Igboland (see map of Eastern Nigeria in 1954) between 1939 and 1940. He collected information on the daily activities of a sample of Igbo villagers. We use his field notes to create a panel of time-use data that covers more than 6,000 person-days. These reports are rare not only for their high frequency, but also because in contrast to many modern studies of time use, they also provide a rich body of descriptive evidence on individuals’ motivations for their actions. 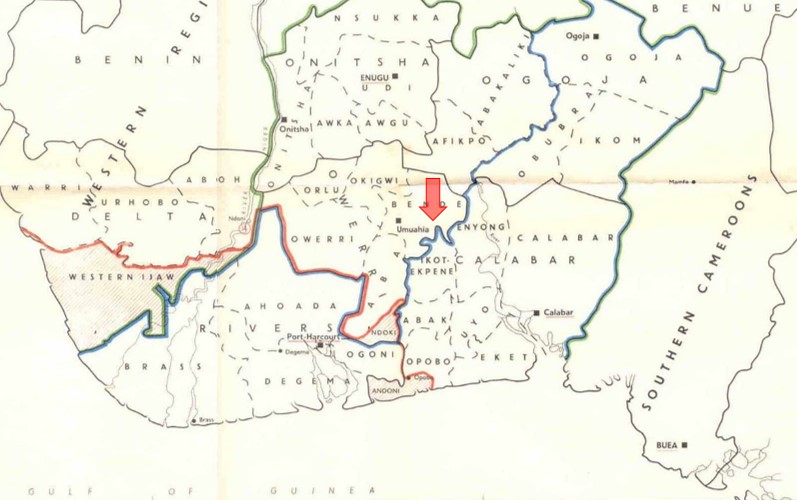 During the period described in Harris’s notes, the Igbo lived mostly in small rural communities practicing bush-fallow agriculture in which tasks were highly seasonal and labor subject to a strong gender division. In this system, there was considerable complementarity between men’s and women’s tasks, in which an increase in one individual’s labor increased the marginal product of the other individual’s labor. This existed both within and across seasonal periods. For men, farming focused on yam cultivation, while women planted crops such as maize, cassava, and cocoyams. These crops were in turn owned separately by the husband and wife, and each had seasonal responsibility for feeding the household. As such, women’s control over food could be a source of influence over men. Similarly, the tasks performed on the farm varied by gender, with men typically responsible for clearing, planting, training, harvesting, and storing yams, and women responsible for planting their own crops, weeding, and carrying in the harvest. Children helped with farming from an early age and were given opportunities to learn and gain independence in cultivation. Although subsistence agriculture made up the bulk of economic activity for colonial-era Igbo households, there were also opportunities for petty and long-distance trade, and in the production of the region’s principal commercial products, palm oil and palm kernels.

First, we look for complementarities in household labor and employ two main strategies. We test whether, when one individual falls ill, the labor inputs of others in the household rise to compensate, as would be the case if labor were easily substitutable. Then we test whether spouses and parent-child pairs within the same household coordinate their activities over and above what is predicted by the annual agricultural cycle.

Second, we also ask whether households misallocate time in ways that may be strategic to individual members, but lead to inefficient outcomes at the household level. Following the Basu (2006) model of intra-household allocation, wherein bargaining power is endogenous, we look for evidence of household members over-engaging in activities that improve their weight in the household decision process. For instance, in our data, visible contributions to the cultivation of specific crops establishes claims over their consumption, a phenomenon which results in the wasteful duplication of effort and the allocation of time to tasks in which individuals have no comparative advantage.

Using a difference-in-difference approach that nets out unobserved heterogeneity across individuals and days in the year, we find that illness shocks impose time costs that follow the gender division of labor, leading individuals to reduce work on a wide set of tasks. However, there is little evidence that the healthy spouse or child of an individual facing an adverse health shock compensated for the work of the sick individual in order to maintain household output.

Ethnographic evidence suggests that whether individuals could respond to illness by recruiting substitutes depended on their social standing, urgency of work, and type of illness. For instance, the village elder, Egwuonwu, who was chronically ill and considered too old to work, had no trouble recruiting his daughter-in-law, Mmeziri to manage and perform the bulk of his farm work; meanwhile, the marginal Ugwade, who suffered periodically from venereal disease and domestic abuse, received next to no help when incapacitated.

These findings regarding labor substitutability in response to illness can be accounted for by complementarities in household labor. We show in additional results that spouses and parent-child pairs coordinated their activities over and above what would be predicted by the agricultural cycle by engaging in the same tasks on the same day. The ethnographic evidence, too, provides many instances of cooperative (in the case of spousal) and childcare-oriented (in the case of parent-child) working patterns.

Do individuals allocate time to uses that have lower returns, but that increase their claim to household resources? Do higher-ranking individuals prevent other household members from undertaking activities that would increase the latter’s future power? While there is no clear quantitative evidence of such misallocation, the descriptive evidence, by contrast, provides multiple examples of strategic time use that diverts effort from more productive allocations and results in the wasteful duplication of tasks—all in order to meet aims other than the maximization of household income.

For example, in defiance of his comparative advantage, Cikia grew women’s crops in order to increase his bargaining power vis-à-vis his mistress and female relative. Meanwhile, Ezeala seeked to punish his wife for accidentally spilling palm wine by refusing to let her go to market, where she could earn cash income for herself and the household’s benefit. Resources were not pooled and shared fully; ideas of “yours” and “mine” apply within households, and disputes about food often hinged on the degree to which someone had contributed to its production. To wit, Mba claimed that he should have been able to eat his wife’s corn because he helped in preserving it. The sharing of resources within the household was therefore often described not as a basic expectation, but as a kindness or favor.

Households miss opportunities to economize on available labor because of this strategic misallocation of time. For instance, in many cases, a woman will care for her sick child rather than doing other work, even though another co-wife is already caring for her own child at home. This divided approach of different groups of mothers and their children within the same household was also noticed by anthropologists in their writings on the Igbo. In one more telling example, the child Cikia uses money earned working on others’ farms to secure the financial independence needed to disobey his father, and eventually, to run away indefinitely, leaving the old man and his farm to the care of his child daughter-in-law.

Together, the failure to regularly substitute labor in response to illness, the prevalence of tasks performed on the same day by spouses, and the coordination of labor between parents and children that we observe are consistent with task specialization given in part by the gender division of labor. The strategic misallocation is consistent with endogenously-formed bargaining power per Basu (2006).

Individual shocks and the ripple effects of lost time

The lack of labor substitution in response to illness and the coordination of labor between spouses together make illness especially costly: when one individual falls ill, those who are well are less able to use their time productively. This may amplify income losses due to health shocks. Strategic misallocation of labor, similarly, limits efficiency. Such constraints on labor, whether based in culture, the technology of agricultural production, or both, contributes to low levels of welfare in colonial and similar contemporary African households.

* The map displayed was originally produced by the Willink Minorities Commission of Nigeria (1957-58).

Vellore Arthi is a Lecturer (Assistant Professor) at the University of Essex, and recently completed her doctorate at the University of Oxford. Her research focuses on household labor, early-life health, and human capital formation in developing-country and historical settings.  Read more

James Fenske is a Professor at the University of Warwick. His research focuses on economic history and development economics. He was awarded the 2016 Wiley Prize in Economics for his work in the field of Economic History, in particular quantitative economic history of Africa.  Read more