African Long-term Inequality Trends, AFLIT, is a research network dedicated to the advancement in constructing and analysing historical inequality trends in sub-Saharan Africa using the social tables approach. Currently, we lack both the empirical and theoretical understanding to explain the historical underpinnings of the development in inequality. The researchers in AFLIT are committed to filling this gap.

To date, AFLIT covers twelve diverse African countries. It includes the former British colonies Ghana, Tanzania, and Uganda with burgeoning cash crop economies; Botswana and Malawi with lower levels of colonial development; Zimbabwe and Zambia with a relatively sizable European settler population; the island states of Zanzibar and Mauritius; the former French colonies of Ivory Coast and Senegal; and the populous and heterogeneous Nigeria. Comparative work is also on the way to complement the in-depth country studies and the underlying data will be published in a searchable database.

Seminal contributions by Milanovic (2016) and Piketty (2014) on global inequality have renewed the interest in historical trends and their relation to globalization and capitalism.

However, existing studies are heavily skewed towards Europe, the United States and parts of Asia. Meanwhile, publications on historical inequality in Africa remain few and scattered. As long as the African experience is missing from the debate, it is questionable to what extent present theories based on the experience of Europe and North America are helpful for either Africanists or the analysis of global inequality trends.

The omission of African countries has been tied to the paucity of data. To address data limitations, AFLIT researchers apply a social tables approach (Milanovic et al. 2011). Based on the combination of collected and constructed time series paired with qualitative material, the population is divided into income groups, so-called social classes. Finally, each class’ share of the population and average income are estimated.

The approach is advantageous for several reasons. First, it is useful when data on individual wages and occupation are scarce. Second, it can be used to construct a range of inequality measures including Ginis, Theil indices and income shares. Third, by constructing social tables over consecutive years, we can follow changes between social classes over time and determine long-term inequality trends.

To date, AFLIT researchers have constructed social tables and Gini estimates for five countries: Botswana, Ghana, Ivory Coast, Senegal and Uganda, presented in Figure 1. The studies provide information on changes in income levels at an unprecedented level of detail and depth. The results partly support existing literature on the development of long-term inequality during the colonial era, and partly confront existing perceptions. Below, we briefly summarise critical findings. 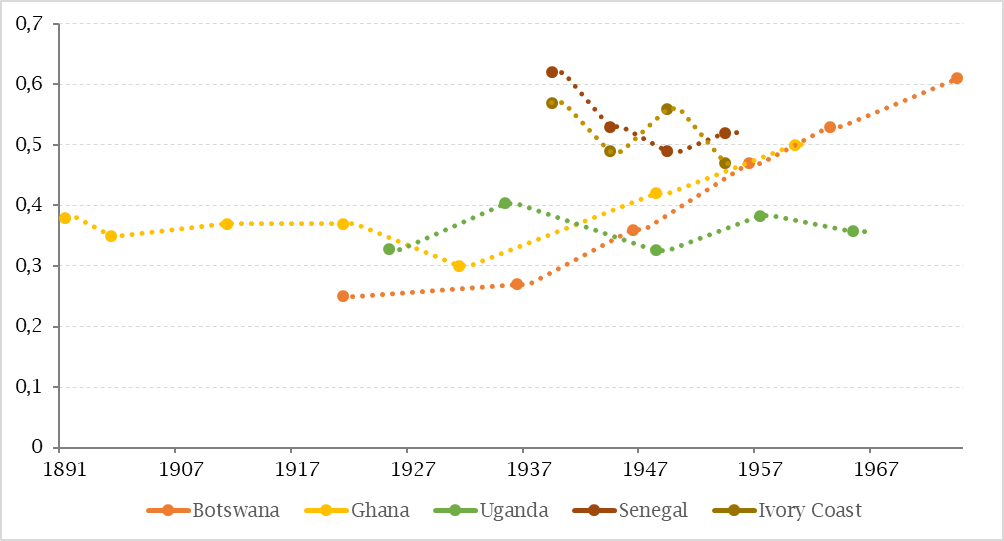 Today, Botswana is known as a diamond-led growth miracle with relatively high levels of economic inequality commonly associated with the post-independence era. However, we show inequality was high before diamond extraction. A sharp increase in inequality started already in the 1940s due to the polarization in the cattle sector and increasing wages for government officials. (Bolt & Hillbom 2016).

Rural differentiation existed in late pre-colonial Ghana, prior to the adoption of cocoa cultivation. Thereafter inequality first remained stable but increased in the second half of the colonial era due to economic expansion prior to the 1930s and increasing cocoa prices in the 1940s. In addition, cocoa-led growth provided new yet limited opportunities in the wage sector, which exacerbated inequality levels (Aboagye & Bolt 2020).

Colonial Uganda had a rapidly expanding export economy, founded on cotton and coffee grown by African smallholders. In contrast to Ghana, inequality was remarkably stable throughout the period 1925-1965. Low inequality levels is explained by Uganda’s reliance on labor-intensive export crops with limited potential for capital accumulation, and by its favorable resource endowments, providing the rural population with the means for self-provisioning (de Haas 2020).

In the 20 years before independence, income inequality in Senegal and Ivory Coast was higher than in the other colonies. In Senegal, the administrative centre of French West Africa, levels were especially triggered by huge income differentials between Africans and European settlers. Meanwhile, in the Ivory Coast, the expansion of commercial agriculture in particular caused high inequality trends within the African population (Alfani & Tadei 2019).

These findings demonstrate a high degree of variation in income inequality across Africa. With future research, we aim to elucidate the factors underpinning the variation and contribute theoretical propositions explaining drivers of long-run inequality.

Maria Fibaek is PhD Candidate at the Department of Economic History at Lund University. Her research focuses on long-run changes in rural livelihoods and welfare in East Africa.  Read more