The ILO and the Making of Labour Policies in Colonial Nigeria

To what extent were labour policies in late colonial Africa influenced by the activities of the International Labour Organisation (ILO)? By analysing Nigeria from 1930-1960, as opposed to the empire-wide or regional focus of the extant literature, this article finds that the ILO, despite its institutional constraints, exercised indirect influence on labour relations in Nigeria through the trade unions. Thus, the article emphasises the significance of local contexts to a more nuanced understanding of the ILO’s influence in colonial Africa.

The International Labour Organisation was established in 1919 to address some of the biggest challenges affecting wage earners worldwide. The ILO introduced major conventions and recommendations targeted at improving the socio-economic conditions of workers in the colonial empires, beginning with the Forced Labour Convention of 1930. Many studies have concluded, however, that the ILO’s general inﬂuence on labour policies in colonial Africa was weak for three reasons (Cooper 1996; Bellucci & Eckert 2019; Maul 2019). First, the ILO was incapable of policing its standards in the member-states and the colonial territories. Second, some ILO oﬃcials were colonial apologists who peddled racially-biased opinions on African labour productivity as late as 1958 (ILO 1958). Third, colonial powers often endorsed conventions aimed at improving African labour conditions at the annual International Labour Conferences (ILCs). However, they were allowed by Article 35 of the ILO constitution to delay or significantly modify such conventions to suit local socio-economic conditions.

Colonial Nigeria and the ILO

Despite the widespread acceptance of these conclusions, little is known about the domestication of ILO standards and their impact in individual African colonies, whereas Africanist historians are increasingly acknowledging that local contexts and agency often inﬂuenced colonial government decisions (Austin 1988; Osborn 2003; Bolt & Gardner 2021). This article zooms in on Nigeria, Britain’s most populous African colony, by analysing new primary sources from the ILO archives in Geneva. The sources show that the ILO began to play a growing role in colonial affairs from 1930. There were linkages between the activities of the ILO (its ILCs, conventions, and recommendations) and labour policy-making in Nigeria. Post-1930s Nigerian labour ordinances (on wages, working hours and rest, social insurance, collective bargaining, etc.) were adapted from ILO conventions. ILO member-states were also mandated to collect data on labour conditions within their colonies (for instance, unemployment statistics, see Table 1). This largely unmined data source represents a new frontier in the cliometric turn in African economic history (Fourie & Obikili 2019).

Trade Unions and the Application of ILO Standards

Despite the similarities between the Nigerian labour ordinances and the ILO conventions, there were very few mechanisms for their full implementation until the late 1940s. Frederick Cooper argues that the colonial governments began to apply ILO conventions due to the post-Second World War “internationalisation” of the labour question, that is, the pressure exerted by the United States and other non-colonial European powers on colonial powers in Geneva (Cooper 1996). In addition to the external push, my article finds that Nigerian trade union agitations also prompted the domestication of labour policies. The capacity of the trade unions to influence colonial government decisions grew during the 1930s, as they became more radical and nationalist-oriented, and their membership increased (Table 2). 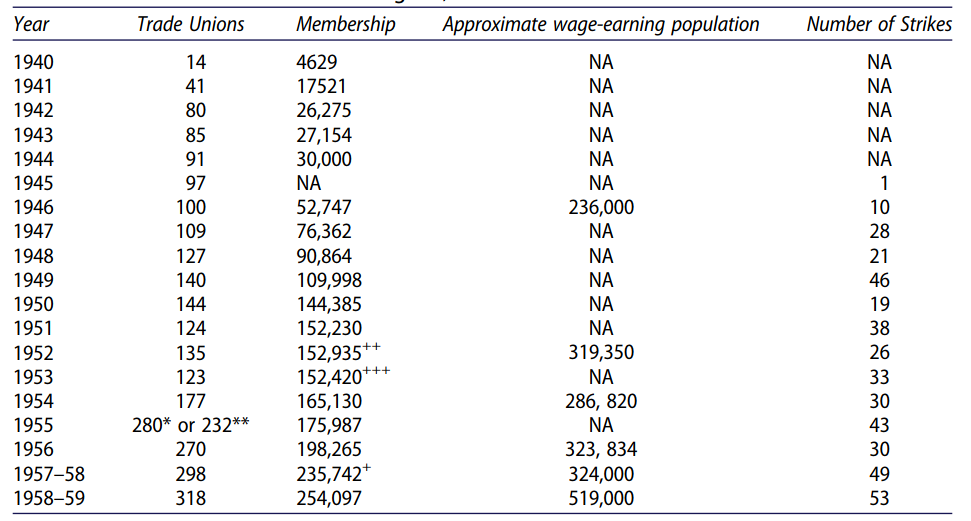 Nigerian trade unions were very much aware of international labour standards and used them as the basis of their demands for improved working conditions (including higher wages; overtime pay; cost-of-living and post-adjustment allowances; and migration and breadwinner benefits) during their frequent strikes. The trade unions ensured that the ILO was aware of the state of labour conditions in Nigeria through their correspondence and publications (particularly The Nigerian Worker), which they mailed to Geneva. Similarly, the ILO sent copies of its annual reports to the unions. What is more, from the early 1940s, the ILO invited Nigerian trade union leaders to participate in ILO meetings (for instance, in Philadelphia in 1944), and to serve on committees of experts, with the goal that inputs from these colonial labour leaders would shape future ILO conventions and recommendations.

Trade Union Rivalries and the Failure of Internationalisation

Despite the ILO’s institutional weaknesses, its influence was sustained during the early 1940s through its relations with trade unions. Unfortunately, the unions became less interested in international relations from the mid-1940s. Between 1945 and the late 1950s, Nigerian trade unions continuously turned down opportunities to participate in ILO events, join the ILO as “associate member”, or serve on committees of experts. This was partly because they were engaged in domestic anti-colonial struggles and partly because of intra-union and inter-union leadership tussles. One consequence of disunity was that, as late as 1958, they could not agree on their consensus representatives to ILO meetings. There are many publications on trade union rivalries in other British colonies in Africa and the Caribbean (Hart 2002; Zeleza 1993; Freund 1984). However, more research is required to know whether these rivalries had a similar impact on the influence of the ILO in the colonial world.

Wage-earners in colonial Nigeria have been a subject of historical research for nearly 60 years, beginning with A. G. Hopkin’s seminal analysis of the Lagos Strike of 1897 (Hopkins 1966). However, all previous studies have mainly focused on the colonial government (the largest employer of labour in the formal sector) and the wage workers. The impact of the ILO was limited, but it was, as my article finds, an important agent in the colonial Nigerian labour policy-making process. Nigerian labour policies were adapted from ILO Conventions, while the Organisation also provided largely unexploited opportunities for Nigerian trade unions to shape colonial labour standards on the international stage. My article thus contributes to Nigerian labour historiography by adding perspectives from an international organisation while also serving as a rare local-level analysis of the impact of the ILO in colonial Africa.

Adebayo, Adewumi Damilola (2022). “The ILO and the Political Economy of Labour Policy Making in Nigeria, 1930–1960.” Journal of Imperial and Commonwealth History: 1–35.

Shashore, B. B (2018). Journey of an African Colony, The Making of Nigeria. Documentary. Netflix.

Zeleza, Tiyambe (1993). “The Strike Movement in Colonial Kenya: The Era of the General Strikes.” Transafrican Journal of History 22: 1–23.

Featured image: Still image from Episode Six of B. B. Shashore, Journey of an African Colony, The Making of Nigeria, Documentary (Netflix, 2018). The image is unnamed and undated. However, it is an image of workers’ mobilisation during the Nigerian General Strike of 1945.

Damilola Adebayo is an Assistant Professor at York University. He is a historian of Anglophone West Africa, particularly Nigeria. His interests are at the intersection of socioeconomic life (including labour and labour unions), science and technology, and international organizations in Africa.  Read more