Sub-Saharan Africa has been absent from recent histories of long-run growth owing to a lack of data from before 1950. In this paper, new annual estimates of GDP per capita for eight African economies from the period since 1885 raise new questions about characterizations of the region’s economic performance.

Research on African economic performance has often focused on the question of why Africa has underperformed other regions. The only available data on Africa’s long-run economic performance began in 1950, and showed that most African economies had grown little between 1950 and 2000. Conversely, a resurgence of economic growth since 2000 prompted new questions about what changed and whether Africa had finally turned a corner.

In other regions, historical national accounts have extended our knowledge of patterns of growth and development over centuries into the past (Broadberry 2021). In a recent paper, we (Broadberry & Gardner 2022) present annual estimates of GDP per capita in countries spread across Sub-Saharan Africa for the period 1885-2008, encompassing both the colonial and post-independence periods. The data are available on the AEHN website and in Appendix 1 of the paper.

The absence of annual data on per capita incomes in Africa over the long-run has limited Africa’s appearance in comparative historical work on economic growth and development. Prior to the publication of our paper, South Africa was the only country for which there existed annual estimates for the Cape Colony (Fourie & van Zanden 2013).

We use economic data collected by colonial governments to reconstruct historical national accounts for eight countries (Ghana, Nigeria, Kenya, Uganda, Malawi, Zambia, Zimbabwe and South Africa) from across Sub-Saharan Africa to reconstruct annual measures of GDP per capita for before 1950. We then splice these estimates onto existing series from 1950 onwards to create annual estimates of GDP per capita for the colonial and post-independence period.

We then splice our pre-1950 estimates onto Maddison’s data for 1950-2008. These data have been the subject of numerous critiques, so we checked them against original national accounts produced by each of the countries in our sample and found them to be a close match.

Our annual series provide a more detailed picture than previous estimates for the colonial period, which have been restricted to benchmark years (see, eg, the pioneering work of Prados de la Escosura 2010) or single countries (Jerven 2014). The data show that many African economies had per capita incomes above subsistence from at least the late 19th century.

As an example, Figure 1 compares the growth trajectories of Ghana, Nigeria and South Africa. It shows that the three countries were comparable in terms of their levels of income during the late 19th century. Ghana kept pace until the interwar period, when the expansion of South Africa’s manufacturing sector provided the basis for more sustained growth in the latter country.

Our data also show, however, that overall gains in per capita income were limited due to repeated periods of negative growth, or shrinking. Studies of other regions suggest that the transition to sustained growth depends not so much on increasing the pace of growth as on reducing the frequency and severity of periods of shrinking (Broadberry & Wallis 2017). 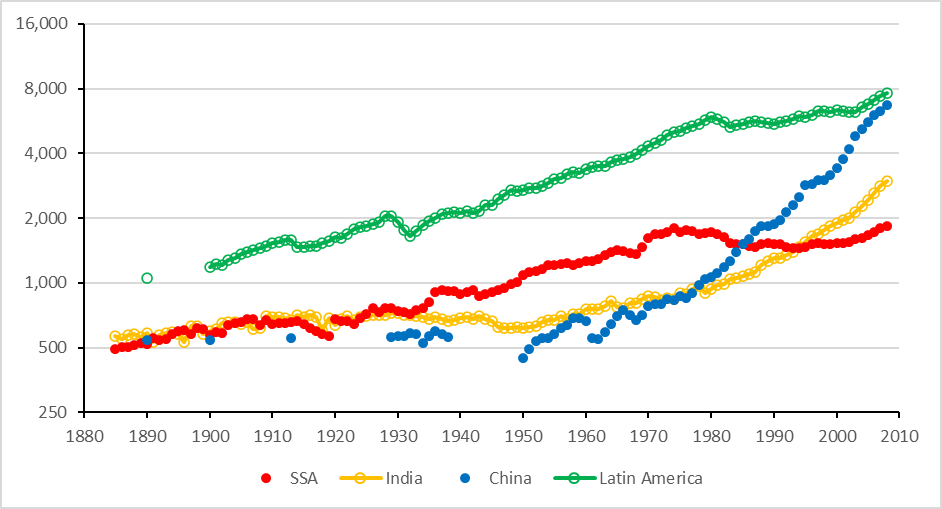 Table 1 shows the average rate of change of per capita income during periods of both growing and shrinking, comparing African economies to that of the UK. It shows that while African economies grew faster than the UK through most of the period, they also shrank faster and more frequently.

Table 1: Average rate of change of per capita income in growing years and shrinking years in Africa and the United Kingdom 1885-2008 (% per annum) 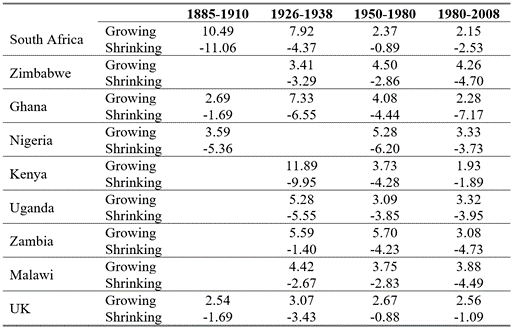 This is not yet a complete picture of African growth. The sample of countries include only British colonies. Colonization was not random, and it may be that the economic performance of British colonies was systematically different from countries colonized by other powers or those which remained independent. However, it does provide several lessons for those interested in Africa’s long-run development.

First, it is possible to use historical data to reconstruct historical national accounts for Africa, and this paper is intended to inspire further studies on other parts of the continent so as to bring the continent more firmly into narratives of long-run growth.

Second, the paper calls for greater attention to the causes and consequences of periods of shrinking. Studies of African economic development have tended to focus on growth – either explaining its absence, or proposing methods to increase its rate. However, our data suggest that long-run gains in per capita income have been undermined not by a lack of growth but by the frequency of shrinking.

Stephen Broadberry is a Professor of Economic History, Oxford University, Director of the CEPR Economic History Programme and a theme leader at CAGE, University of Warwick. His books include British Economic Growth, 1270-1870, co-authored with Bruce Campbell, Alexander Klein, Mark Overton and Bas van Leeuwen (2015) and The Cambridge Economic…  Read more

Leigh Gardner is an Associate Professor at the Department of Economic History at the London School of Economics. Her research focuses on the economic and financial history of sub-Saharan Africa during the 19th and 20th centuries, with an emphasis on Africa’s global connections. She is also a Research Associate at…  Read more