To what extent did sub-Saharan Africa's 20th century schooling revolution benefit boys and girls equally? Analyzing consecutive birth cohorts in 21 sub-Saharan African countries over the 20th century, we find that gender gaps first rose and then declined as education expanded. Gender gaps are lower in southern Africa and in districts with early 20th century missionary presence and which are more accessible (located on the coast, or connected to railroads).

While sub-Saharan Africa has a poor and erratic record of economic growth over the long 20th century, its sustained expansion of education is beyond dispute.  Average educational attainment increased from 0.2 years of schooling in 1900 to 2.3 in 1970 and 5.7 in 2010 (Barro & Lee 2015). Despite this significant progress, SSA’s educational expansion was highly uneven, with certain regions and particular sections of the population benefiting earlier and more than others.

In a recent study (Baten, de Haas, Kempter & Meier zu Selhausen 2021) we analyze educational gender inequality in Africa using a birth-cohort approach, covering most of the 20th century, connecting the colonial with the post-colonial era. We analyze gender gaps in education at three levels:

At the beginning of the 20th century sub-Saharan Africa exhibited the lowest gender gaps, measured in years of schooling, compared to the Middle East and North Africa (MENA), South Asia (SA) and South East Asia (SEA) (Figure 1). In the early 20th century, a bit later in sub-Saharan Africa, average educational gender inequality increased everywhere, peaking between 1.5 and 2.5 years of schooling. By the 1980s, Africa displayed the highest gender disparities, despite significant post-colonial closure of the gender gap. 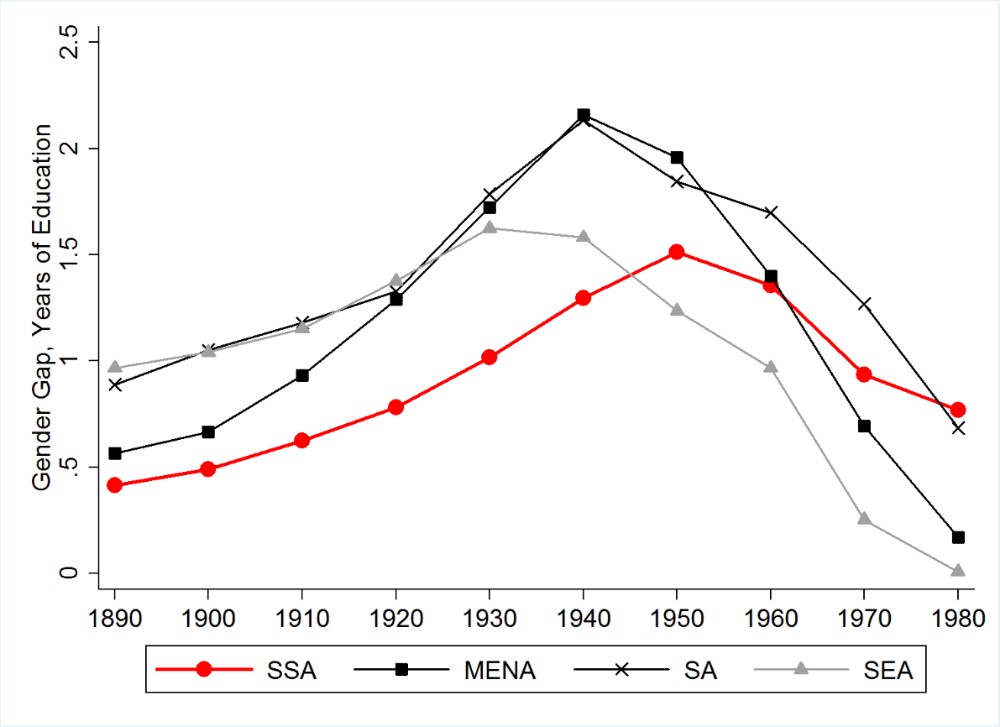 Absolute educational gender gaps provide insight into the unequal accumulation of human capital between boys and girls, but they are more meaningfully interpreted in relation to overall educational expansion. In Figure 2, we therefore express the gender gap in relation to the number of years of education received by boys. Across world regions, this exercise reveals a consistent inverted-U trajectory, which we refer to as ‘educational gender Kuznets curve’. In this perspective, Africa’s performance in terms of gender equality in education no longer comes out as particularly poor. Consistently across world regions, gender disparities first rose as male education expanded, and then declined at 4-5 years of male education. This is also true for sub-Saharan Africa. In fact, throughout its educational gender Kuznets curve, sub-Saharan Africa performed comparatively well. Educational gender inequality in Africa today is still high not because of an exceptional tendency to favor boys, but because educational progress is slow in general, and it is still in its early phases. 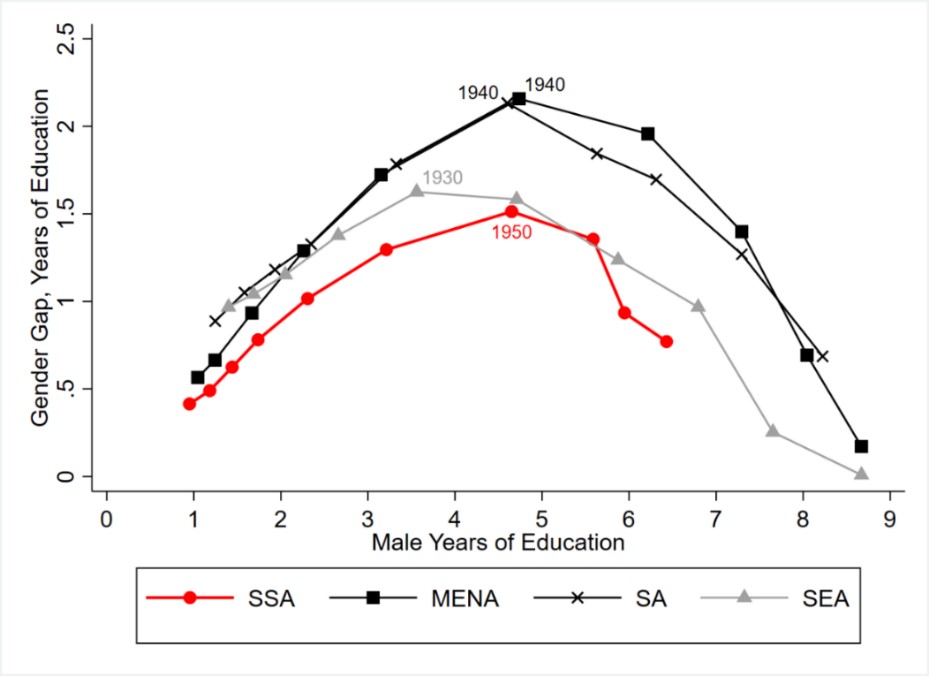 Results of our African cross-country comparison confirm this pattern of an inverted U-shaped educational gender gap trajectories. Almost all of the observed countries saw an initial increase of their gender disparities until the mid-20th century followed by a levelling off or decline. However, countries in southern Africa (South Africa, Botswana, Lesotho and, to a lesser extent, Zimbabwe) had remarkably low or even reversed gender gaps throughout the 20th century. This is a striking similarity, since the educational systems of these countries and the degree of overall educational expansion differed markedly between them, despite their geographical proximity. Male absenteeism due to cattle herding and male labor migration for mining activities are likely candidates to explain this more gender-equal south African pattern, as women were left behind and may have benefited from their relative immobility in terms of (missionary) school attendance.

Our world region and country-level analysis builds on an existing literature comparing  educational gender gap trajectories at the country-level (see, especially, Barro and Lee 2015). Much less explored is the variation of educational gender gaps within countries, even though these may be expected to be large. To explore sub-national variation, we dig one layer deeper, exploiting the detail provided by IPUMS-curated census data to analyze gender gaps at a fine-grained sub-national region level (Figure 3). Since administrative boundaries change between censuses, we could not consistently trace the ‘educational gender Kuznets curve’ over time. Instead, we created short birth-cohort panels. We respectively use two decades jointly to analyze three periods (1920-39, 1940-59, 1960-1979) in a multivariate regression framework applying the Least Squares Dummy Variable (LSDV) estimator. 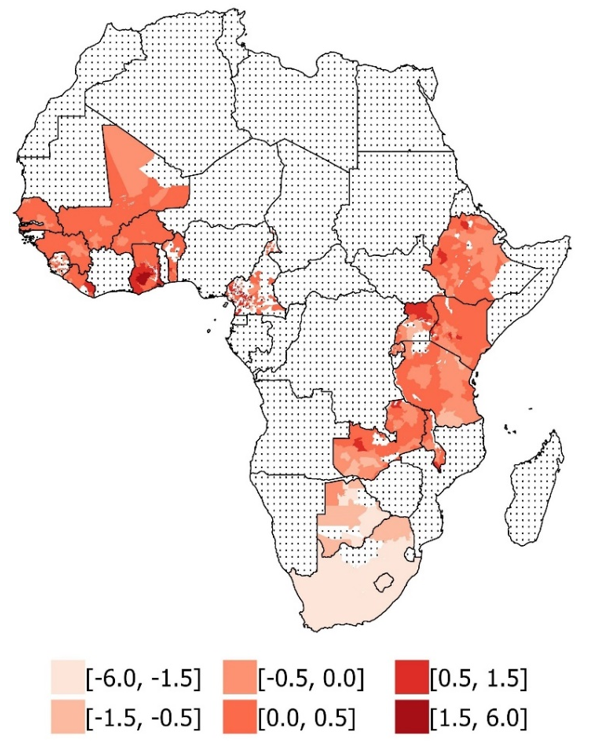 In depth-analysis showed that better connected areas on the coast, with early access to railroads, and those harboring urban locations achieved greater gender equality in schooling than more remote locations. This supports the idea that increased openness benefited African girls’ education throughout the 20th century. We also find that in districts which formed the heartland of missionary presence in the early 20th century (both Catholic and Protestant), gender gaps were lower throughout the entire period that we studied, even long after mission schools lost their monopoly in British Africa in the late colonial period (Frankema 2012; Cogneau & Moradi 2014; Meier zu Selhausen 2019). Conversely, we did not find consistent correlations between educational gender gaps and cash crops, agricultural systems, Islam or family systems.

Addressing Africa’s educational gender gaps today is contingent on a good understanding of their drivers, which in turn requires a long-run perspective. Indeed, educational gender gaps were highly dynamic over the 20th century, increasing rapidly in the early phases of educational expansion, before stagnating or declining in later phases. The bright prospect then is that, as overall education expands further, girls are likely to benefit disproportionally, even without specific policies targeting gender discrimination.

At the same time, we show that countries and regions move through their educational gender Kuznets curves in different ways, some experiencing much larger gaps and slower convergence than others. Our sub-national analysis suggests that closer integration of marginalized regions in national and regional economies will plausibly contribute to more gender equality in educational attainment. Moreover, the persistent correlation between early colonial missionary presence and education gender gaps illustrates how strong and lasting specific local investments in education can be, while also testifying to their limited diffusive effects beyond specific locations.

Cogneau, Denis, and Alexander Moradi (2014). “Borders That Divide: Education and Religion in Ghana and Togo Since Colonial Times.” Journal of Economic History 74(3): 694–729.

This blog first appeared on the N-IUSSP blog.

Elisabeth Kempter is a PhD student at the Economics Department of the University of Tuebingen.  Read more

Felix Meier zu Selhausen is an Assistant Professor in the Social and Economic History Department at Utrecht University (Netherlands). His research lies at the intersection of economic history, development economics and demography. In particular, his research focuses on the relationship between religion and socioeconomic development in Africa and gender relations…  Read more