Skip to content
Home › Elite Violence and Elite Numeracy in Africa from 1400 CE to 1950 CE: Evidence from an African Game of Thrones

Elite Violence and Elite Numeracy in Africa from 1400 CE to 1950 CE: Evidence from an African Game of Thrones

How can we trace early African development? To gain insights, we constructed a new long-term and regionally comparative data set from 1400 to the 20th century based on two core concepts of economic and human development, namely, elite numeracy and elite violence.

Several recent studies have argued that human capital formation among elites is crucial to economic development – for example, resulting in a system of trading cities and merchants who coordinated long-distance trade (Squicciarini & Voigtländer 2015; Baten & van Zanden 2008). However, these studies have so far been limited to Europe. Exploration of the “Great Divergence” between Europe and Africa has so far been limited by the unavailability of data on elite human capital development. In the case of Africa, this lack of evidence has also implied that dynamic developments in the continent’s past have been overlooked as many scholars and the public have perceived it as a consistently poor region throughout history.

In our recent article, we trace the long-term development of human capital among African elites by estimating elite numeracy using a new proxy based on the share of rulers for whom a birth year was reported in standard biographic sources (Baten & Alexopoulou 2022). For most rulers, the years of reign were reported as well as important wars during their reign. We argue that a ruler’s birth year was regularly reported and entered into historical chronologies only if elite bureaucracies around the ruler were capable of easily processing numerical information. Otherwise, it was simply forgotten or not recorded. This indicator has been successfully applied to study European, South Asian and Middle Eastern elite numeracy, and many potential caveats have been studied, such as the issue that more famous rulers might have been better documented (Keywood & Baten 2021; reviewed in Baten et al. 2021).

We have also approximated elite violence using a similar proxy indicator, namely, the share of rulers who were killed in battle or during other occasions of interpersonal violence, typically by murder at the hands of family members or competing nobility. Studies on the well-documented European continent found that this can serve as a proxy indicator for violence among the entire elite group. Murder, particularly of a central figure, created an atmosphere of fear in society (on recent evidence of the external effects of murder, see van Zanden et al. 2014). Moreover, after the repeated killings of rulers, specific value systems often developed, which defined violent elite members as persons of honor who would react with violence if their honor was doubted. An atmosphere of violence and mistrust is not conducive to economic development (Keywood & Baten 2021). This might have been at least partly related to the increase in slave-trading activities, although this cannot be assessed quantitatively yet.

Relationship between Elite Violence and Numeracy

We found that, in general, higher levels of elite violence in some African principalities were associated with a lower or stagnant formation of elite numeracy, similar to what has been found among European elites (Keywood & Baten 2021). In contrast, other African principalities reduced elite violence early-on, resulting in rapid elite numeracy development.

As Figure 1 shows, we found very high elite violence levels in principalities on the territory of today’s Angola in the 17th century and very low corresponding estimates of elite numeracy. Meanwhile, we found quite the opposite for principalities in the southern part of Africa in the 18th, 19th and 20th centuries, where high numeracy observations coincided with relatively low levels of violence among the elite. The negative relationship between elite violence and elite numeracy was not driven by single outliers. 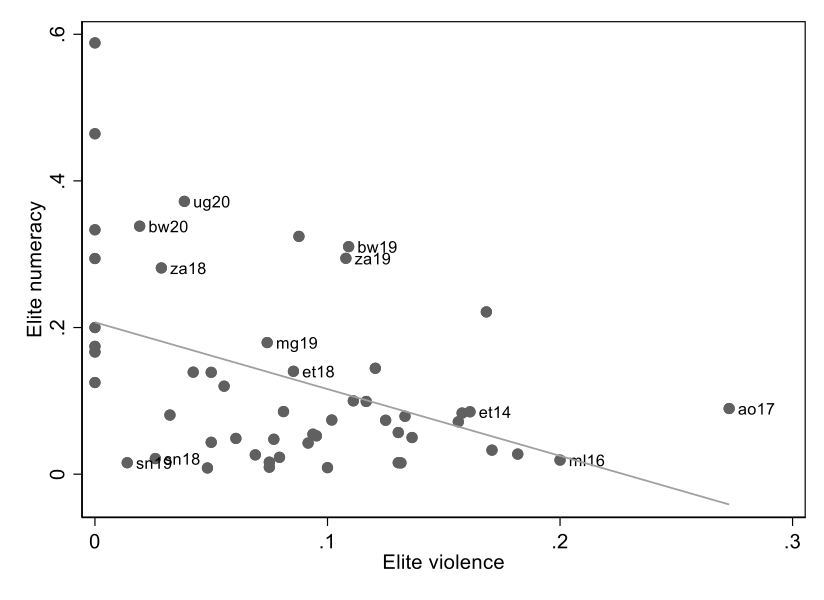 Note: In this Figure, we show the elite violence (based on regicide) and elite numeracy. We included only country-and-century units (before 1500 two-century-units) with at least one birth-year-known case in order to ensure sufficiently high measurement quality. The abbreviations follow the ISO-2 standard combined with the corresponding century, for example, ug20=Uganda in the 20th century, bw=Botswana, za=South Africa, mg=Madagascar, et=Ethiopia, sn=Senegal, ml=Mali, ao=Angola, for the full list see Table 2. On the aggregation by modern country, see Appendix L.

Comparison of Africa and Europe

Trends in elite numeracy can also be used in intercontinental comparisons. We were curious about how the most successful African principality of the early modern period, Imperial Abyssinia, compared with the least successful regions of Europe of the same period (Figure 2). We found that the East African “success case” of Abyssinia was above Eastern European levels of elite numeracy in the 16th century, but Eastern Europe eventually overtook Abyssinia during the 18th century. In contrast, Northwestern Europe (the United Kingdom, the Netherlands and Belgium) remained consistently far ahead of both regions, which Keywood & Baten (2021) found to be the result of relatively low levels of elite violence.

Could the difference between Europe and Africa be related to elite violence? This reasoning is supported tentatively in Figure 3, as violence in Africa might have increased until the 17th century and only then began to decline, while Europe had a continuous decline in elite violence after the 14th century. However, we recognize that the large error bars indicate that this is not statistically significant. 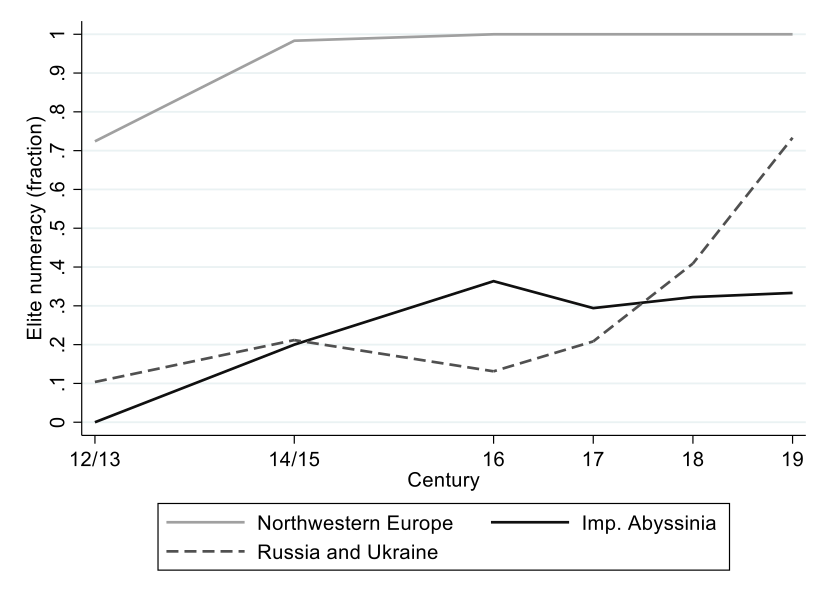 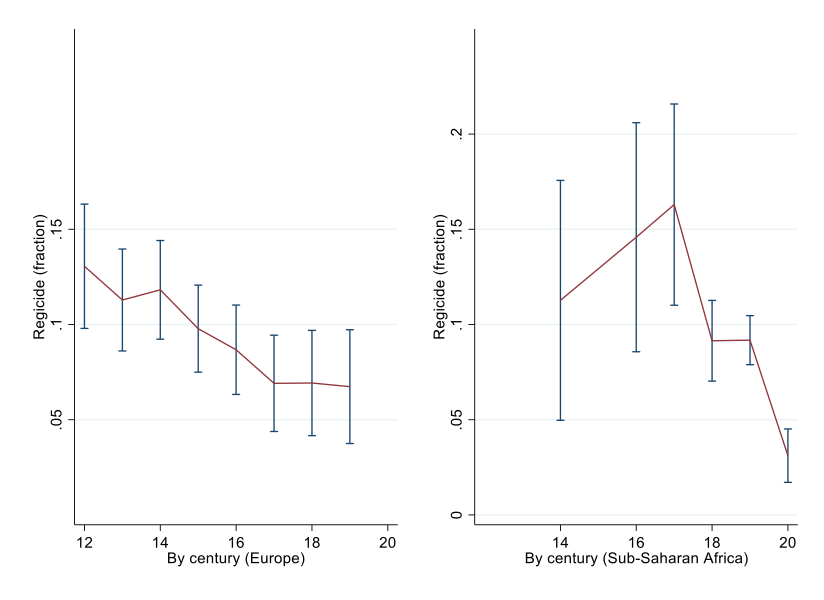 Note: Source: see notes for Figure 10 in Baten and Alexopolou (2021). We included only country-and-century units (before 1500 two-century-units) with at least one birth-year-known case for Africa in order to ensure sufficiently high measurement quality.

Kleoniki Alexopoulou is a postdoctoral researcher in economic history at Universidade Nova de Lisboa. Her research focuses on the role of fiscal and labour regimes in state and social transformations in Portuguese Africa during the colonial era (1850s-1970s).  Read more