Skip to content
Home › Colonial Legacies, Ethnicity and Fertility Decline in Kenya: What has Financial Inclusion got to do with it?

Colonial Legacies, Ethnicity and Fertility Decline in Kenya: What has Financial Inclusion got to do with it?

How should we understand the relationship between the concurrent decline in fertility in Kenya and the spread of financial inclusion in the 2000s? We argue that this relationship may be rooted in the legacies of colonialism and regional and ethnic differences.

Kenya experienced a steep decline in fertility from the late 1970s until the mid-1990s. Fertility reduction then stalled in the mid-1990s coinciding with a reduction in support for family planning programmes, but resumed with vigor in the early 2000s at the same time as M-PESA (mobile phone-based payment transfers) and other financial innovations were spreading rapidly in Kenya (Figure 1). Nevertheless, Kenya’s total fertility rate remains high in relative terms (3.42 as of 2019). There are reasons to think that these two trends are related, given the often-asserted strong association between financial inclusion, poverty reduction and women’s empowerment (Demirgüc-Kunt, et al. 2017, Brody et al. 2015). 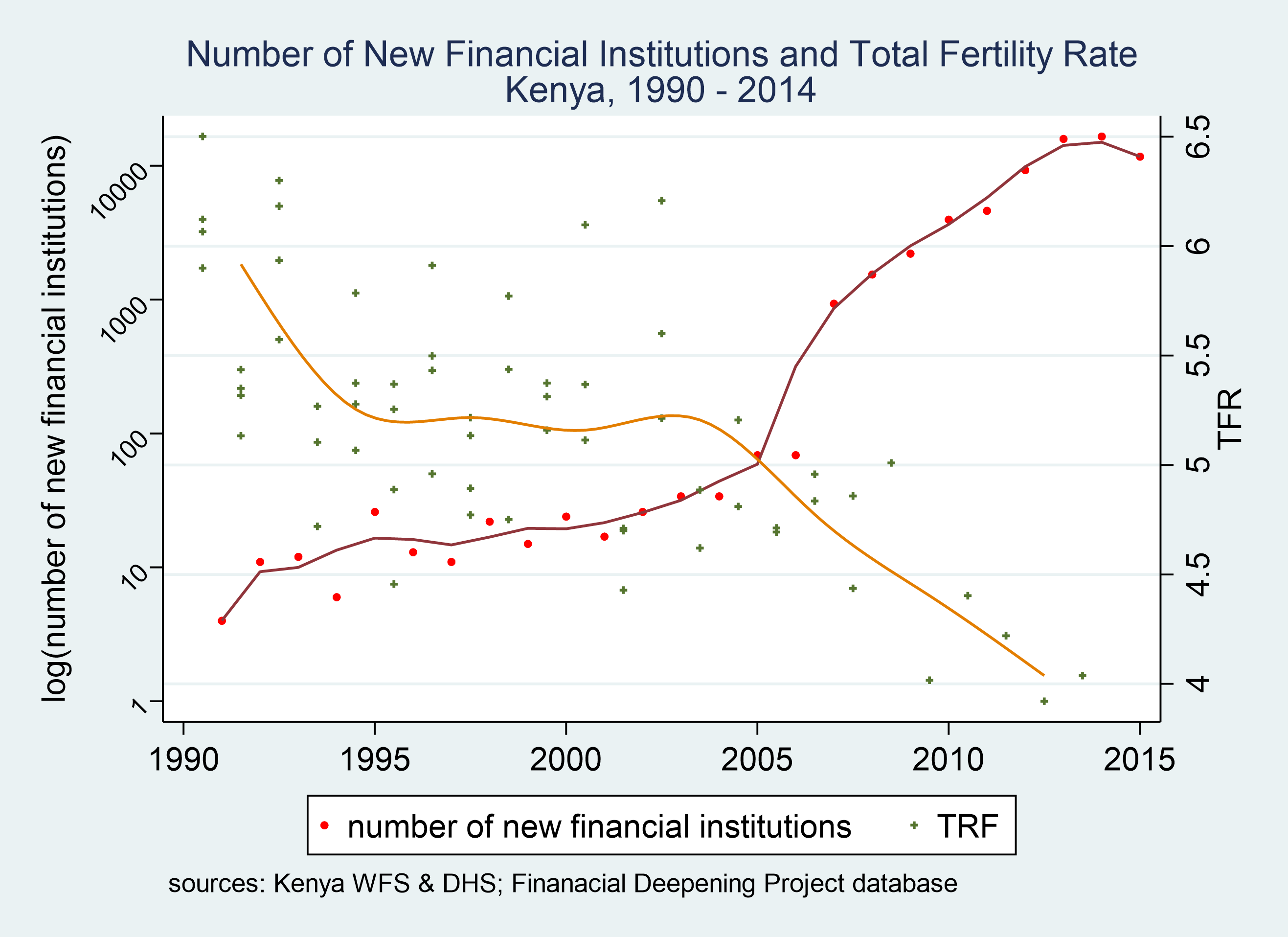 However, a causal link between financial inclusion and fertility decline is not so easily established (Duvendack & Palmer-Jones 2017). We eschew the application of econometric tools of the ‘credibility revolution’ in economics to establish causality (Sveriges Bank 2021), as this approach is unlikely to be convincing in this case Deaton 2010). Instead, in our recent article (Duvendack & Palmer-Jones 2022), we draw on the more pragmatic concept of explication, where many factors can play roles in the outcomes observed contingent on the specific contexts (Mackie, 1965).

Explaining these patterns requires us to think about the different fertility trends within Kenya’s numerous ethnic communities. Fertility decline started earlier and proceeded more rapidly among the Kikuyu, followed later by other Bantu (Eastern before Western) and to a lesser extent among Nilotic and Cushitic groups (Figure 2). Fertility decline among the Bantu seems to have stalled in the early 1990s before resuming, especially among the ‘other Bantu’, in the early 2000s, and continued throughout among the Nilotic. 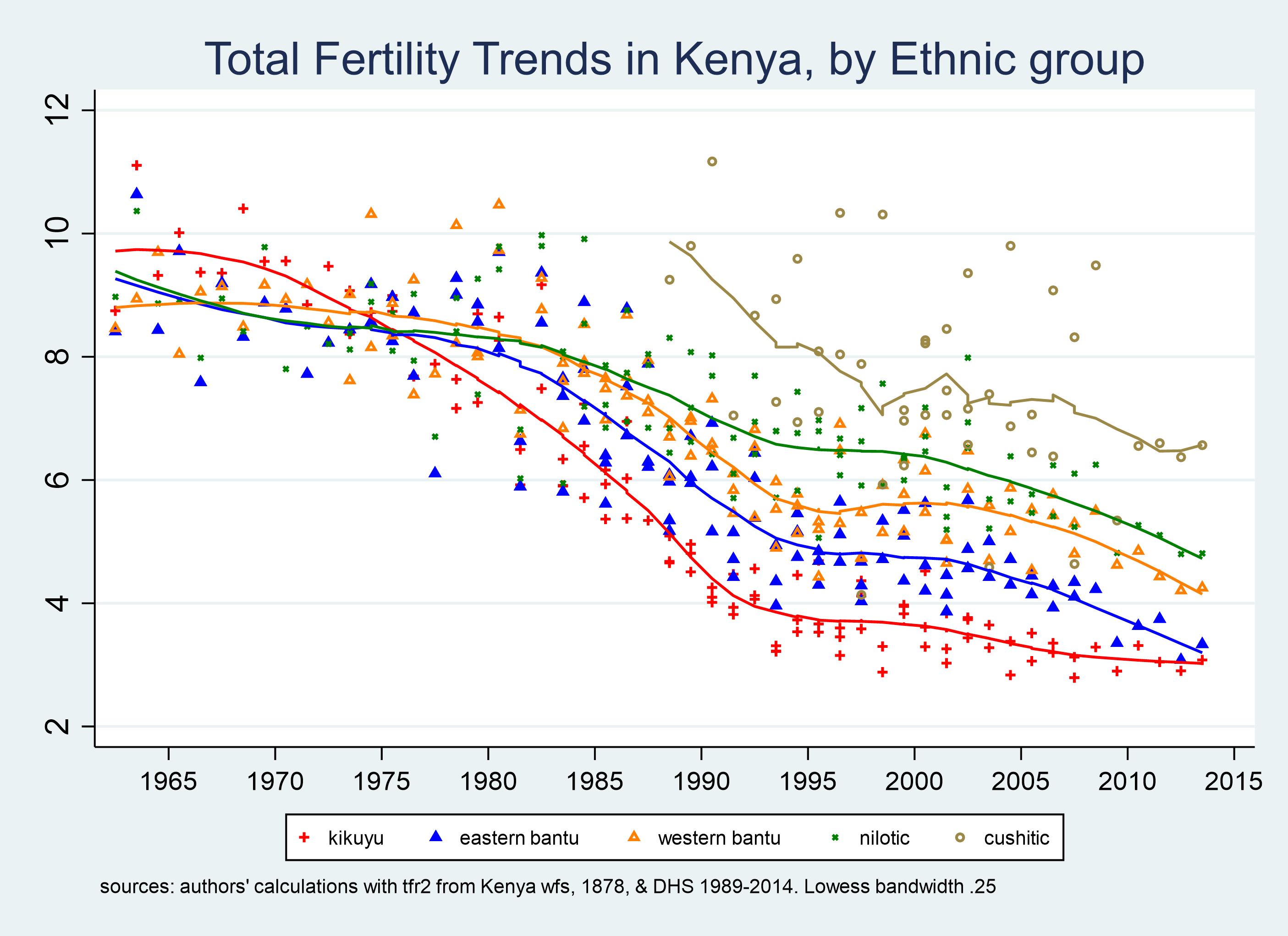 Ethnic politics could explain these patterns. Politically dominant ethnic groups may enjoy privileges that could impact on fertility, such as favorable access to state family planning resources (Weinreb 2001). The earlier and steeper decline in fertility among the Kikuyu coincided with the presidency of Jomo Kenyatta (a Kikuyu, and head of state 1963-1978) and the first years of the presidency of Daniel Arap Moi (1978-2002), who although Nilotic (Kalenjin), inherited strong Kikuyu support (Figure 3). During the later years of Moi’s presidency, the Kikuyu lost their privileged status, and thus access to state resources, and their fertility reduction stalled. The dominance of the Kikuyu returned under the presidency of Mwai Kibaki (2002-2013, a Kikuyu) and fertility decline resumed. 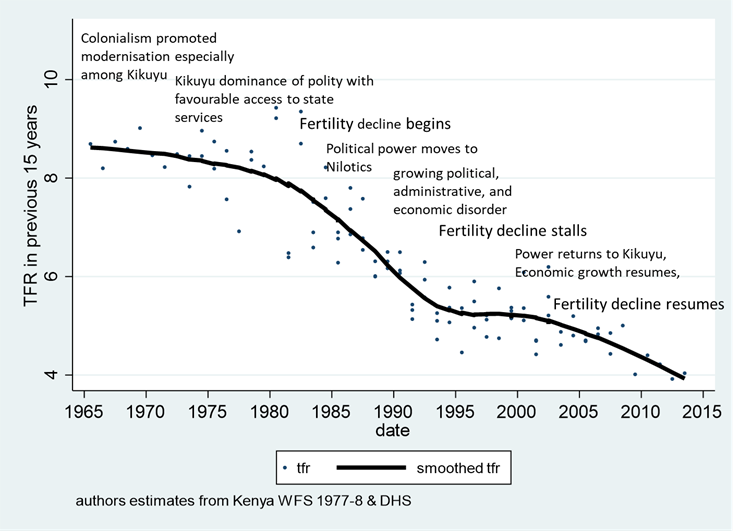 However, the family planning and ethnic privilege stories beg the question why fertility decline seems to have started among Kikuyu, and then spread to eastern and then western Bantu groups. Colonial investments, settlements and policies brought about economic and social dynamics which could affect fertility, such as urbanization, education, employment and wealth. These dynamics were themselves affected by geographical features, including the potential for commercial crop farming, which influenced the location of the railway linking the port of Mombasa with the interior in the early 1900s and thus strongly shaped Kenya’s economic geography (Jedwab et al, 2017).

Ethnic groups residing near colonial infrastructure had better access to employment and educational opportunities which shaped their economic development, fertility preferences and behavior. The Kikuyu were located nearer, and were thus more impacted by colonial settlements, than other ethnic groups. They experienced greater disruption and dislocation due to colonial land appropriation, but also had more access to business, education and employment opportunities, which may explain their comparatively lower fertility rates. Among the other Bantu, the eastern Bantu were affected more and earlier than the western Bantu and Nilotic people, following the spatial and temporal patterns of colonial impacts.

Early stages of financial inclusion (up to 2000s) occurred in proximity to and spread from these transport and urban locations established in the colonial era. Indicators associated with these locations such as urbanization, education, employment, and wealth play significant roles in explaining both fertility trends and financial inclusion, but are themselves historical legacies of colonialism, geographical contexts, and ethnic belongings. Thus, it would be premature, and a-historical, to argue that financial inclusion, family planning, or any of the other development intervention “caused” these patterns of fertility decline.

Duvendack, M., Palmer-Jones, R. (2022). “Colonial Legacies, Ethnicity and Fertility Decline in Kenya: What has Financial Inclusion Got to Do with It?” European Journal of Development Research.

Weinreb, A. A. (2001). “First politics, then culture: Accounting for ethnic differences in demographic behavior in Kenya.” Population and Development Review 27(3):437-467.

Maren Duvendack is a Professor of Evaluation in Economics in the School of International Development at the University of East Anglia. Her research focuses on impact evaluation and systematic review methods, digital financial inclusion, women’s empowerment and reproductive health in South Asia and East Africa.  Read more

Richard Palmer-Jones is a former Reader in the School of International Development at the University of East Anglia and currently works on the impacts of large dams, and the practices and research ethics of applied micro-economics in development.  Read more