Skip to content
Home › Washington Consensus Reforms and Economic Performance in Sub-Saharan Africa: Lessons from the Past Four Decades

Washington Consensus Reforms and Economic Performance in Sub-Saharan Africa: Lessons from the Past Four Decades

Over three decades after market-oriented structural reforms, termed "Washington consensus" policies, were first implemented, we revisit the evidence on the effects of these policies in sub-Saharan African countries. Following initial declines in per capita economic growth over the 1980s and 1990s, reform adopters experienced notable increases in per capita real GDP growth in the post 2000 period, but we also find that the ability to implement pro-poor policies alongside market-oriented reforms played a central role in successful policy performance.

Economist John Williamson coined the term “Washington Consensus” in 1989, in reference to a set of 10 market-oriented policies that were popular among Washington-based policy institutions, as policy prescriptions for improving economic performance in Latin-American countries. These policies centered around fiscal discipline, market-oriented domestic reforms, and openness to trade and investment. In African countries, the Washington Consensus inspired market-based reforms prescribed by international financial institutions (IFIs) like the World Bank and the International Monetary Fund (IMF), under “structural adjustment programs” (SAP), often as prerequisites for financial assistance.

The socio-economic effect of these policies remains widely debated to this day. Most early literature found that they failed to improve socio-economic conditions in African countries for several reasons due to, among others, the failure to account for political economy within countries, and the politics of conditionality and reforms that did not adequately emphasize the role of local ownership in domestic economic policy (Mkandawire & Soludo 1999, Sender 1999). Over three decades after the initial reforms, in a recent paper published in the Journal of Economic Perspectives (Archibong, Coulibaly & Okonjo-Iweala 2021), we revisit the evidence of the links between the adoption of these Washington Consensus policies and economic performance in sub-Saharan Africa.

We find that following initial declines in per capita economic growth over the 1980s and 1990s, the countries that adopted the reforms experienced notable increases in per capita real GDP growth in the post-2000 period. We complement the aggregate analysis with four country case studies that highlight important lessons for effective reform. Notably, the ability to implement pro-poor policies alongside market-oriented reforms played a central role in successful policy performance. The findings of this paper could offer a useful guide to policymakers as they ramp up the structural reform agendas to build back better post-COVID economies.

Why did African countries adopt Washington consensus policies in the 1980s and 1990s?

Some of the key policy reforms of the Washington consensus/SAP period of the 1980s and 1990s included privatization, fiscal discipline and trade openness, that were introduced by IFIs as conditions for debt relief to African countries. In the 1960s and 1970s, newly independent African government, struggling to recover from the ravages of European colonialism, spearheaded increased fiscal spending aimed at economic development. Governments borrowed significantly to finance development spending over time. Significant, sudden reductions in the price of oil in the 1980s led to declines in export revenue for many governments. This decline in export revenue, along with a collapse in world prices of primary agricultural commodities, which made up 88% of Africa’s exports, resulted in a shortfall in revenue that put enormous pressure on governments’ finances. The global recession in the early 1980s, along with an increase in interest rates in donor countries, also raised interest payments on previously contracted loans, markedly increasing the debt burdens of African countries and leading to the debt crisis of the 1980s.

By the early 1980s, African governments were in severe financial straits, and with lowered incomes, increasing poverty, and declining welfare, turned to IFIs for debt relief. It was under these conditions that African counties first adopted reform policies, stipulated again, as conditions for debt relief by IFIs, to achieve macroeconomic stability and efficient. The expectation was that market-oriented reforms would correct domestic policy-induced distortions in prices, such as overvalued exchange rates, subsidies that led to artificially low agricultural commodity prices, high wage rates, low interest rates and subsidized agricultural input prices which introduced inefficiencies in resource allocation, worsening shortages and reducing economic output. The underlying assumption then, was that by introducing market-oriented policies- like reducing public spending by removing agricultural subsidies and tariffs, privatizing publicly owned firms and removing or relaxing exchange rate controls- competitive markets would work to efficiently allocate resources to people in African countries suffering under the burden of debt and illiberal fiscal and monetary policies.

Several African countries adopted these policies, often under conditionality, in the 1980s and 1990s. Most early literature finds that the policies failed to improve economic conditions in these countries as the politics of IFI conditionality worked to undermine the role of local ownership in shaping domestic economic policy. Also, reductions in government spending often reduced spending on pro-poor programs, and the removal of agricultural subsidies made it difficult for African farmers to compete on international markets. The results were increased unemployment and socio-political unrest in several African countries over this period.

How did reform adopters perform in the 2000s?

With the benefit of more recent data, we revisit whether market-oriented reforms of the 1980s and 1990s, notably privatization, fiscal discipline, and trade openness. Between 2000 and 2019, African economies experienced remarkable improvements in economic growth, with median country real GDP per capita growth rising from 0.2 percent per year on average in the 1980s and 1990s, when many of the reforms were first implemented, to 1.6 percent over 2000 to 2019 as shown in Figure 1. Inflation rates in the region have also declined from double digits in the 1980s and 1990s to stabilize at around 5 percent in the past two decades. 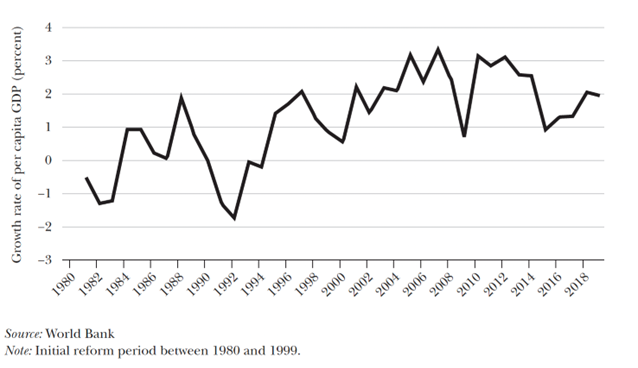 Comparing the reform countries to non-reform countries, we find that during the initial reform years, economic performance was worse for reformers, with average per capita real GDP growth declining in the 1980s and 1990s. In contrast, non-reform adopters experienced positive growth over this period, consistent with the earlier literature showing that the reforms failed to bring about short-run economic growth. Between 2000 and 2019, average per capita GDP was higher than during the 1980s and 1990s for both reformers and non-reformers. However, the increase in growth was even higher for reform adopters as shown in Table 1. When we examine these comparative statistics by reform category, the difference in performance between reformers and non-reformers is largely driven by the adoption of fiscal discipline and domestic market-oriented reforms. While it is difficult to draw definitive conclusions, the results point to a reversal of the economic fortunes of reform adopters in the last two decades, following their initial dismal economic performance during the 1980s and 1990s. 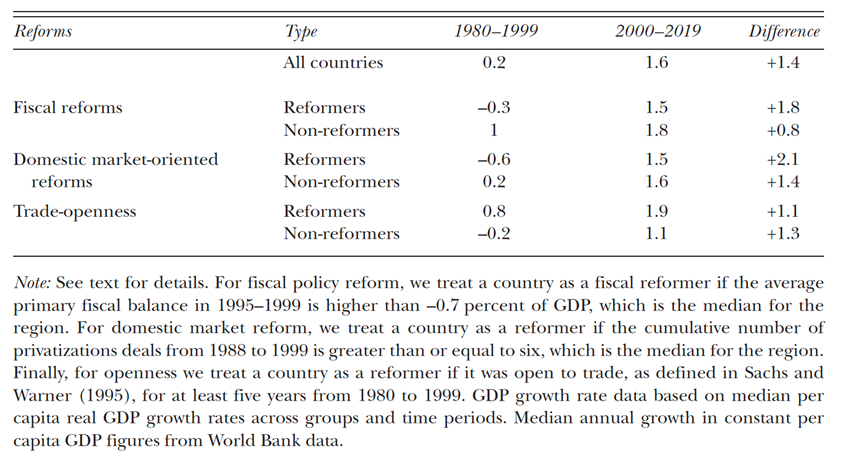 To enrich the aggregate analysis, we conduct four case studies for Ethiopia, Nigeria, Uganda, and Senegal, which allow for a more granular and nuanced assessment of the effect of the reforms. Overall, the case studies support the aggregate findings and reveal some useful lessons on the correlates of successful reform implementation. A stable government and socio-political environment with a focus on pro-poor policies was an essential ingredient in implementing successful reforms. Crucially, concurrent efforts to minimize the potential negative welfare impacts of macroeconomic reforms on domestic populations are important to increase needed public support for reforms.

Archibong, B., Coulibaly, B. and Okonjo-Iweala, N., 2021. Washington consensus reforms and lessons for economic performance in Sub-Saharan Africa. Journal of Economic Perspectives, 35(3), pp.133-56.

Belinda Archibong is an Assistant Professor of Economics at Barnard College, Columbia University. Her research investigates the role of historical institutions and environment in inequality of access to public services and the development of human capital in African nations.  Read more

Brahima Coulibaly is vice president and director of the Global Economy and Development program at Brookings and the Edward M. Bernstein Scholar.  Read more

Ngozi Okonjo-Iweala is the Director-General of the WTO.  Dr. Okonjo-Iweala is an economist and global finance expert, who has previously served as the Managing Director of Operations at the World Bank and as Minister of Finance for Nigeria.  Read more