Historical data from Kenya show that when an ethnic group gains power, public servants of that group may be emboldened to misbehave.

The efficient provision of public goods relies on a well-functioning bureaucracy. But in many developing countries, the public sector suffers from absenteeism and poor performance (Banerjee and Duflo 2006). Our research argues that political shocks may contribute to public sector inefficiency. In particular, ethnic politics and changes in the political dominance of ethnic groups appear to affect the performance of Kenyan policemen.

Historical records shed light on the personnel economics of the state

Recognizing the importance of the public sector, ‘personnel economics of the state’ has become one of the most active areas for research in development economics (Finan et al. 2017). But research on this topic is usually constrained by the lack of access to detailed personnel data, especially for public servants at the bottom of the hierarchy. This problem is particularly severe for parts of the state’s administration that are ‘sensitive’, like the police, even though they provide essential public goods. In a recent article, we overcome these challenges by relying on extremely rich and unique historical data on the performance of 6,784 police officers in Kenya between 1957 and 1970. The Kenya Police Service Registers allow us to track Kenyan police officers over their entire career. The conduct register sheet, shown in Figure 1, informed us about offences committed by each police officer, including incidences of absenteeism, untidiness, drunkenness, disobedience, and (in rare cases) violence. 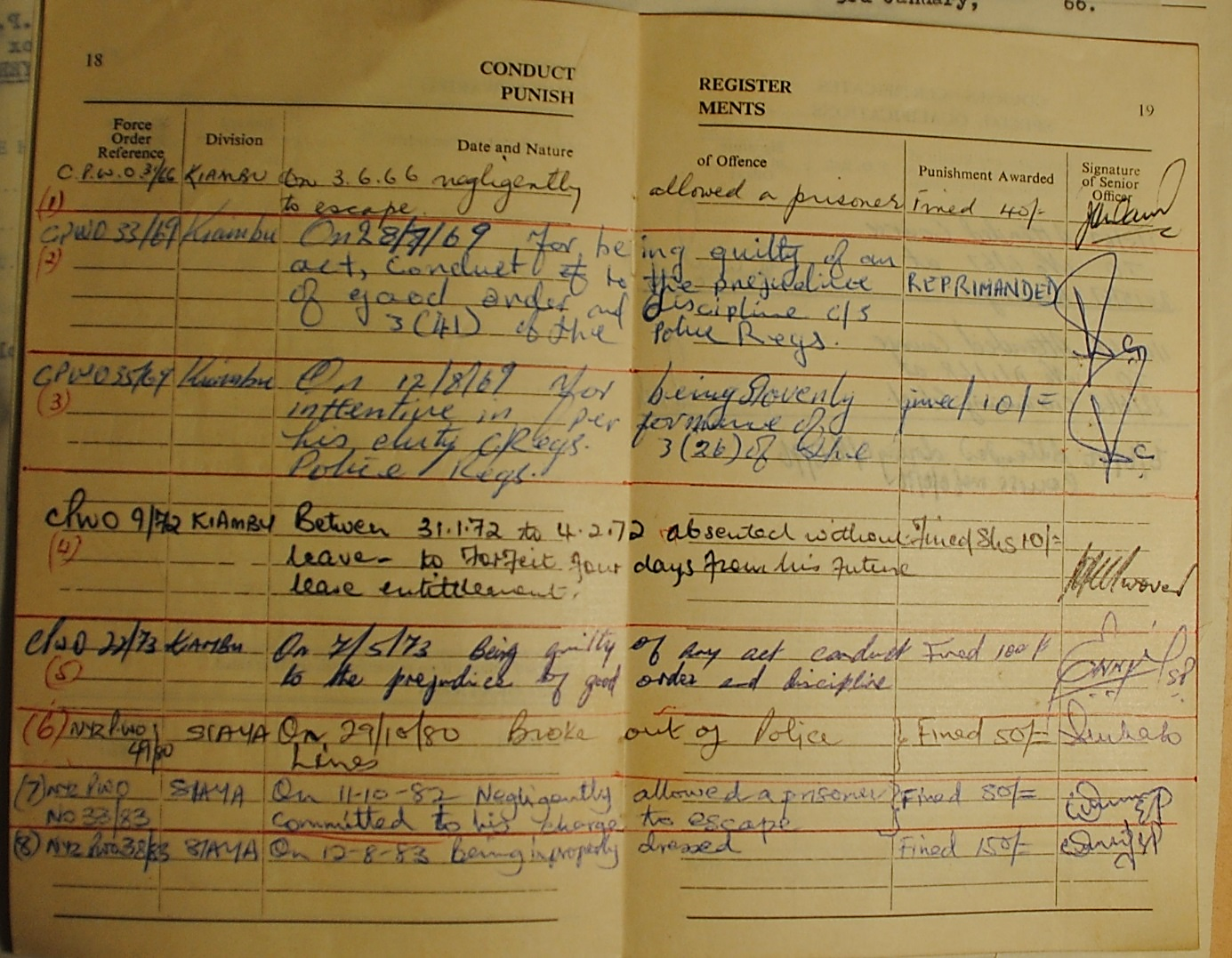 The rise of ethnic politics impacted the behavior of Kenyan policemen

We study the period 1957-1970 to investigate how the rise of ethnic politics affected the performance of policemen. Ever since the first multi-party elections in 1961, ethnic politics has featured prominently in Kenya. In Figure 2, we show that the 1961 elections were quickly succeeded by changing patterns in discipline – police officers from ethnic groups that were part of the dominant Kenya African National Union (KANU) party started to behave significantly worse. An offense probability of 0.2 can be read as “one out of five” police officers was found guilty of an offence in that year. We see this pattern confirmed whenever an ethnic group gains or loses power through the KANU coalition. 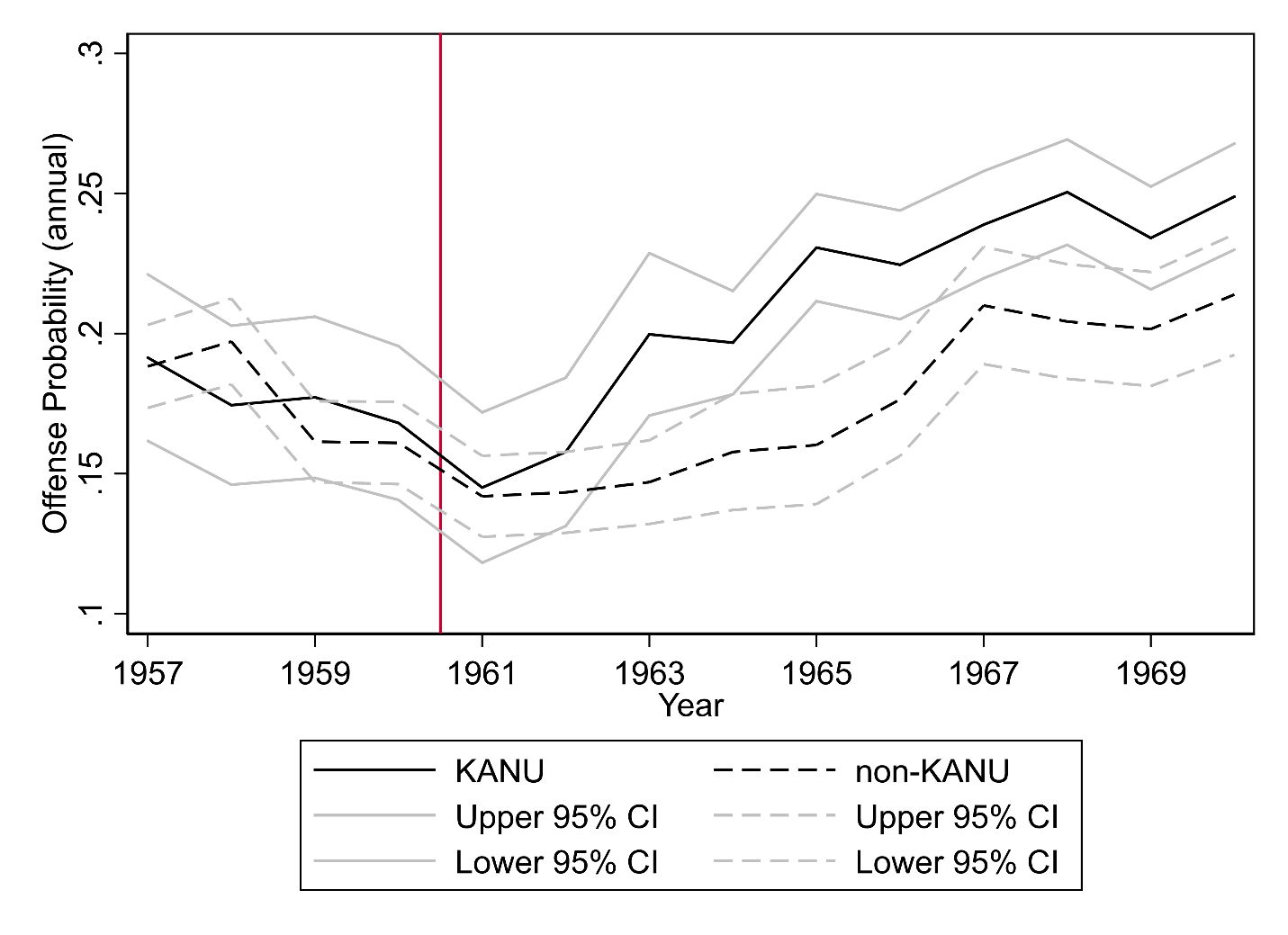 Notes: This figure plots the offense rate of police officers in a given year, split by whether the ethnic group of the police officer was affiliated with the Kenya African National Union (KANU). That is the Gema (Kikuyu, Embu, Meru) alliance throughout, the Luo until 1965, and the Kamatusa (Kalenjin, Maasai, Turkana and Samburu) after 1964. The year 1961 marks Kenya’s first multiparty election.

Evidence of an ‘emboldenment’ effect

How do we explain the worsening behavior of KANU policemen?  We argue that our results are consistent with the idea that ethnic politics created a general sense of being empowered, which emboldened the policemen of the ruling ethnic groups. This interpretation is supported by historical sources that describe the importance of political shocks on the self-image of ethnic groups.

Kenya’s independence period is in many ways a unique setting for studying the relationship between identities, political shocks, and public sector performance. But, it is interesting to observe that the rise of ethnic politics in Kenya not only quickly made ethnic identities salient in the public service, but did so in such a way that policemen changed their attitudes and day-to-day behavior. These historical findings suggest that street-level public servants are not insulated from high-level political shocks.

A representative bureaucracy may not be the answer

What are the policy implications? Many African countries aim to rebuild and form the public service into a ‘representative bureaucracy’. In practice, this invariably means in proportion to population shares of ethnicities. François et al. (2015) document such proportionality at higher levels of government more generally in Africa. But, in the context of our study, it is not the uneven representation of different ethnic groups in the police force that drives underperformance; it is behavioral effects triggered by political dominance. According to our evidence, these effects may be long-lasting. Countering these impacts is challenging. It is less straightforward to design policies that address an emboldenment effect than policies that curb favoritism. Still, our findings could justify closer monitoring of groups that are prone to emboldenment effects. Information campaigns could possibly counterbalance images of ethnic superiority. And, at the most fundamental level, our results provide an argument in favor of institutional reforms that make the political system more inclusive.

Banerjee, A., R. Chattopadhyay, E. Duflo, D. Keniston and N. Singh (2012), “Can institutions be reformed from within? Evidence from a randomized experiment with the Rajasthan Police”, Mimeo.

Sanchez de la Sierra, R. and K. Titecay (2016), “The state as organised crime: Industrial organisation of the police in the Democratic Republic of the Congo”, Mimeo.

Oliver Vanden Eynde is Associate Professor at the Paris School of Economics. His research focuses on civil conflict, crime, economic development, and the role of the military and police in developing countries.  Read more

Patrick M. Kuhn is Assistant Professor of Comparative Politics in the School of Government and International Affairs (SGIA) at Durham University. His research focuses on the relationship between democratic institutions, economic development, and political violence.  Read more

Alexander Moradi is an economist and economic historian at the Free University of Bozen-Bolzano (Italy). His research is primarily focused on topics related to African economic development over the long run.  Read more