Skip to content
Home › The Territorial Expansion of the Colonial State: Evidence from German East Africa 1890–1909

The Territorial Expansion of the Colonial State: Evidence from German East Africa 1890–1909

This article investigates the processes of state penetration in the former colony of German East Africa (1890-1909). Contrary to previous studies – which largely emphasize factors like disease environments, extractive potential or pre-colonial political centralization – we find that geographical patterns of state penetration have been driven by the state’s strategic imperative to solidify control over territory and establish political stability.

Why do states establish formal institutional presence in certain locations rather than others? While classic works of comparative politics and historical sociology have touched on the connection between the spatial unevenness of the state and the temporal patterns of its extension (e.g., Boone 2003; Herbst 2000), little research has systematically explored the determinants of states’ sub-national territorial expansion.

This paper aims to fill this gap by studying patterns of state expansion in colonial German East Africa. Rather than analyzing the development of national capabilities, we focus on the “sub-national expansion of the state” as it applies to the spread of state institutions of control through the national territory.

State-building involves a diverse range of functions, from early attempts to establish a rudimentary infrastructure of control and coercion to the penetration of society with a complex web of differentiated state institutions. We investigate an initial and basic phase of state-building that focuses on establishing state presence and control. In this phase, state elites have limited ambitions beyond territorial domination, since they are often constrained by a disjuncture between their national capabilities and the size of the territory they aim to control (Herbst 2000). These conditions characterize a transition phase, when states have claimed authority over a specific region – including in a colonized territory – but have not (yet) initiated a more comprehensive state-building project.

Departing from the previous literature on institution-building, we argue that in this specific phase political stability and territorial control – rather than factors like resource endowments, disease environments or pre-colonial political structures – are the prime factors guiding a state’s allocation of scarce resources throughout its territory. Therefore, states prioritize areas that have previously experienced violent resistance against the state, as well as those that promise to maximize territorial coverage and minimize “blank spots” of state absence.

We investigate these arguments with a detailed analysis of colonial state-building in former German East Africa. The German Empire, a latecomer to the colonial game, only sought oversees possessions in the New Imperialism stage of colonialism. This period was characterized by European nations’ virtually insatiable hunger for territorial acquisitions overseas, as the result of a highly nationalistic environment, demanding that nations solidify their international standing both internationally and domestically. As such, Germany’s colonial endeavor in Africa, like other imperial powers at the time, was motivated less by resource extraction and more by a desire for prestige and competition with other European (Pesek 2005), which led to a very specific scope of objectives in the colony, contrasting with other phases of European colonialism. While unique in some ways, e.g., in terms of the short duration of German control, analyzing German colonial rule in German East Africa can shed light on the rudimentary processes of state penetration in the early phases of state-building.

We conduct an in-depth analysis of state-building efforts by the German colonial administration in the territories of former German East Africa (which comprised today’s mainland Tanzania, Rwanda, and Burundi) to test our arguments. Information on state presence and the colony’s socio-economic characteristics was culled from extensive historical records found in German colonial yearbooks and maps. We digitized and geocoded this information to create a detailed spatial-temporal record of German colonial state-building efforts. Figure 1 displays the 50×50 km grid-cell location of German military stations towards the beginning of the colonial project in 1890 and shortly before the outbreak of World War I. Military stations formed the coercive and administrative backbone of the German colonial state. A comparison of both maps demonstrates how the colonial state penetrated its colony’s hinterland starting from its initial main administrative centers along the coast. 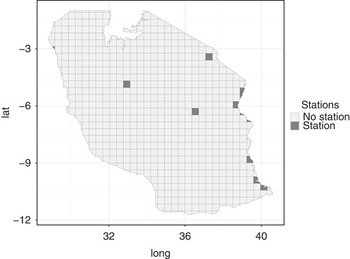 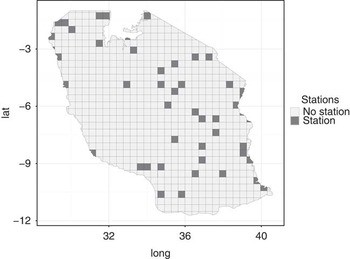 Systematic quantitative analyses of this temporal development yield consistent empirical evidence that violent challenges to colonial rule were a prime determinant of the geographic expansion of state presence: the colonial state was particularly likely to establish its new stations in areas that had previously seen violent encounters between colonial forces and the local population. Second, the desire to establish comprehensive territorial control motivated colonial administrators to commit scarce state resources to remote and inaccessible areas of the colony. In particular, the colonial state established new stations in areas that minimized the distance from any location in the territory to the nearest administrative and military center, which lowered costs while increasing territorial control.

Figure 2 displays the predicted probability of a German station being located in a specific grid-cell year as a function of previous violent encounters in that grid-cell (battle index) as well as the territorial control value of the respective cell. An increase in violent events increases the likelihood of receiving a new military station in the following year and, given the spatial configuration of existing stations, locations with a higher territorial control value (i.e, potential locations that would reduce travel distances) are also more likely to receive a new military station.

Figure 2: Predicted probability of a station in grid cell 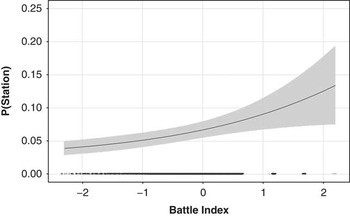 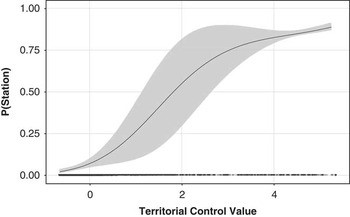 Our analyses also reveal that the potential for economic extraction (e.g. Frankema et al. 2018) or cost-driving geographic or ecological features, like the disease environment, mattered much less than is often emphasized. We do find some evidence that prior political centralization of ethnic groups and the presence of colonial road infrastructure are predictive of station creation. Substantively, the driving rationale of the German colonial administration in East Africa was the establishment of political stability and territorial control. In effect, this led to a prioritization of state-building in both areas with previous violent resistance against colonial rule and areas that promised maximum territorial coverage, overriding concerns about unfavorable disease environments, remoteness, or the lack of opportunities for economic extraction.

Jan Pierskalla is an Assistant Professor of Political Science at the Ohio State University. He is interested in the political economy of development, conflict, and state-building.  Read more

Alexander De Juan is a Senior Research Fellow at the GIGA German Institute of Global and Area Studies. His research focuses on state-building, development, and violent conflict.  Read more

Max Montgomery is a PhD student at the GIGA German Institute of Global and Area Studies. He works on the long-term legacy effects of colonial missionaries.  Read more