The Origins of Colonial Investments in Former British and French Africa

What led colonial states to invest much more in some districts than others? This study shows that natural harbors and capes led some places to become centers of pre-colonial trade. These areas, in turn, attracted the lion’s share of colonial public investments not only in infrastructure but also in health and education. Public investments were considerably lower in places further away from the centers of pre-colonial trade.

Research examining the origins and impact of colonial investments on African economic development is scarce, especially if we exclude the growing literature on the long-term educational, economic, and political effects of missionaries. This is in contrast to studies “investigating the impact of colonial institutions, which have proliferated in recent decades”, as Bolt and Gardner mentioned in their recent AEHN blog post. That scarcity is unfortunate because public investments reveal a state’s preference for resource allocation.

The study of investments seems particularly important whenever formal institutions (rules) are ill-defined, or well-defined but weakly enforced and thus reveal little about a state’s preferences. For example, formal institutions were rather weak and differed little within the colonies of French West Africa. In spite of this, levels of public investment differed greatly both between colonies and within the districts of each colony. Huillery’s (2009) work on the former colonies of French West Africa was groundbreaking because it showed that colonial investments in infrastructure, education, and health are very good predictors, respectively, of contemporary infrastructure, education, and health outcomes.

In a recently published article (Ricart-Huguet, 2021), of which a free read-only version of  is available here, I combine Huillery’s data with original district-level data from British records from the Colonial Office (the Blue Books) to show that a similar logic applies to former British Africa. I find that districts with higher public investments (financed largely by taxes that the British and the French imposed on Africans) are more educated and richer today both in French West Africa and in British East and West Africa. Put differently: regional inequalities within colonies in the early 1900s persist a century later.

The origins of unequal colonial investments

Given the long-lasting impacts of unequal colonial investments, it is worth asking: Why did European administrators invest much more in some districts than others? That question loomed large as I plotted out the extent of within-colony inequality in public investments in 16 East and West African colonies. Figure 1 illustrates high degrees of investment inequality between districts within two colonies (Cote d’Ivoire and Nigeria), which persists even when adjusted for district-level population differences.

Putative explanations for uneven colonial development advanced by historians and political economists include the presence of natural resources, the introduction of cash crops, and some pre-colonial characteristics, such as the degree of pre-colonial political development. However, the main event that rocked sub-Saharan Africa starting in the 1500s was increased trade between Africans and Europeans, primarily in slaves (Nunn & Wantchekon, 2011) and secondarily in commodities such as gold, ivory, copper, and palm oil. We know that the colonial districts of Lagunes (to which Abidjan belonged) and Lagos were and remain more developed than most of Cote d’Ivoire and Nigeria, respectively. But is it because they were centers of pre-colonial trade?

Correlation is not causation, so I conceived of an instrumental variable that would allow me to test whether colonial investments across districts can be explained by the presence of pre-colonial trade. An instrument could be a geographic feature that was not important prior to the onset of pre-colonial trade but relevant thereafter. West African coastal geography was not important prior to the 1500s. West African empires did not have any long-distance navigation technology; rather, they were facing inland and traded among themselves and with North Africa. African coastal geography became especially important during the Age of Sail (1500s-1800s), when navigation technology depended more on environmental factors and wind patterns compared to the Age of Steam (1800s-). Hence, the few natural harbors and capes that existed were valuable to European traders to dock their ships, especially between the 1500s and the early 1800s (Figure 6). These were fewer compared to South Asia, where Jha (2013) and Gaikwad (2014) first used natural harbors as an instrument to show that pre-colonial trade had a long-lasting positive influence on interethnic tolerance and economic development in those trading ports. 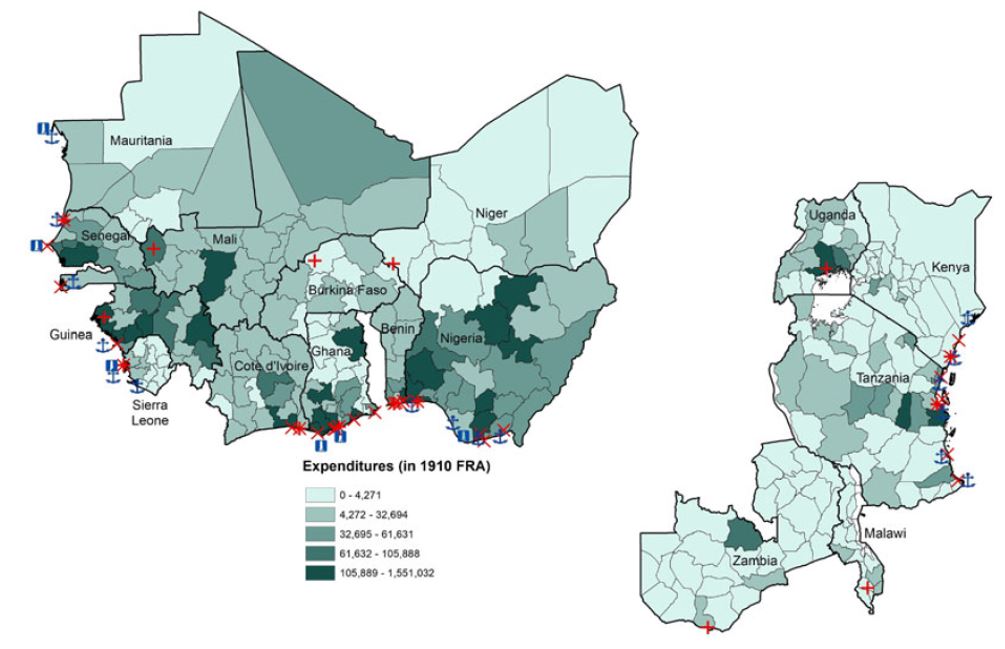 Note: Emblems for natural harbors and capes have been slightly displaced in the map to facilitate visibility. Sources: see the online appendix of (Ricart-Huguet, 2021b) for a list.

Figure 2 shows the level of public infrastructure expenditures by district (1910–1939 average), the location of pre-colonial trading posts in coastal colonies (X), the location of the first pre-colonial trading post in each colony (+), and the location of natural harbors (anchors) and capes (lighthouses). In short, most pre-colonial trading centers were located in natural harbors such as Mombasa and capes such as Dakar (or, in the case of inland colonies, rivers such as Bamako). In turn, I show that colonial districts that were centers of pre-colonial trade received the lion’s share not only of infrastructure investments but also of education and health investments—consider the comparatively high degree of investment in places such as Lagos or Calabar illustrated in Figure 1. The public expenditure map also suggests, and the article shows more rigorously, that investments quickly decrease as we move away from the core districts. This is consistent with what we know about East and West African colonial states: the core was very small, while the periphery was very large.

Conclusion and the mechanisms of persistence

My findings provide a historical foundation for what Horowitz (1985) famously called the “ethnic distribution of colonial opportunity”—that is, that some groups benefited more from, or rather were less harmed by, colonialism than others. I recast this “ethnic” distribution of colonial opportunity to underscore its commercial origins, thereby contributing to an economic account of the origins of regional and ethnic inequality in sub-Saharan Africa (Bates, 1974; Robinson, 2014).

Why does colonial-era regional economic inequality persist? In another recently published article (Ricart-Huguet, 2021a), summarized for the LSE at Africa blog, I collect new data on the few thousand post-colonial cabinet ministers for those same 16 former British and French colonies to show that regional political inequality may be a key mechanism of persistence. I find that districts with more colonial education—rather than more colonial investments or development in general—are disproportionately over-represented in post-colonial African cabinets. This is because, I argue, post-colonial ministers are partly a byproduct of civil service recruitment practices among European administrators that focused on levels of literacy. In East and West Africa, as perhaps in other contexts with weak institutions and low accountability, political elites often reproduce rather than reduce regional inequality. Regional political inequality, then, may be an understudied pathway through which colonial legacies impact distributive politics and unequal development in Africa today.

Feature image: ‘A view of Freetown’ (c. 1803), from T.M. Winterbottom, ‘An account of the native Africans in the neighbourhood of Sierra Leone, Volume I’ [FCO Historical Collection DT516 WIN]

Joan Ricart-Huguet is an Assistant Professor at Loyola University Maryland and a Postdoctoral Associate and Lecturer at the Program on Ethics, Politics, & Economics at Yale University. He received his Ph.D. in Politics from Princeton University and an M.A. in Quantitative Methods in the Social Sciences from Columbia University. His…  Read more