Studies investigating the impact of colonial institutions on African economic development have proliferated in recent decades. So far, much of the work has focused on either policies adopted in colonial capitals and the nature of national institutions (Acemoglu & Robinson 2012), or on the persistence of indigenous and pre-colonial institutions (Michalopoulos & Papaioannou 2013). In this paper, we provide new data on the structure and capacity of African local governments, known at the time as “Native Authorities”, in four British colonies: Nigeria, the Gold Coast (now Ghana), Nyasaland (now Malawi), and Kenya. We show that the interaction of colonial officials and African elites created substantial variation within and between colonies in the local colonial institutions ruling much of rural Africa.

The data for Native Authorities are based on a set of district-level surveys commissioned in 1948 for a five-volume report on Native Administration in the British African Territories (Hailey 1951). The surveys asked a standard set of questions about the physical, economic and demographic characteristics of each Native Authority area (of which there were often several in a district) and about the structure of the Native Authority, its finances and its activities. Produced at a time when the British government was pressing for increased decentralization in the colonies, the Hailey surveys provide a rare quantitative and comparative account of these institutions.

We calculate per capita tax revenue for each Native Authority from c. 1948 as a measure of local government capacity. Tax revenue has become an important metric for comparing state capacity in different historical periods and contexts, including colonial Africa (Karaman & Pamuk 2013; Mkandawire 2010; Frankema & van Waijenburg 2014). But local governments have seldom featured in this work (see Gardner 2012 for an exception), despite the increasing level of fiscal decentralization; by the end of the colonial period, local government spending was over 20 per cent of total government spending in some colonies like Nigeria. Such percentage figures understate the importance of local spending to the rural majority, for whom Native Authorities often provided their sole interaction with the colonial government. In Figure 1, we show the substantial spatial variation in tax revenue per capita.

One difficulty in using tax revenue as an indicator of state capacity is that other factors, like sub-national income levels and the structure of the economy, can also influence the amount of revenue governments collect. Through infrastructure investments and expanded export production, colonial period saw the emergence or consolidation of substantial economic inequalities between regions. In the paper, we examine the relationship between these inequalities and Native Authority revenue per capita. While there are no direct measures of per capita income at sub-national level, we include several proxies for market access, finding a strong relationship between local tax revenue and the accessibility of railways, the production of cash crops in the Native Authority area, and the distance to the nearest major city, as shown in Table 1.

Differences in income levels are unlikely to be the whole story. In Africa and other regions, countries with similar levels of per capita income can have very different levels of tax revenue (Dincecco 2015; Teera & Hudson 2004). Studies of local government finances in particular argue that when local governments have more authority, they are often able to collect revenue. We investigate this relationship for Native Authorities using several measures of local government autonomy, including (i) the method of selecting the Chief, (ii) the setting of the estimates, and (ii) the presence of an appeal court. We also propose a reinterpretation of the Murdock jurisdictional hierarchy variable so widely used as a measure of ‘pre-colonial’ state capacity. People have criticized this measure because most of its observations come from the 1920s, well into the colonial period. We interpret it as a measure of the perceptions of early European officials. These perceptions then informed colonial government’s policies about how much autonomy certain African states should have within the structure of the colonial state, with those perceived as more centralized able to retain greater control. Even controlling for market access, our three indicators of autonomy are positive and significantly related to revenue per capita.

There remains the question of how the structure of local institutions influenced colonial tax revenue. A large literature associates taxpayers’ willingness to pay taxes with the types of institutions governing them (Feld & Frey 2002). While our data do not include direct evidence on tax compliance, we can examine the relationship between internal structures and per capita tax revenue. These results show that the presence of both a chief and a council was associated with higher revenue per capita, while federating with other Native Authorities was associated with lower levels of revenue per capita. 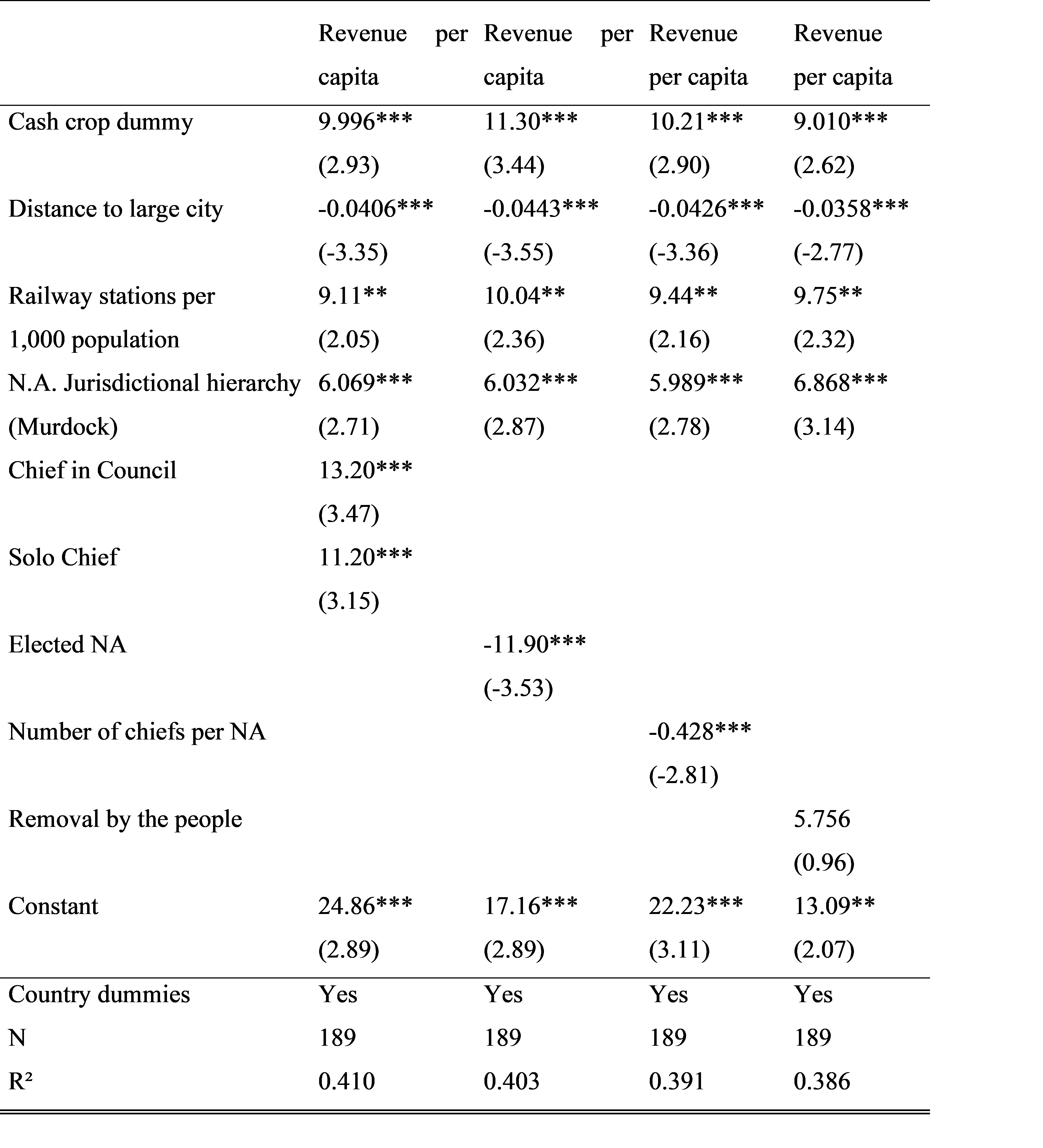 Historian David Killingray (Institute of Commonwealth Studies 2013) once joked that the ideal exam question for a course on African colonialism might be: “During colonial rule, Africa was mainly governed by Africans. Discuss”. Our paper takes a first step toward investigating the truth of that statement. Using newly collected local level data on the capacity and structure of colonial institutions, we are able to show how the variations in the capacity of local governments are linked to different economic and institutional structures of Native Authorities. The collection of local data represents one of the new frontiers of African economic history, and it is our hope that this paper inspires a new approach to the study of colonial institutions which takes into account the dynamic interaction between African elites and European officials.

Institute of Commonwealth Studies (2013). “Indirect Rule – Right or Wrong? A Transcript of the Proceedings of the Seminar Held on 29 March 2012.” Occasional Paper of the OSPA Research Project 6, Lexington, KY.

Jutta Bolt is an Associate Professor at the Department of Economics at Groningen University and Lund University. Her research focusses on understanding long term comparative economic development patterns, with a special focus on Africa.  Read more

Leigh Gardner is an Associate Professor at the Department of Economic History at the London School of Economics. Her research focuses on the economic and financial history of sub-Saharan Africa during the 19th and 20th centuries, with an emphasis on Africa’s global connections. She is also a Research Associate at…  Read more