The arrival of Christian missionaries and the receptivity of African societies to formal education prompted a genuine schooling revolution during the colonial era. The bulk of primary education in the British colonies was provided by mission schools (Frankema 2012), and their historical distribution had a long-run effect on African development (e.g. Nunn 2010). To those with access, formal education under colonial rule provided new venues of political influence and opportunities for social mobility. However, did mission schooling benefit a broad layer of the African population, or did it merely strengthen the power of pre-colonial elites? This paper addresses this question by investigating social mobility of Christian converts in colonial Uganda.

The existing literature has conveyed two opposing arguments, based mainly on qualitative sources. On the one hand, scholars have stressed that British colonial officials discouraged post-primary education of the general African population, fearing that such education would nurture anti-colonial sentiments. As a result, the benefits of mission schooling are purported to have been restricted to sons of traditional chiefs and newly empowered elites, who aligned themselves with the British administration and took up the lion’s share of urban skilled occupations (Hanson 2003, Reid 2017). Such dynamics perpetuated the power of chiefs into the post-colonial era and contributed to a legacy of ‘decentralized despotism’ (Mamdani 1996). Despite such dynamics, however, other studies have argued and shown that mission schools became ‘colonial Africa’s chief generator of social mobility and stratification’, acting as a stepping stone to urban middle-class careers for a new generation of Africans (Iliffe 2007, p. 229; Wantchekon et al. 2015).

This article explores intergenerational social mobility and colonial elite formation using the occupational titles of African grooms and their fathers who married in the prestigious Anglican Namirembe Cathedral in Kampala (see photo above) or in several rural parishes in Western Uganda between 1895 and 2011. The fact that sampled grooms celebrated an Anglican church marriage meant they were born to parents who, by their choice of religion and compliance with the by-laws of the Anglican Church, had positioned their offspring in a social network that afforded them a wide range of educational and occupational opportunities (Peterson 2016). This unique sample allows us to explore the impact of missionary schooling on the social mobility of converts between generations and uncover implications for colonial elite formation.

To measure social mobility, we have grouped each occupation of 14,167 sampled Anglican father-son pairs into a hierarchical scheme of 6 social classes based on skill levels using HISCLASS (Van Leeuwen and Maas 2011). As shown in Figure 1, we find that the occupational mobility of sampled grooms expanded dramatically during the colonial era. By the onset of British rule (1890-99), Buganda’s society was comparatively immobile with three out of four sons remaining in the social class of their fathers. But by the 1910s, this had reversed to 3 in 4 sons moving to a different class. Careers in the colonial administration (chiefs, clerks) and the Anglican mission (teachers, priests) functioned as key steps on the ladder to upward mobility. 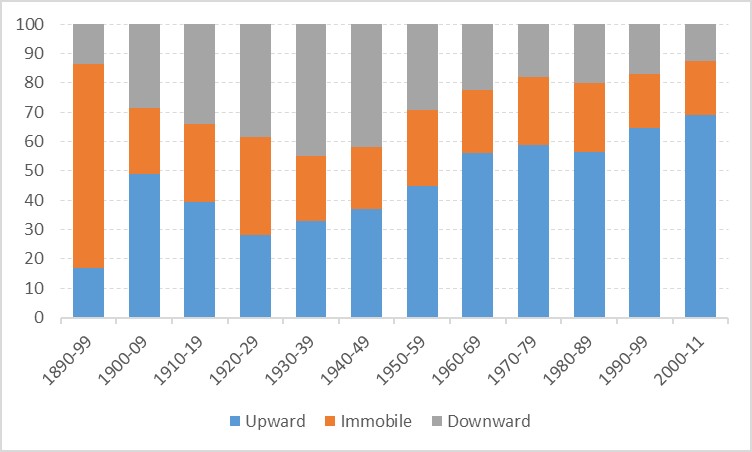 What was the social background of those reaching the highest occupational classes? Table 1 zooms in on grooms’ social-class destination relative to their social origin during the colonial era. It shows that the African converts, benefiting from new occupational opportunities opening-up during the colonial era, were able to take large steps up the social ladder regardless of their social origin. A remarkable 45% of sons from farming family backgrounds (class IV) moved into white-collar work, which indicates that the colonial labor market was generally surprisingly conducive to social mobility among Anglican converts.

Did chiefs and their sons benefit disproportionally from occupational diversification under colonialism? Under indirect British rule, many traditional Baganda chiefs converted to Anglicanism and became colonial officials, employed to extract taxes and profits from cash-cropping farmers. This put them in a supreme position for consolidating their pre-colonial societal power. Despite such advantages, our microdata suggests that the privileged position of pre-colonial elites was not sustained over the colonial period Figure 2 shows the probabilities of sons of chiefs (class I) versus farmers and lower-class laborers (class IV-VI) of entering an elite position (class I). At the beginning of the colonial era, sons of chiefs were significantly more likely to reach the top of the social ladder. However, a remarkably fluid colonial labor market, based on meritocratic principles, gradually eroded their economic and political advantages. Towards the end of the colonial era, traditional claims to status no longer conferred automatic advantages upon the sons of chiefs, who lost their high social-status monopoly to a new Christian-educated and commercially orientated class of Ugandans of farming backgrounds (Hanson 2003).

Figure 2: Conditional probability of sons of chiefs and farmers in class I, Kampala 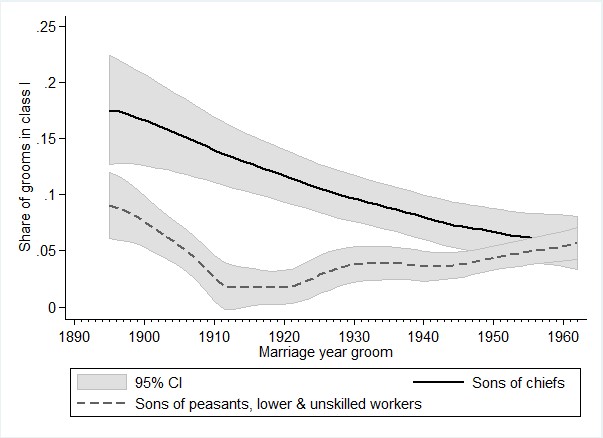 Felix Meier zu Selhausen is an Assistant Professor in the Social and Economic History Department at Utrecht University (Netherlands). His research lies at the intersection of economic history, development economics and demography. In particular, his research focuses on the relationship between religion and socioeconomic development in Africa and gender relations…  Read more

Jacob Weisdorf is Professor of Economics at the University of Southern Denmark and a research fellow at the CEPR in London. His research interests concern the wider forces that led to the wealth of nations.  Read more