This paper investigates whether the provisioning of slave ships provided a boost to West African commercial agriculture. It finds that European ships took on board far more foodstuffs from their home ports than has previously been suspected, meaning that with one possible exception, the slave trade did not stimulate the development of export agriculture in the region.

There is a big debate in African Economic History on the long-term economic consequences of the trans-Atlantic slave trade. Did it only impede growth, distort trust and retard state formation, or did it also stimulate the development of markets? (Inikori 2011, Thornton 1998, Nunn and Wantchekon 2011, Manning 2010). In this article, we ask to which extent the intensification of the trans-Atlantic slave trade during the long 18th century has boosted commercial agriculture in the coastal areas of West Africa. According to the Transatlantic Slave Trade Database (TSTD) around five and a half million captives were embarked from the region stretching from the River Gambia in the east to modern-day Gabon in the West) between the late 17th and early 19th century (representing ca.66% of all captives taken to the Americas). Although circa 15% of slaves died, most slaves spent between three and ten months aboard of a slave ship. All slaves needed food during their transportation to and stay on the coast and, most importantly, to stay alive during the horrendous middle passage from Africa to the slave plantations of the Americas.

Until now, the literature has assumed that the lion’s share of the food grown to provision slave ships was produced in Africa and sold by Africans to European merchants operating forts and slave ships. Building on this assumption, David Eltis (2013) has estimated the magnitude of the slave-trade-induced demand impulse for commercial agriculture. He reached the provisional conclusion that food exports approached a total annual value of one million British pounds (current prices) during the late 18th century. This exceeded the total value of West Africa’s commodity exports to Britain up to the mid-19th century and therefore must have substantially boosted West Africa’s export trade.

This article uses primary sources to test this conclusion. We examined the provisioning strategies of 187 British, French, Dutch and Danish slave voyages conducted between 1681 and 1807. Our sample, taken from archival collections from across Europe, is the largest study to date on provisioning strategies and includes precise details of foodstuffs taken from both Africa and Europe. Our main result, presented in Figure 1, calls for a major downward adjustment of Eltis’ estimates. We find that during the 18th century, an increasing share of the foodstuffs required to feed slaves were taken on board in Europe instead of West Africa. Moreover, we argue that food prices did not rise as much as Eltis assumed in his post-1760 estimates.

We also document considerable variation in provisioning strategies among slave-trading nations and across the main regions of slave embarkation. French, Dutch and Danish ships, responsible for around one-fifth of voyages, bought the vast majority of their food in Europe. The British tended to buy a greater share of their provisions in Africa, even though the share of food taken by British ships from Europe increased during the 18th century as well. In addition, there was considerable variation among the different regions of embarkation. Very little food was bought from the Loango coast of West Central Africa or the Bight of Benin. Ships either took food with them from Europe or bought it from other coastal regions. However, provisions were bought along the Gold Coast and in considerable quantities from the Bight of Biafra.

Figure 1: Our estimates of the average annual value of African-sourced provisions compared with Eltis estimates, 1681-1807, in constant British £ of 1700

Why did provisioning strategies rely to a much greater extent on European supplies than previously thought? Our answer focuses on the risks involved in relying on African food supplies. As the 18th century progressed, the slave trade became increasingly lucrative but also riskier. Conflicts among Atlantic nations began to disrupt merchant shipping, slave prices rose along the coast in response to increased competition, and complex credit arrangements meant that the profits of a voyage might take years to realize. As such, the most successful slave trading merchants were those who found ways to minimize risk. Ships which relied on African provisions risked substantial delays and higher mortality if local warfare or trade disputes halted food supplies. By contrast, the relative (seasonal) security of European-bought food provisions ensured that slaves could be immediately embarked and fed. Furthermore, the falling relative costs of European provisions made taking the risk of buying in Africa less cost effective, especially as increasing prices of slaves made provisioning an increasingly smaller proportion of the outlay. Since the British controlled most of the forts along the West African coast (the Gold Coast in particular), they had created possibilities to spread the risk of failing local supplies. For other slave trading nations, the risks were mediated by stocking up with barley, wheat biscuits, beans and peas at home ports. 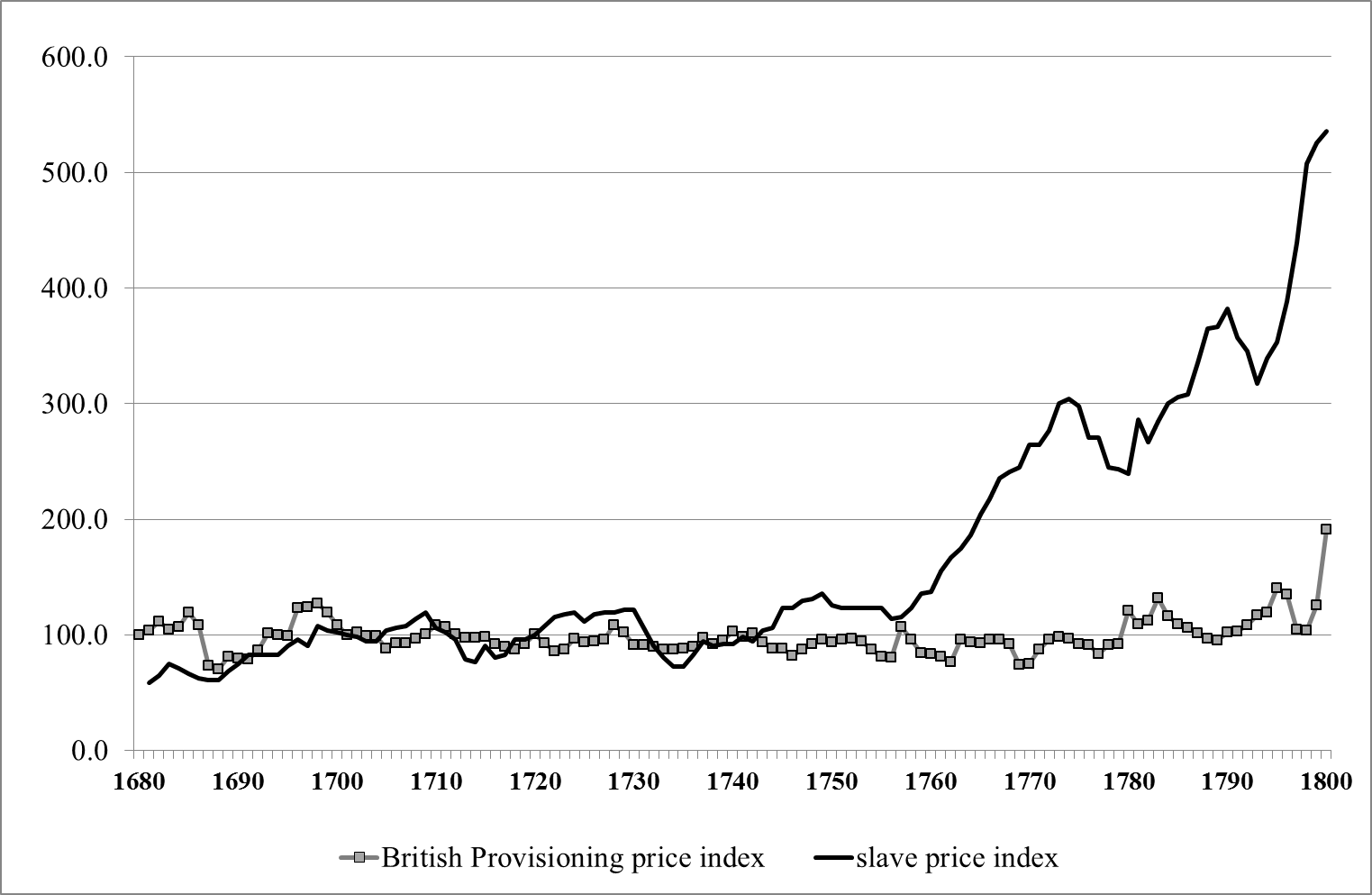 The largest exception was the Bight of Biafra, which developed sophisticated and reliable trade networks between inland farmers and the coast. They could supply up to three million yams a year, which, according to our estimates, provided the best bargain in West Africa in terms of prices relative to European food. This region, which exported comparatively few slaves at the beginning of the 18th century, had grown to be the leading exporter of African slaves by the 1790s, with the British as its principal customers. The literature has offered several reasons for the rise of Biafra in the trans-Atlantic slave trade, such as shorter loading times and better sources of credit (Lovejoy and Richardson 2004, Nwokeji 2010). We argue that its ability to provide large quantities of relatively cheap and reliable food supplies also reduced costs, and allowed slave ships to transport a healthier and therefore more valuable human cargo to the Americas.

Nwokeji, G. (2010), The Slave Trade and Culture in the Bight of Biafra: An African Society in the Atlantic World: Cambridge University Press.

Angus Dalrymple-Smith is a PhD Candidate (2013-present) at the Rural and Environmental History Group, Wageningen University, the Netherlands. His research focuses on the causes and impact of the nineteenth century commercial transition from slaves to ‘legitimate commerce’ in West Africa and the health and diets of captives during the middle…  Read more