Numeracy Development in Africa: New Evidence from a Long-Term Perspective (1730-1970)

We discuss how numeracy, based on the study of age-heaping, can expand our knowledge of human capital accumulation and economic development in Africa in a long-term perspective.

Historical events are fundamental determinants of economic performance (Allen 2011). However, until recently, research in quantitative economic history has mainly focused on today’s high- and middle-income economies. This lack of research is particularly evident for the African continent. However, some aspects of Africa’s long-term development can be reconstructed using new proxy indicators. Although these might capture dimensions of social and economic change with a certain degree of measurement error, they are crucial to understand the economic history of the continent. In our paper we construct a panel dataset of numeracy that includes several African countries from the beginning of the 18th century until the end of the colonial period (1970) in 10-year intervals (Figure 1).

Our numeracy dataset is based on three sources. First, for the period 1800–1970, we rely on census data from 20th-century official national statistics, as well as censuses conducted in the second half of the 19th century. This census-based evidence is integrated by Senegal’s numeracy series coming from age data found in French archival colonial censuses (see feature image above). Numeracy figures for South Africa are obtained from several consecutive censuses stretching from the mid-19th century to the 1970s. Second, a small number of additional observations for the period of 1850–1900 were obtained from contemporary anthropological reports. Third, to obtain numeracy series in the period 1730–1800 we complement this evidence with slave censuses compiled in the second half of the 18th and early 19th century. 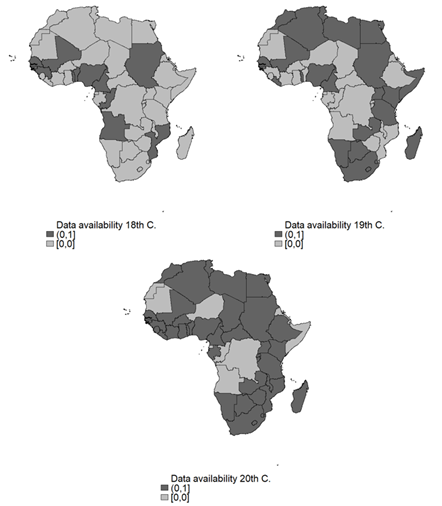 Note: [0,1] indicates the availability of numeracy figures, while [0,0] means unavailability.

Numeracy as an Index of Human Capital in Africa

Numeracy, which is an important component of overall human capital, is estimated by studying age heaping, i.e., the tendency of individuals who do not know their exact age to declare it as ending in digits zero or five. Numeracy correlates with indices of African education, like the Gross Enrolment Rate (GER) in 1938, as shown in Figure 2.

Figure 2: Average numeracy (%) in 1940 plotted against the Gross Enrolment Rate (%) in 1938 across African countries 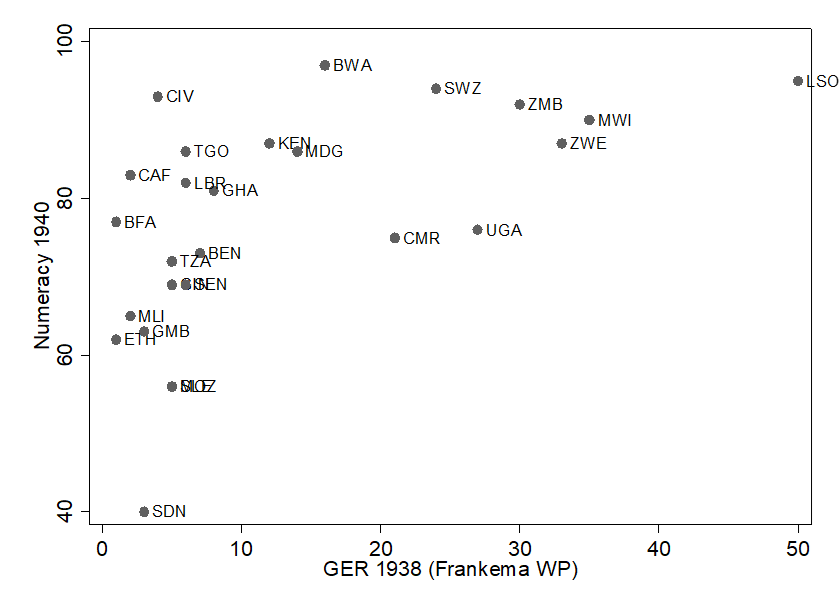 Source: Own elaboration from primary sources and from Frankema (2012).

This is the first study to reconstruct numeracy – and its increase over time – for a large number of African countries from the pre-colonial to the post-colonial era. Numeracy improved since the late 18th century from a relatively low level. The increase in numeracy accelerated in the 1830s, when the slave trade gave way to legitimate trades, and kept increasing at roughly the same pace until the 1880s, when numeracy started to improve at an increased speed. In the first two decades of the 20th century, despite having increased already, numeracy grew at the most rapid pace.  After the 1920s, the increase in numeracy slowed but remained steady.

Within this overall pattern, we can focus on country-specific trends, particularly those depicted by long time series during the 19th century: Senegal, Egypt, South Africa and Tanzania. In Senegal, the stagnation of numeracy in the early 19th century gives way to a steady increase in the second half of the century (albeit not particularly fast compared to the overall trend). By contrast, in South Africa – where the colonial education and political system switched from Dutch to British in 1806 – the increase in numeracy was already rapid since the early-19th century. In North Africa (and Egypt in particular), we observe stagnation of numeracy at a very low level until the late 19th century. This stagnation around the mid-19th century and a later steady growth can be confirmed by evidence on individual birth decades relating to Tanzania. This descriptive evidence also suggests that the increase in numeracy was generally more rapid in areas that were influenced by the British education system (Figure 3). 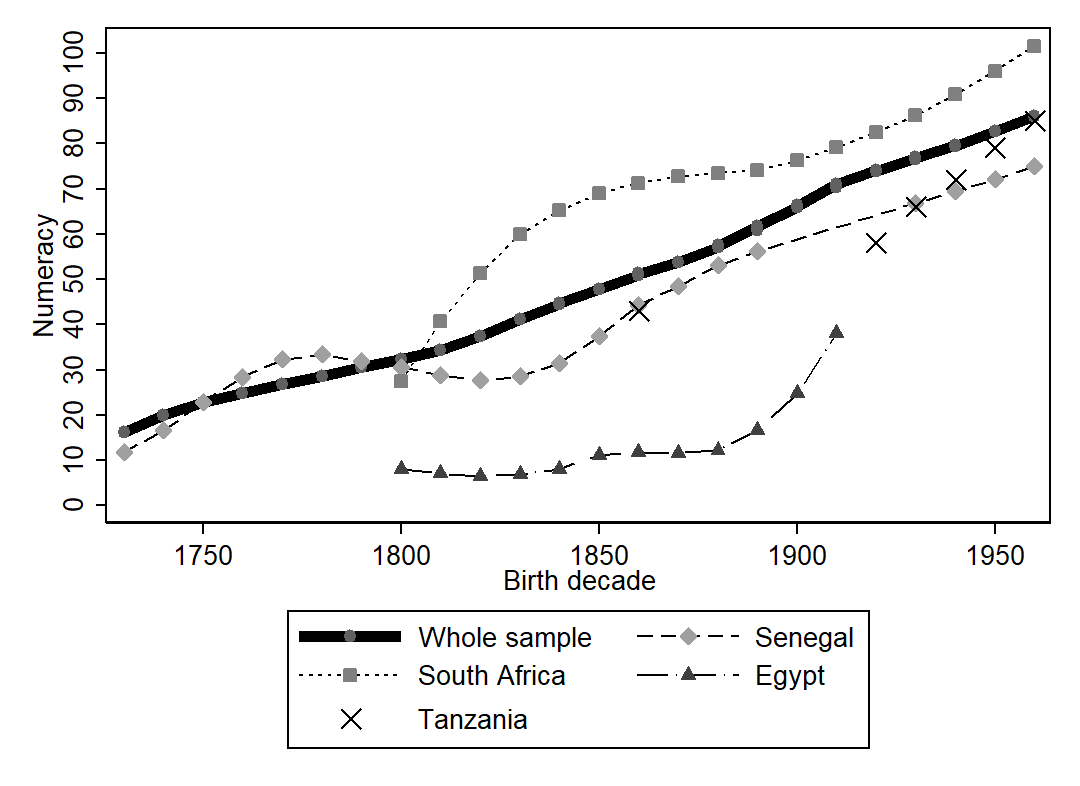 Notes: The trends for Senegal, South Africa, Egypt and Tanzania are examples. The whole data covering 43 countries is included in the “whole sample” lowess-smoothed line.

Obviously, European colonialization had many extremely adverse effects on African development. However, concerning the educational sphere, earlier studies have found mixed results (Frankema 2012). The administrations sought to strengthen the diffusion of Western schooling as a way to legitimize their rule (White 1996). Hence, we use econometric models to study the existence of a systematic correlation between the increase of numeracy and colonial education systems – even though missionary schooling also mattered for the diffusion of education in Africa (Meier zu Selhausen 2019). As a second step, we explore if British colonial education policy prompted a more rapid increase in numeracy compared to that taking place in other territories, while controlling for the fact that the British might have colonized territories favorable to socioeconomic development in the first place. The presence of a colonial education system is captured by a dummy variable equal to one if a country  was under European rule in period .

We also control for a number of variables that are known to be relevant for the historical development of Africa, such as the slave trade, the cash-crop trade, the strength of precolonial institutions, suitability to the tsetse fly, and the presence of colonial railways. We find that the within-country positive correlation between colonial education and numeracy was driven by the British territories: they were characterized by a 1.5 percentage-point premium on the average annual increase in numeracy, while colonial education is found to have been negative in other areas of Africa. The estimated coefficient is quite large, as the mean annual increase in numeracy from 1730 to 1970 is equal to 1.2 percent.

Although we focus on colonial education systems, our results are consistent with the view that African agency was also an important aspect of the numeracy path followed by African countries, one which interacted with colonial institutions. Indeed, the choices and responses of Africans to changing incentives during the colonial period (Frankema 2012), as well as the role played by African missionaries at the turn of the 20th century (Meier zu Selhausen 2019), were factors that were strongly associated with the increase in numeracy and, in general, human capital accumulation, particularly within British Africa – which reinforced the action of mission schools through subsidies and allowed the use of African teachers and languages to foster education.

While the hypotheses that we explored have been studied in related works (Frankema 2012; Cogneau & Moradi 2014), previous analyses could not focus on precolonial numeracy as an important component of human capital and did not consider such a large sample of African countries.

This analysis is also related to a substantial literature on colonial education legacies in Africa. Quantitative evidence obtained by Bolt & Bezemer (2009) has shown that the variation in growth across Sub-Saharan African countries is explained better by cross-country variation in colonial education than by legal origins and geography. Beyond the narrative highlighting persistence, our work shows the extent of change in basic education across African countries and over time. Even when controlling for initial human-capital and socioeconomic conditions, our numeracy figures suggest that British colonial education policy led to more-rapid human capital accumulation compared to other areas of Africa.

Cogneau, Denis, and Alexander Moradi (2014). ‘Borders That Divide: Education and Religion in Ghana and Togo Since Colonial Times’. Journal of Economic History 74 (3): 694–729.

Feature image: A sample of the sources used to collect age-heaping (numeracy) data, from the National Archives of Senegal. Note, ages are shown in the second column from the left.

Gabriele Cappelli is Assistant Professor of Economic History at the University of Siena and Research Affiliate at CEPR. He holds a PhD in History and Civilization from the European University Institute. He investigates institutional change, schooling and human capital accumulation, and long-term economic performance in a comparative and regional perspective.  Read more