Skip to content
Home › Mining, Paternalism and the Spread of Education in the Congo since 1920

Mining, Paternalism and the Spread of Education in the Congo since 1920

I assess the sub-national differences in school enrollment in the Belgian Congo and find that those areas where large firms operated displayed higher rates. This can be traced back to paternalistic policies of labor stabilization supported by the colonial triad formed by state, private industry and missions.

As education was the main reward missions used to lure Africans into Christianity, missionaries became the main provider of formal education on the continent particularly from the mid-19th century. Thus, in explaining the deep roots of educational disparities within Africa, scholars have studied the factors that promoted or curtailed the activity of Christian missions on the continent: geographic factors and policies, whereby the latter differed mostly by metropolitan power (Frankema 2012; Jedwab et al. 2018). In particular, differences between French and British colonial governments have been highlighted (Cogneau & Moradi 2014; Dupraz 2019). Following its secular tradition, the French colonial state provided the bulk of education and restricted missionary activity. British officials saw Christian missionaries as a cheap provider of education and gave them free hand in running schools.

This paper (Juif 2019) adds the case of a Belgian African colony to the debate by tracing school enrollment at a national and sub-national level back to early colonial times, and by explaining the observed regional differences. Geography, particularly accessibility and the disease environment, played a role in determining mission location at the beginning. However, I argue that the presence of large companies was probably a more important factor explaining regional disparities in mission schooling that crystallized in early colonial times and persisted into the post-colonial era. In the Belgian Congo, the state soon intervened heavily and cooperated with Christian missions in the provision of education, to meet the demand of the industry and polity for a workforce with basic skills.

First, Figure 1 quantifies school enrollment in subsidized and non-subsidized schools in the Congo from 1920 until the end of colonial rule. The spread of missionary activity during the 1920s was huge, especially after the colonial government started to grant subsidies to schools in 1924. The rise in pupil numbers (around 4-fold between 1930 and 1958) by far exceeds demographic growth (the number of children did not even double). Almost all of them were enrolled in primary and only about 2 percent in secondary school (see also Frankema 2013). As of 1984 (not shown), the number of pupils had risen 4.5-fold again compared to 1958. 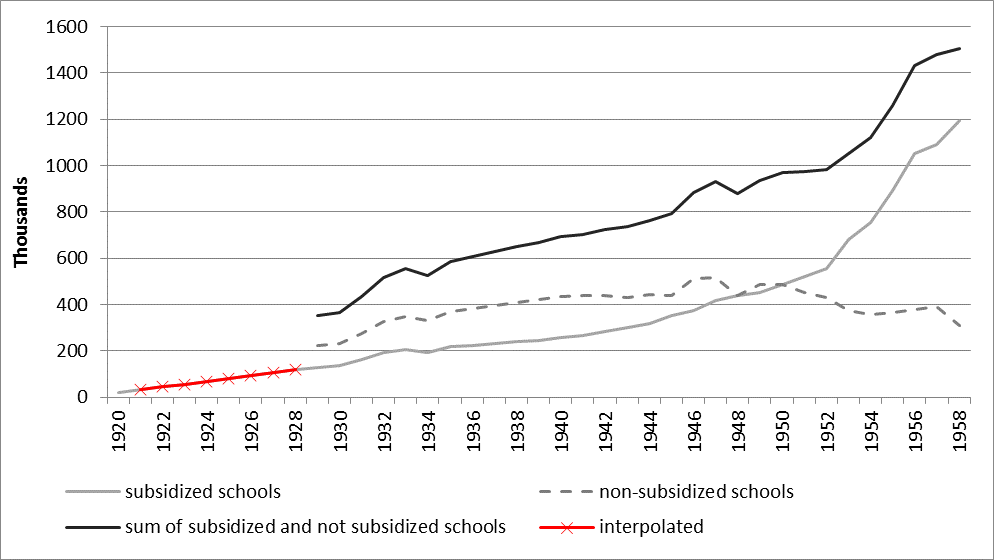 Sources: Annual Reports of the administration of the Colony of Belgian Congo, 1920 to 1958.

Note: The number of children enrolled in non-subsidized schools between 1920 and 1929 is interpolated.

Next, Table 1 divides the number of students (almost only boys) enrolled in the schools that I previously assigned to a province by the number of boys living in the province according to the census. The result points at remarkable regional disparities. In the East, Katanga’s enrollment rate diverged from the rest of the colony being almost double the national average during the 1930s and 1940s. I further zoom into the district of Haut Katanga, where the large state-backed concessionary company Union Minière du Haut Katanga was located, and which had enrollment rates twice as high as the provincial average. Katanga was followed by the provinces of Kasai and Orientale, where other concessionary companies operated, like Forminière (diamond mining) or Les Huileries du Congo Belge (palm oil). On the other hand, the province of Kivu, dominated by smallholders and some European settler farming, keeps occupying the last place on the list. 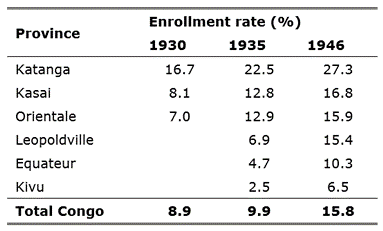 Sources: Author’s own calculations. Data from Annual Reports of the administration of the Colony of Belgian Congo, 1930, 1935 and 1946.

Note: Until 1930, the territory was divided into four provinces, Katanga, Orientale, Congo-Kasai and Equateur, but the latter did not record statistics on student numbers. Results remain similar if we assume school-age population to be 20% of the total population.

To assess the possible persistence of regional colonial-era disparities into the post-colonial period I use information on enrollment and illiteracy (of women only, due to data availability) in 1984 from the population census reports (Table 2). There is considerable persistence except that Leopoldville, the capital, has overtaken the other provinces in educational performance. This might also be because administrative jobs which require education were made available after independence.

Note: Province boundaries of 1984 were harmonized with those of 1950 (enrollment and literacy weighted by the population of 1984 provinces were combined into 1950 provinces). Due to issues concerning colonial data, the enrollment rates are not directly comparable with those in Table 1, but the rank of provinces in educational performance can be contrasted.

The demand of the concessionary companies, which engaged mainly in mining, transport and plantations, for a stable workforce with basic skills rose after the First World War. The aim of the industry-state partnership was to curb the long-existent labor scarcity, to avoid high and expensive labor turnover, and to replace skilled white workers by cheaper indigenous ones. Once most workers settled in compounds with their families, firms had to provide welfare services, including schooling for workers’ children. In an understanding between industry, state and missions, workers’ children living in camps were educated by missionaries to become an obedient future labor force (see also Juif & Frankema 2018).