Labour Control and the Establishment of Profitable Settler Agriculture in Colonial Kenya, c. 1920-45

Ongoing scholarly debate cites extractive colonial institutions as a root cause of Africa’s comparatively low economic development. The role of institutions is emphasized particularly in historical research on settler colonialism. It is held that in settler colonies such as Kenya and Zimbabwe, living standards declined as the state intervened in land and labor markets to ensure a steady supply of cheap labor to settlers (Arrighi 1970, Palmer and Parsons 1977). Land alienation and the subsequent relocation of Africans to remote native reserves with relatively poor soil quality caused African agricultural yields to decline. Combined with rising taxation, this resulted in unlimited labor supplies. Hence, it is argued, the decline in African livings standards was a pre-condition for the expansion of European business. The outcome was an economy characterized by persistent high levels of inequality and stunted economic development. Recent scholarship has suggested that such effects were persistent, tracing current high poverty and inequality levels back to the decision to encourage and nurture European settlement (Acemoglu and Robinson 2010).

Yet the empirical evidence underpinning the above classical view is not overwhelming and scholars have questioned whether political mechanisms were as widely used as was previously assumed (Mosley 1983, Bolt and Green 2015). To better understand the link between settlement and African living standards, it is valuable to explicitly study settler profitability in the context of various labor policies.

In a recent article (Fibaek and Green 2019), we make a first effort to measure the profitability of settler agriculture, using Kenya as a case study. To do so, we calculate European agricultural earnings by deducting annual costs of labor, agricultural inputs such as fertilizer and machinery, transport, and other transaction costs from annual values of European agricultural production. Figure 1 shows that settler profitability started to rise in the early 1920s. Earnings were sensitive to the global economy and the Great Depression caused a temporary decline. Figure 2 reveals that the rise in earnings was driven by an increase in real value of output per worker, which we can attribute to a shift from maize and barley to high-value cash crops such as coffee and sisal. 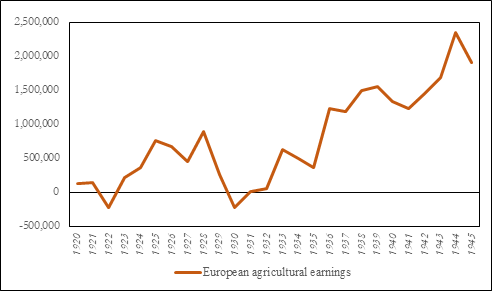 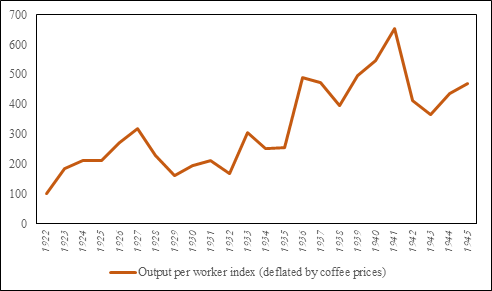 A rise in real output per worker should, ceteris paribus, have led to growing real wages. However, when calculating welfare ratios for African unskilled agricultural workers, we see a sticky wage level close to subsistence for the entire period (Figure 3). 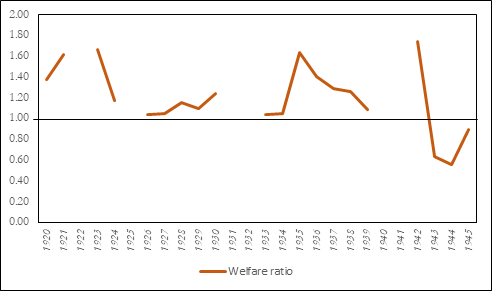 Were persistently low wages driven by declines in rural African living standards? No, we argue. Using detailed information collected from annual district reports, we paint a different picture of development in labor supplying areas. We find that areas that had the highest share of labor supply prospered compared to areas with lower rates. Average African agricultural earnings in labor supplying areas rose in the period and so did agricultural commercialization. This suggests that wages might have been re-invested in agriculture. Furthermore, the number of days a worker would need to work to pay annual taxes declined in the period.

The role of labor control

Our case study findings do not support previous claims that taxation combined with declining African agriculture was a prerequisite for an expansion of European business. Still, we argue, Kenya’s labor supply dynamics did not constitute a win-win scenario either. Due to increased commercialization of African agriculture it became important for the settlers to control the mobility of African workers. An emerging labor control regime enabled white settlers to reduce both upward pressures on real wages and transaction costs of finding and retaining workers. In the first decade of European settlement, competition among settlers and the colonial administration over scarce labor caused a substantial rise in real wages. To make matters worse for the settlers, workers would often desert. As a temporary solution, settlers tried to encourage Africans to reside on their farms. Initially, the African tenants were able to negotiate fairly good conditions; some would work a limited number of days in return for tenancy, while others paid rent.

This changed in the late 1910s, shortly before the European sector expanded with the introduction of the Resident Native Labour Ordinance and the Registration of Natives Ordinance. The laws severely limited African mobility and raised the workload of the tenants. Strong penalties were enforced as part of the labor contracts under the pass laws forbade Africans leaving the reserves without a passport. The decrease in transaction costs was not the only ‘advantage’ of the restricted mobility of Africans. Lowered mobility also implied a reduction in the bargaining power of the African worker placing a downward pressure on nominal wages. We expect that our findings are not unique to Kenya, as similar measures were taken to reduce labor mobility in for instance South Africa and Zimbabwe.

Arrighi, G. (1970). Labour supplies in historical perspective: a study of the proletarianization of the African peasantry in Rhodesia. Journal of Development Studies 3: 197-234.

Maria Fibaek is PhD Candidate at the Department of Economic History at Lund University. Her research focuses on long-run changes in rural livelihoods and welfare in East Africa.  Read more