In an attempt to divide and marginalize the black population, the apartheid regime forcefully relocated some 3.5 million South Africans to rural homelands. This paper finds that people in former resettlement camps areas have higher levels of social capital and lower levels of crime.

South Africa’s minority white population elected the Afrikaner-led National Party in 1948, marking the official start of the apartheid regime that would be in power for the next 46 years. The newly elected government soon faced mounting pressure from increased urbanization and political mobilization within the black population. Spatial segregation thus became important for the survival of the apartheid regime (Simkins 2011). The government created a system of ten ethnically distinct homelands (also called Bantustans), shown in Figure 1, with the goal of dividing the black majority and promoting tribal identity and allegiances. Ethnic groups were defined using white anthropologists’ racist classification and homeland borders were determined by the location of resources and interests of white farmers (Rogers 1980). 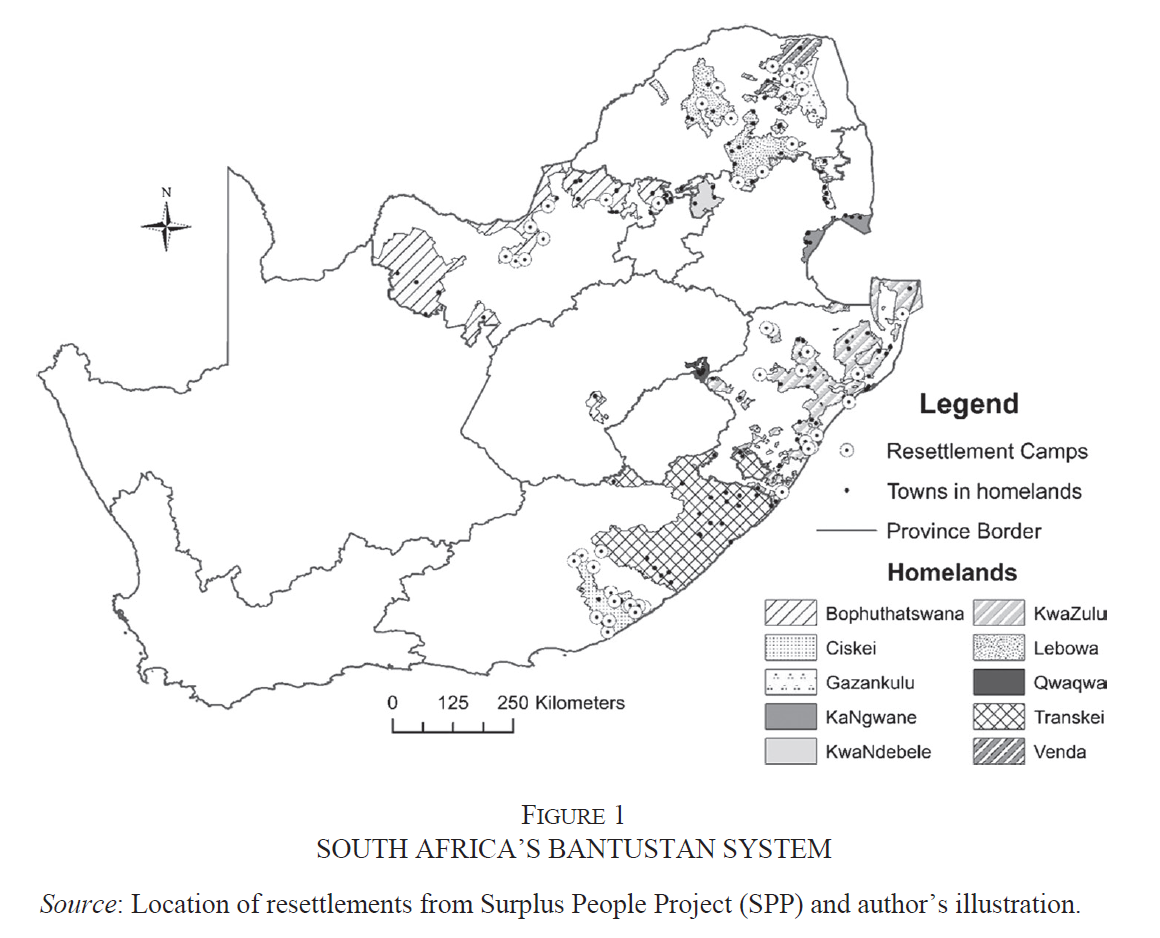 Under the rhetoric of “separate development”, some 3.5 million black South Africans were deported to resettlement camps (located within homelands) between 1960 and 1980. Due to the lack of economic opportunities, many had to migrate for part of the year to work in the mining industry or as domestic workers, which weakened the core family.

Life in resettlement camps had both cooperative and competitive elements. On the one hand, scarcity exacerbated conflict over scarce resources; on the other hand, people needed to build new support networks to survive. Consequently, historic accounts report both “endemic violence” (Rogers 1980) as well as acts of solidarity among the displaced. This ambiguous effect on social cohesion and social capital within the resettlement communities motivates the empirical investigation of my study.

How does Social Capital Develop in Resettlement Camps?

This paper (Abel 2019) uses Afrobarometer data collected between 2000 and 2010 and newly digitized surveys and maps from the Surplus People Project (SPP 1981, data available for download). Comparing measures of social capital in former resettlement areas evolve compared to adjacent areas in the same homeland (see Figure 2). I find that people living in former resettlement sites have higher levels of social capital: They are more trusting towards relatives and neighbors, and are 7.7 percentage points (39%) more likely to state that people in general can be trusted. Residents of these communities also experience lower levels of crime: reported incidences of physical violence are 30% lower in former resettlement areas. Effects on younger cohorts are either the same or larger, indicating that the removal policies had a persistent impact on affected communities. Additional analyses suggest that these differences are not the mere result of (selective) migration, increased urbanization or closer proximity of resettlement camps to homeland borders.

What may explain these results? Life in resettlement camps reduced social distance and facilitated a new identity as “resettled people”: people lost their property and were assigned a standard size plot of land. They were not allowed to bring along cattle, which was not only a source of livelihood but also an important symbol of social status. The arbitrary assignment of plots in resettlement camps further facilitated the formation of networks across ethnic lines, echoing findings from the social psychology literature that social proximity fosters a common identity, trust and cooperation (Putnam 2008).

Resettlement may have thus inadvertently helped to create a common identity as displaced people, which bridged ethnic cleavages within the African community and facilitated a protest movement that eventually led to the democratic transition in 1994 (Posel 2011).

These findings relate to a puzzle in the literature on the relationship between diversity and social capital. Studies using large aggregate (macro) survey data find a robust negative relationship between ethnic heterogeneity and trust (Alesina 2005). By contrast, recent (quasi-) experimental studies find that exposure to people from different backgrounds increases social capital (e.g. Clingingsmith 2009, Okunogbe 2018). Are these micro-studies not representative, or do macro-studies confound effects of diversity with other unobserved factors (e.g. public good provision)?  Evidence from forced resettlements, which has been coined the “ultimate apartheid experiment” (Christopher 2001), may offer an opportunity to shed some light on this important question.

I document that despite the goal of creating ethnically homogeneous homelands, camp areas tend to be more ethically diverse than other parts of homelands. Importantly, ethnic fragmentation is positively correlated with measures of inter-ethnic trust only in resettlement communities (see Figure 3), supporting conclusions from micro studies that find a positive causal relationship between diversity and social capital. 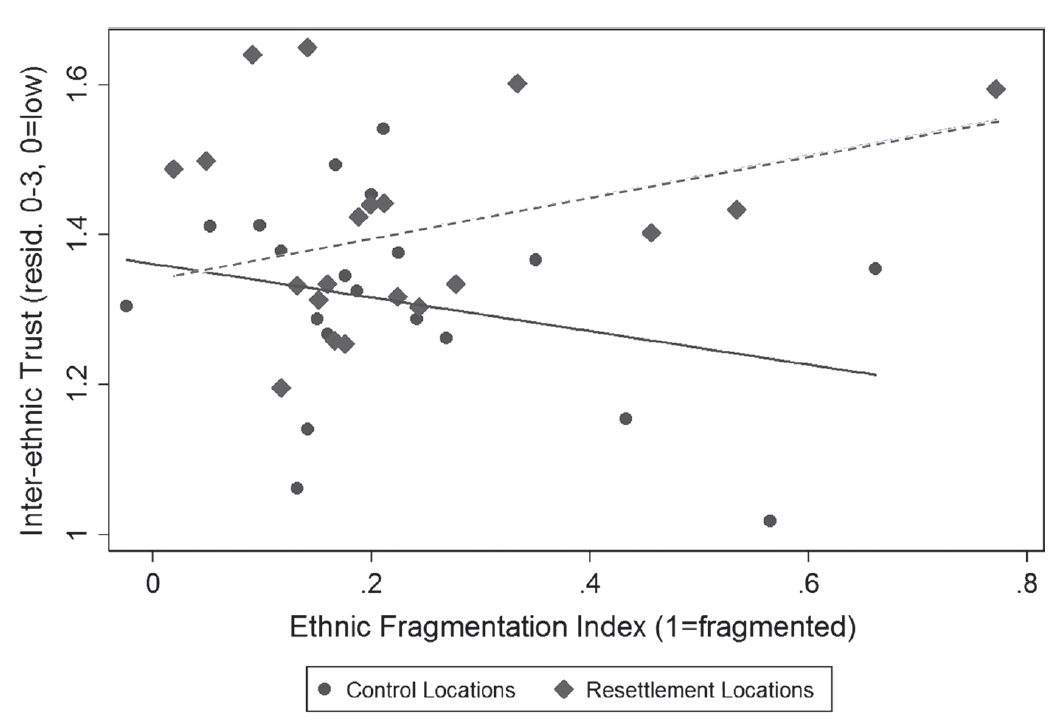 In sum, results suggest that in the long run, the exposure to a large inﬂow of people from different backgrounds increased understanding of and trust towards different groups, despite potential short-term conﬂict over resources. The implications are of historic importance. Posel (2011) speculates that “everyday racial crossings opened … spaces for political allegiances, solidarity and friendship that would ultimately contribute critically to the [apartheid] regime’s demise.”

Martin Abel is an Assistant Professor of Economics at Middlebury College. Martin received his PhD from Harvard University and works on topics at the intersection of development, labor and behavioral economics. He is conducting field experiments focusing on topics of information asymmetries and discrimination in labor markets.  Read more