The rapidly expanding literature on historical tax systems has largely overlooked the “invisible” revenue from forced labor practices. Based on a unique dataset for the French African corvée system, I show that the labor tax component of African colonial budgets was often as large as the total cash contributions during the early stages of colonial rule. These pioneering findings underline the central place of forced labor in the fiscal development of colonial Africa.

Ongoing scholarly debate about the connections between taxation, state building, and long-term economic development, has revitalized and globalized the study of historical tax systems (Bräutigam et al. 2008; Besley and Persson 2011). How did states initially acquire “fiscal capacity”, and why was this process more successful in some parts of the world than in others? With African tax systems being among the weakest in the world today, the historical roots of the region’s low fiscal capacity are of especial interest.

Despite a recent surge in studies on African colonial public finance (Frankema 2011; Gardner 2012; Huillery 2014), this literature has largely excluded the “invisible” tax revenue that accrued to the state from forced labor practices. My doctoral research integrates the place of forced labor into the analysis of colonial fiscal capacity building efforts. Not only did labor contributions immediately relax colonial budget constraints, they also helped colonial governments pursue their longer-term fiscal capacity objectives (van Waijenburg 2017).

In a recent article (van Waijenburg 2018), I have made a first effort to estimate the revenue that colonial governments obtained from forced labor practices. This is a challenging task for a variety of reasons. The heterogenous nature of colonial labor coercion schemes, for one, makes them difficult to measure in a temporal or spatial comparative framework. Additionally, data on forced labor is generally scarce and unreliable. Faced with a rising tide of international pressure to abolish forced labor, most colonial governments tried to minimize public knowledge of their compulsory labor schemes, thereby leaving few archival traces behind. Even when records were kept, we have to be concerned about systematic underreporting. It is thus not surprising that leading historians of Africa have long held that forced labor practices are “impossible” to measure (Young 1994, p. 173; Conklin 1997, p. 223).

Although it is indeed impossible to precisely estimate the total amount of revenue stemming from colonial forced labor schemes, we can move forward with the more modest objective of first scaffolding the orders of magnitude that are at stake. For this, we need to estimate a conservative lower-bound of the labor tax revenue. If colonial governments would have had to hire even a subset of all the forced labor they used for a free market wage, how much revenue would they have then needed to pay for this?

Corvée labor is the most suitable starting point for such an estimation for several reasons. First, with the ILO still accepting corvée as a legitimate form of forced labor until the Second World War, colonial governments were more likely to keep systematic records of it. Second, certain traits of corvée labor facilitate more straightforward calculations. Not only was corvée labor completely unpaid work for the state, it also applied to a well-defined share of the population (usually all of the adult male population that colonial governments deemed to be in good enough health). If we, therefore, know the average free market rates for unskilled labor and the number of corvée days that applied to each adult male in each colony c in a given year t, we can derive the “shadow revenue” of corvée labor with the following calculation:

The French African corvée system known as the prestations, provides a unique opportunity for making such a calculation. In most French African colonies, the prestations formally took effect in the early 1910s, and were relatively well-documented for their duration. I collected a range of qualitative and quantitative sources on the prestations for 15 French African colonies, including the number of corvée days that were imposed in each district. Additionally, I constructed a public sector wage series for unskilled labor for each of colony that was included in my study. These data allowed me to estimate a lower bound of the “invisible” corvée labor revenue. 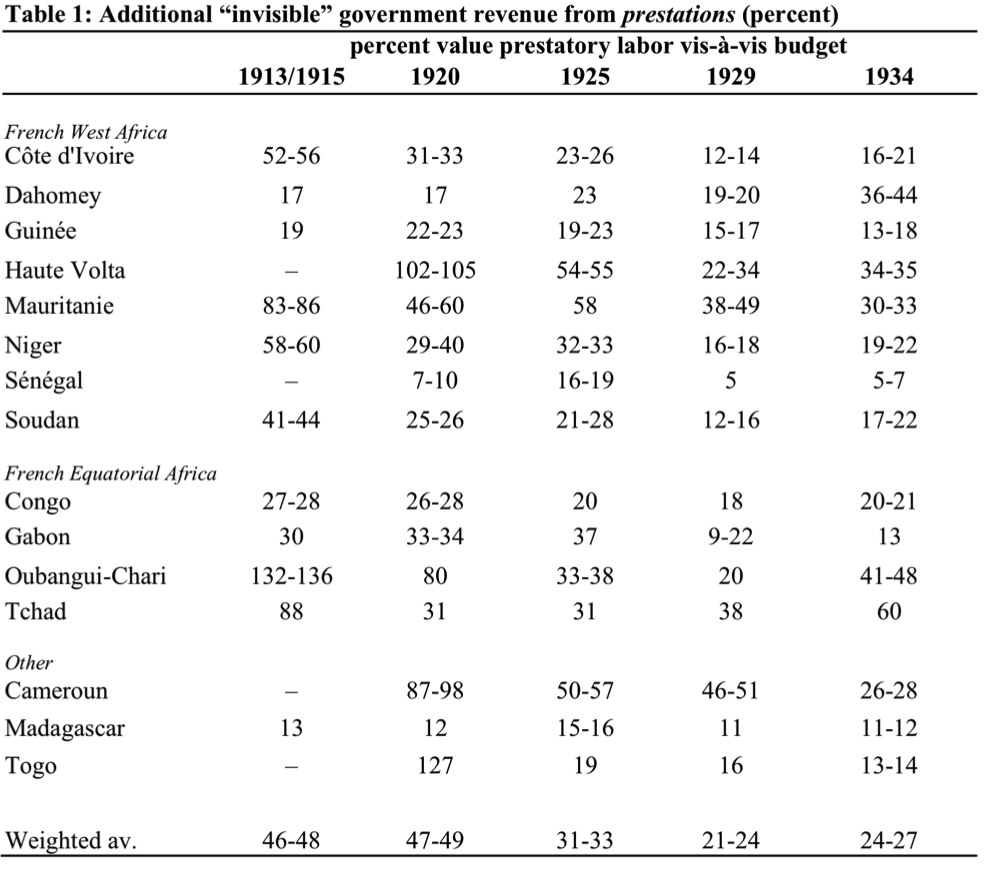 Table 1 presents the additional corvée revenue as a share of the total cash component of the budget for five benchmark years. Figure 1 shows the expected trend for Côte d’Ivoire and Soudan for the pre-1913 era. Since the prestations were only formalized in 1913, but had existed in many colonies well before that date, it is useful to push these estimates further back in time such places. The large shares of additional corvée revenue in both table 1 and figure 1 make clear that even a lower-bound of forced labor contributions was already substantial during the early stages of colonial rule. The colonial public finance literature should, therefore, make greater efforts to integrate this in-kind source of government revenue into the analysis.

Figure 1: Estimated implied additional income colonial state from prestations (percent) in Côte d’Ivoire and Soudan, 1903-1937 relative to the size of the budget 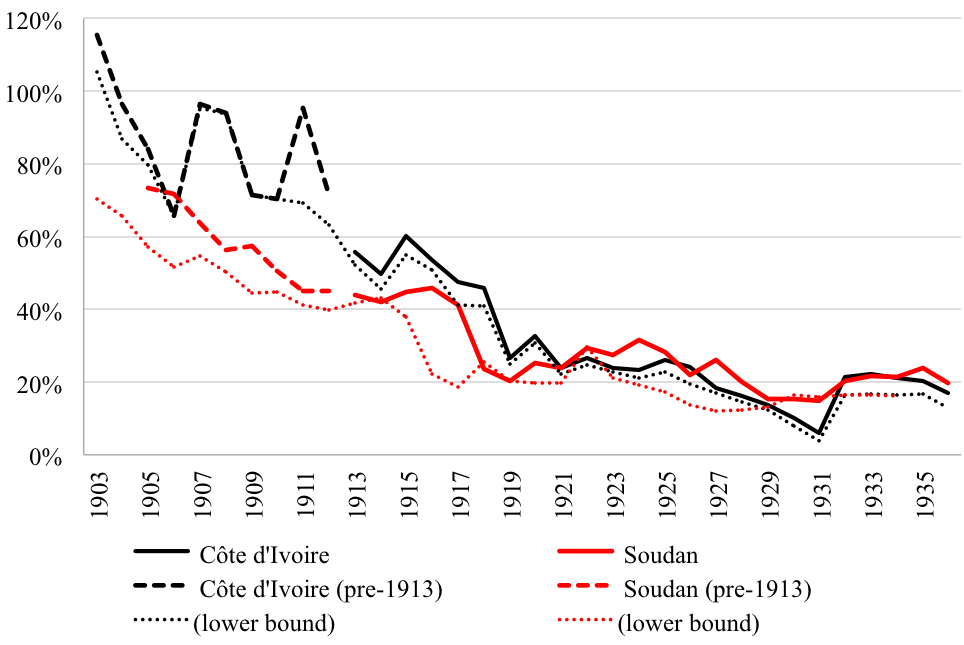 Notes: For this figure, the same calculation applied as for table 1. Since no data on the average amount of corvée days exists for the pre-1913 years, this number was held constant at the level as observed in 1913.

Marlous van Waijenburg is Assistant Professor of Economics and Postdoctoral Scholar in the Society of Fellows at the University of Michigan. Her research focuses on comparative and long-term analyses of African economic development, fiscal institutions, material living standards, and (coercive) labor markets. Her doctoral thesis on colonial fiscal capacity building…  Read more