Skip to content
Home › African Agricultural Productivity and the Transatlantic Slave Trade: Evidence from Senegambia in the Nineteenth Century

African Agricultural Productivity and the Transatlantic Slave Trade: Evidence from Senegambia in the Nineteenth Century

The level of agricultural productivity in Africa has been an almost perennial topic in academic research. Scholars that have analyzed the historical productivity of African agriculture have generally believed that the prospects facing African farmers have been quite bleak. Land abundance in pre-colonial Africa did not necessarily translate into high agricultural productivity (Austin 2008). Even more importantly, several scholars have argued that differences in productivity of African labor on the two sides of the Atlantic may have constituted a key part of the explanation for the transatlantic slave trade; making it more profitable to export slaves than to exploit their labor-power for production in Africa (Hopkins 1973). Other scholars, on the other hand have questioned this idea of relatively lower productivity of African agriculture, along with its implications for the slave trade (Thornton 1990; Inikori 2013). However, the arguments on both sides of this debate have been based on circumstantial evidence without providing direct empirical support either way.

Agricultural productivity in a comparative perspective

This article contributes to the broader debate on land and labor productivity in Africa by providing quantitative evidence on agricultural productivity in early 19th century Senegambia. In the case of Senegal, we employ sources on agricultural productivity data for early 19th century Senegal obtained from the French National Archives. The official sources contain information on the cultivation of cotton, indigo, millet, and maize in the colony, for a couple of benchmark years within the periods 1825–9 and 1843–5, respectively. In the case of The Gambia, similar data are obtained from a report by the Commissioner of Inquiry on the Western Coast of Africa, available from the British National Archives We then compare these empirical estimates of early 19th century agricultural productivity in Senegambia with similar, but longer time series of data from the Americas (the US and islands in the West Indies) and other places in the world found in secondary literature. 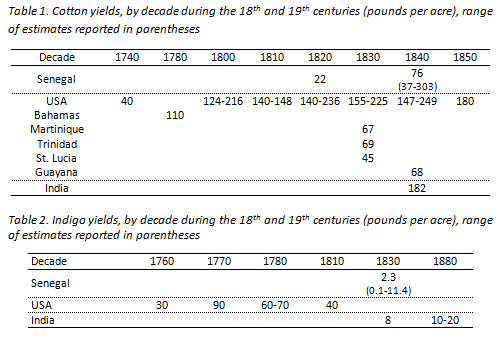 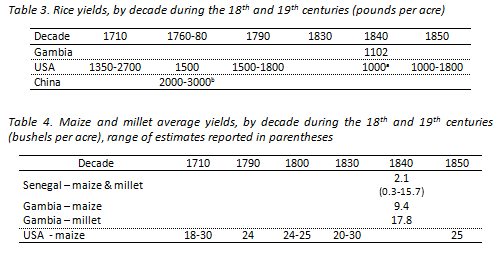 Tables 1-4 show average land productivity for the five different crops — cotton, indigo, rice, maize and millet — comparing data from Senegambia with data from elsewhere in the world. Where the sources allow, the range of estimates from the various plantations is also reported in the tables in parenthesis.

Our case-study findings thus do not support previous claims that agriculture during the early modern period was relatively competitive by international standards in this part of Africa. On the contrary, we argue that lower land productivity may have been one of the factors that restrained economic development and in particular inhibited the development of commercial agriculture in the region.

Our findings lend support to the hypothesis that the low-productivity of agriculture in Senegambia may have contributed to an economic rationale for the growth of the external slave trade during the 18th and early 19th centuries. Due to a lack of historical data, it is difficult to establish productivity levels prior to the slave trade. However, our estimates do show that agricultural productivity in Senegambia in the early 19th century was markedly low relative to both contemporary and much earlier figures from the Americas.

Klas Rönnbäck is Professor in Economic History at the Department of Economy and Society, University of Gothenburg. He has published research on African and Atlantic economic history in many different journals. His publications include “Labor and Living Standards in Pre-Colonial West Africa: The Case of the Gold Coast” (Routledge, 2016)…  Read more

Dimitrios Theodoridis is a Post-doctoral Researcher in Economic History at the Department of Economy and Society, University of Gothenburg. His research focuses on the interplay between trade and natural resources with a special focus on colonialism, industrialization and slavery.  Read more