Did colonialism shape African women’s lives in the long term? Exploiting the former colonial partition of Cameroon, we find that women on the British side of the historical Anglo-French border are today more economically empowered than their French counterparts, but are also more likely to be victims of domestic violence.

The impact of colonialism on economic development has been a popular object of study across the social sciences. At the macro- and micro-level, scholars have linked colonial history to a variety of outcomes: economic performance (Acemoglu, Johnson, and Robinson 2001), public investments (Huillery 2009), education levels (Cogneau & Moradi 2014; Dupraz 2019), and trust in medicine (Lowes & Montero 2021), just to mention a few. Surprisingly, there is little well-identified evidence on how the identity of the colonizer shaped women’s economic, social, and health status. In a recent paper (Guarnieri & Rainer 2021), we shed light on this question utilizing a unique historical laboratory: the post-World War I partition of former German Cameroon between France and the United Kingdom under a League of Nations mandate.

At the end of World War I, the Allies seized German colonies in Africa. Figure 1 shows that the western territories of today’s Cameroon were arbitrarily divided between France and the United Kingdom. During a meeting in London in February 1916, the British representative Lancelot Oliphant asked the French representative George Picot to draw a line on the map of German Kamerun. At the end of the war, the Picot line became the international border between French and British Cameroon. The border was drawn with little consideration for pre-existing geographic, economic, and ethnic boundaries.

Figure 1. Evolution of boundaries in Cameroon

The annual reports that the two colonial powers sent to the League of Nations reveal that the British and the French administrations affected women on the two sides of the border in significantly different ways. In particular, British colonial rule offered new occupational opportunities for women. After abolishing the German practice of forced labor, the British colonizers introduced cash wages and imported their expertise in export-oriented crop cultivation from their Asian colonies, along with the respective female-dominated employment customs. Plantation labor, formalized within the Cameroon Development Corporation, opened up unprecedented employment opportunities for the local population, and in particular for women. “Women employed in the salaried professions ha[d] conditions of service identical with those of their male counterpart” (Government of the United Kingdom 1958).

In contrast, the French administration retained the extractive labor system introduced by the Germans. In the first decade of domination, the French colonial state invested in the male-employment-dominated infrastructure sector, to build railways and roads. In sharp contrast to British Cameroon, the export-oriented sector in French Cameroon did not attract female labor: “in all regions exporting products with a hired labor force there was no employment of women for agricultural or industrial work” (Gouvernement Francais 1923). Not surprisingly, when first official employment statistics became available in the 1970s, female employment was significantly higher in former British territories compared to former French ones, while male employment did not differ between the two regions.

This setting provides us with a unique opportunity to examine whether and how colonial practices promoting female empowerment affect women’s lives in the long-term. In our study, we start by asking the following question: did the divergent opportunities that opened up for women when Cameroon was split into a French and a British colony have an impact on female participation in the labor market that persists until today? In Figure 2, using a regression discontinuity design within 40 kilometers of the historical Anglo-French border, we find that women in former British territories are today 24 percentage points more likely to be in paid employment than their counterparts in former French territories. This is a large effect, as it compares to a regional female paid employment rate of 62 percent. Women on the British side of the former colonial border are today also more economically empowered in terms of control over household resources and property ownership.

Next, motivated by a recent scholarly debate on the link between female economic empowerment and intimate partner violence (IPV) (Aizer 2010, Anderberg et al. 2016; Tur-Prats 2021), we ask a second question: does Cameroon’s colonial past—and its long-lasting effect on women’s economic empowerment—continue to influence women’s exposure to IPV today? Strikingly, women on the British side of the historical border face a 10 percentage points higher risk of (past year) spousal physical violence than their counterparts on the French side (Figure 3). Like the border effect on female paid employment, this effect is also large as it compares with a mean prevalence of IPV of 28 percent throughout the region examined.

We demonstrate that the two border effects on female employment and IPV are linked. Those women who, due to the legacy of British colonial rule, are today more likely to be employed are exactly those who experience an increased likelihood of being IPV victims. 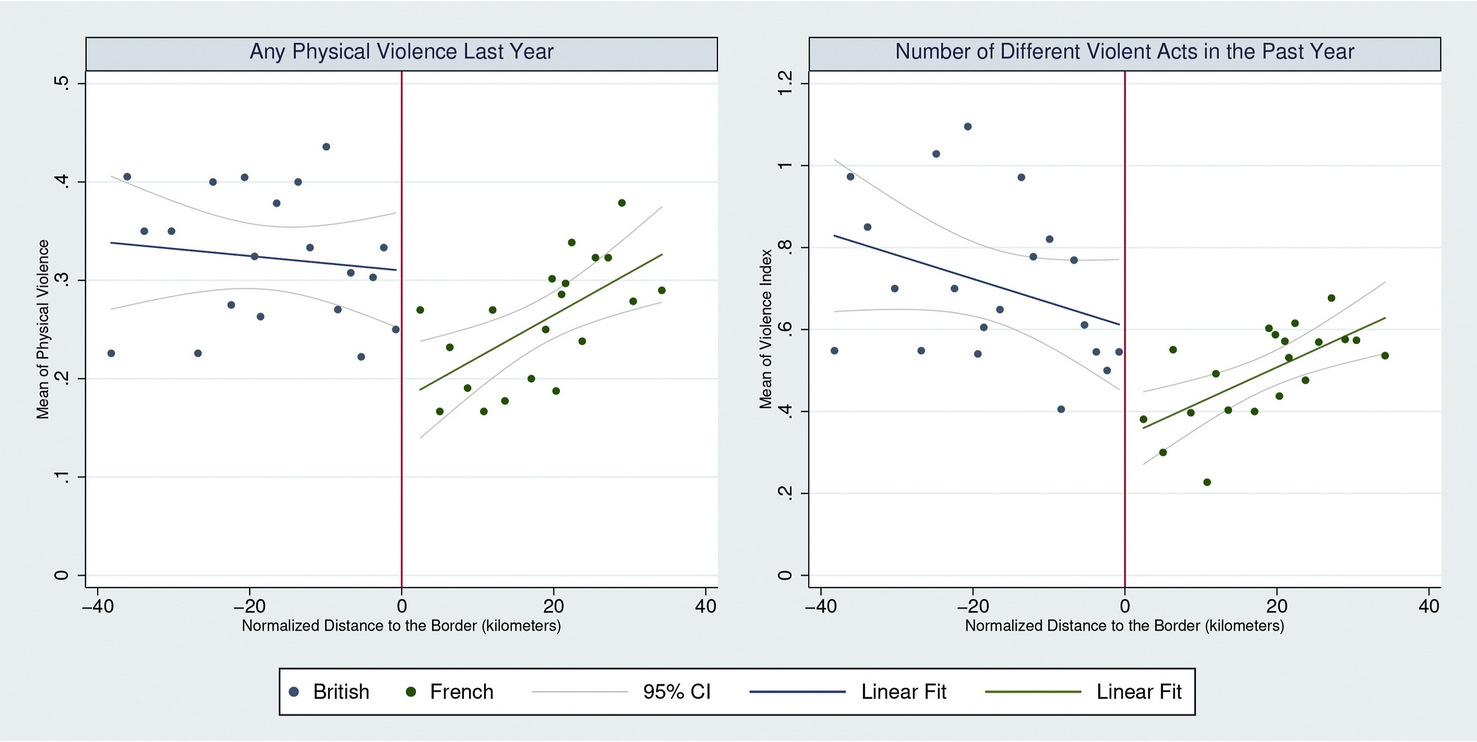 In several contexts worldwide, female economic empowerment has been linked to a reduction in IPV. Why does our analysis suggest otherwise? Our findings are consistent with theories of male backlash. When women’s economic opportunities increase, men might resort to violence to reinstate a culture of male authority. Consistent with this interpretation, we find that women on the British side of the historical border are 12 percentage points more likely to have a partner who objects to their employment.

British colonial rule left a two-sided legacy in the lives of Cameroonian women: it empowered them economically but, at the same time, it made them more vulnerable to violence within the home. Cameroon’s colonial past teaches us a lesson whose policy relevance carries over to our times: increasing female economic opportunities might not generate universally better outcomes for women. On the contrary, it might instigate backlash in the form of IPV. To prevent unintended consequences, policies favoring female economic empowerment should be accompanied by enforceable laws that offer women direct legal protection from domestic violence and the opportunity to divorce from abusive partners.

Cogneau, Denis, and Alexander Moradi. 2014. “Borders That Divide: Education and Religion in Ghana and Togo since Colonial Times.” The Journal of Economic History, 694–729.

Dupraz, Yannick. 2019. “French and British Colonial Legacies in Education: Evidence from the Partition of Cameroon.” The Journal of Economic History 79 (3): 628–68.

Government of the United Kingdom. 1958. “Annual Report of the Cameroon Development Corporation for the year 1958.”

Eleonora Guarnieri is a Junior Economist at the ifo Institute for Economic Research at the University of Munich and an Honorary Lecturer at the University of Exeter. Her research delves into the historical, cultural, and economic determinants of violence, with a specific focus on the African region.  Read more

Helmut Rainer is a Professor of Economics at the University of Munich and the Director of the Center for Labor and Demographic Economics at the ifo Institute. In his research, he studies intra-household decision making and conflict within families, as well as the impact of various policy reforms on child…  Read more