Portuguese Mozambique consisted of three distinct zones, which fit Samir Amin’s (1972) categorization into 'regions of colonial influence'. Different labour systems operated in the three geographic zones since early colonization, and these differences were maintained and exploited under colonial rule, also for the purpose of tax collection.

The capacity of the state to collect taxes determines the scope for public goods provision, which in turn has consequences for economic development and well-being. Many post-colonial states in Africa, including Mozambique, are often considered ‘failed’ or ‘fragile’, meaning that they don’t have the legitimacy to pursue this crucial task adequately. However, it has also been claimed that there is diversity across African countries in tax capacity, which has historical roots closely linked to colonial labour policies and practices (Mkandawire 2010, Feger and Asafu-Adjaye 2014). This article embraces the findings of this literature but claims that there are historically rooted sub-national level differences in tax capacity, as we will show for Mozambique (Figure 1).

It was essential to colonial administrations in Africa to introduce a system of tax collection in order to finance themselves without putting a burden on the metropole. Furthermore, taxation was supposed to have disciplinary power, forcing the indigenous population to produce for the market or pushing it into wage labour, and to spur the monetization of the economy. However, imposing a system of tax collection was very costly. It required surveillance of sparsely populated areas, and it could cause resistance which increased costs. Colonial states often adapted to local conditions for raising revenue. For instance, they could raise taxes in cash in an area that was integrated into the market and where the indigenous population could seek formal employment in the colonial economy. Wherever cash tax payments and wage labour were not effective, forced labour practices were used as a complementary tool not only to save expenditure but also to impose discipline. 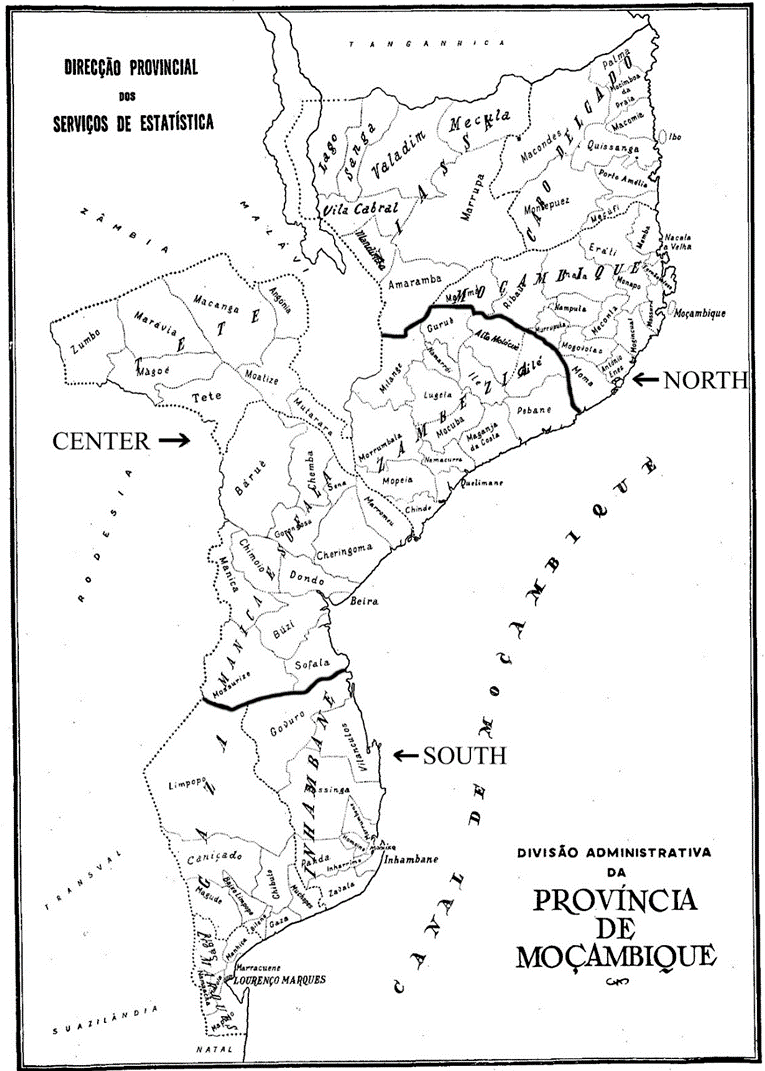 We built a novel dataset that includes yearly data on public revenue from 1930 to the end of the colonial period in 1973. We reconstructed direct taxes (mainly composed of indigenous taxes paid at fixed rates) per capita by district. Direct taxes were very important for the colony, as its trade flows, and thus the possibility of raising indirect taxes, were low. Figure 2 shows how direct taxation per capita differed between Mozambique’s three zones (north, centre and south) over time. In the 1930s, average taxes in the south were three times the amount levied in the north or central area (excluding the district of Manica e Sofala, which was under concession-company control until 1942). The south had significantly higher tax capacity than the north and centre, and this pattern persisted over time. Our main argument is that the differences in the capacity of the state to extract taxes derive mainly from the distinct local labour policies and practices. 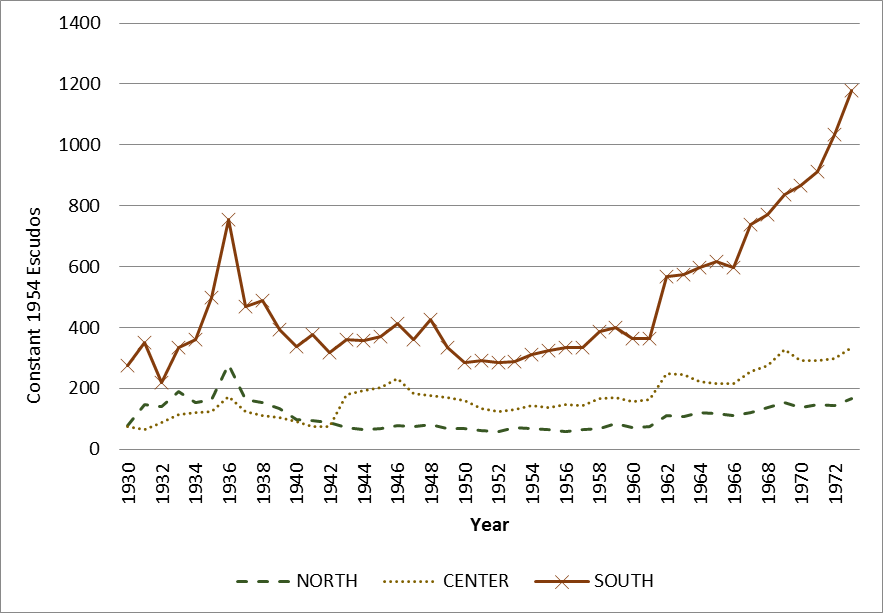 To explain the differences in tax capacity between the three zones it is important to consider the local factors that have been associated with the ability of the state to collect taxes in the received literature. We assess quantifiable characteristics of the population and the economy for each district (data are derived from the statistical reports of the colony of Mozambique), such as the dependency ratio (number of people aged zero to fifteen and above sixty-five, divided by the total population), population density, urbanization, the ratio of Europeans to total population, the share of the population employed in agriculture, and the presence of a major port. Variables affecting or capturing labour practices (Europeans as a proportion of the population, the share of the local population engaged in agriculture, urbanization and emigration) are correlated with tax capacity, while others are not necessarily.

We argue that the colony was divided into three economic zones and that this had consequences for taxation practices: the north, the centre and the south (see Figure 1). This threefold categorization has deep historical roots.

The south was the area from which a large share of young able-bodied men migrated to South Africa to work in the gold mines. When Portugal effectively controlled Mozambique from the late-19th century, it took over the regulation of these migration streams and introduced several mechanisms that allowed it to extract revenue from them. These included migration taxes, Portuguese tax collection in the mining sites, and deferred salary payments in Mozambique after completion of work contracts – which contributed to the monetization of the southern region (First et al. 1998). Furthermore, the south became the area where most Europeans settled and where Lourenço Marques (now Maputo), the capital of Mozambique, has been located since 1898. Urbanization and the presence of Europeans generated formal employment opportunities and further facilitated tax collection in this area.

In the central zone, prazeiros – descendants of Portuguese settlers and slave traders – had put in place a system of agricultural servant labour for their fields and collected taxes from the indigenous population (Newitt 1969). In the 1900s the control of this area was outsourced to concessionary companies that used it to plant cash crops for export and took over the collection of native taxes. In this less monetized and sparsely populated area, tax collection per capita was lower than in the south. In default of tax payments, the companies could force the population to work on plantations for below-market wages.

On the other hand, the densely-populated north was a largely peasant-based economy where the colonial presence came late and was never significant. Given that this area was also lowly monetized, taxation in cash was the least effective.

The different labour regimes in the north, centre and south resulted in an unintegrated fiscal state. The causes of the lack of integration in the process of colonial state formation in Mozambique are mainly related to local socio-economic conditions, including labour practices, as explained above. Colonial rule did not considerably alter the conditions underlying fiscal inequality between the three zones. Instead, the colonial policies and practices concerning administration, taxation, and most importantly labour, reinforced the regional differences. Over the early decades (1890s-1930s), the colonial state delegated administrative tasks to concession companies in central and northern Mozambique and used forced labour schemes until as late as 1960, while in southern Mozambique it institutionalized labour migration to the mines in South Africa and taxed migrant incomes. Either by extracting revenue or saving expenditure, Portuguese rule exploited the existing patterns and failed to improve labour conditions for the indigenous population.

Kleoniki Alexopoulou is a postdoctoral researcher in economic history at Universidade Nova de Lisboa. Her research focuses on the role of fiscal and labour regimes in state and social transformations in Portuguese Africa during the colonial era (1850s-1970s).  Read more