Witchcraft Beliefs and the Erosion of Social Capital

Belief in witchcraft, broadly defined as the ability to use supernatural techniques to harm others or acquire wealth, is a deep-rooted cultural phenomenon which still represents a salient feature of daily life in many parts of the African continent and beyond. While witchcraft beliefs have long been argued to impede economic progress and disrupt social relations (Platteau 2009), systematic quantitative evidence to support such claims has been missing.

According to numerous ethnographic case studies, witchcraft beliefs can have a direct adverse effect on interpersonal trust and cooperation via two main channels: by fostering the fear of bewitchment and by spreading the fear of witchcraft accusations. The latter may lead to severe sanctions, from destruction of property to ostracism and even ritual killing (Miguel 2005). Evidence on the corrosive effects of witchcraft beliefs comes from fieldwork conducted in Tanzania, South Africa, Cameroon, Namibia, Mozambique, Zambia, and other countries, where witchcraft-related fears manifest themselves in diminished cooperation, breakdown of mutual assistance networks, avoidance of joint projects, mistrust in community members, and general decline in social interactions. The overall narrative emerging from interviews and ethnographic observations suggests that witchcraft beliefs erode social capital, thereby hindering the fragile process of African economic development.

Motivated by the above case studies, in a forthcoming paper (Gershman 2016) I rigorously explore the relationship between witchcraft beliefs, trust, and other metrics of social capital. The key data on both witchcraft beliefs and trust come from a series of surveys conducted by the Pew Forum on Religion and Public Life between December 2008 and April 2009 in 19 countries of Sub-Saharan Africa. The main outcome variable captures the responses to the standard generalized trust question: “Generally speaking, would you say that most people can be trusted or that you can’t be too careful in dealing with people?” The survey module on traditional beliefs includes two questions that broadly fit the concept of witchcraft. Specifically, a person is assumed to believe in witchcraft if she claims to believe in either “witchcraft” or “that certain people can cast curses or spells that cause bad things to happen to someone” (labeled in the questionnaire as the “evil eye” belief). Figure 1 shows the distribution of trust and witchcraft beliefs across 188 African regions covered by the survey and reveals a rather obvious negative correlation between the two. 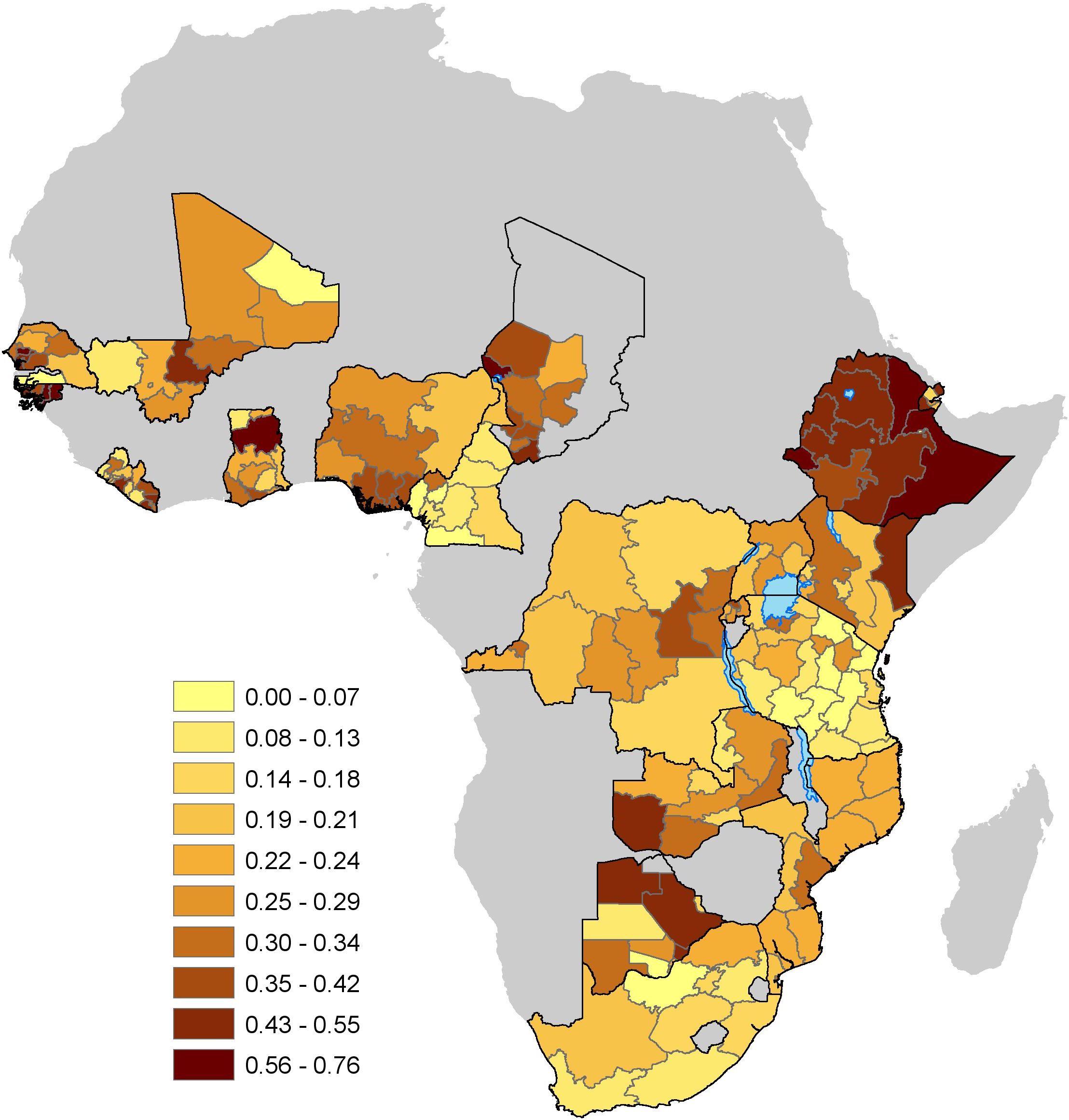 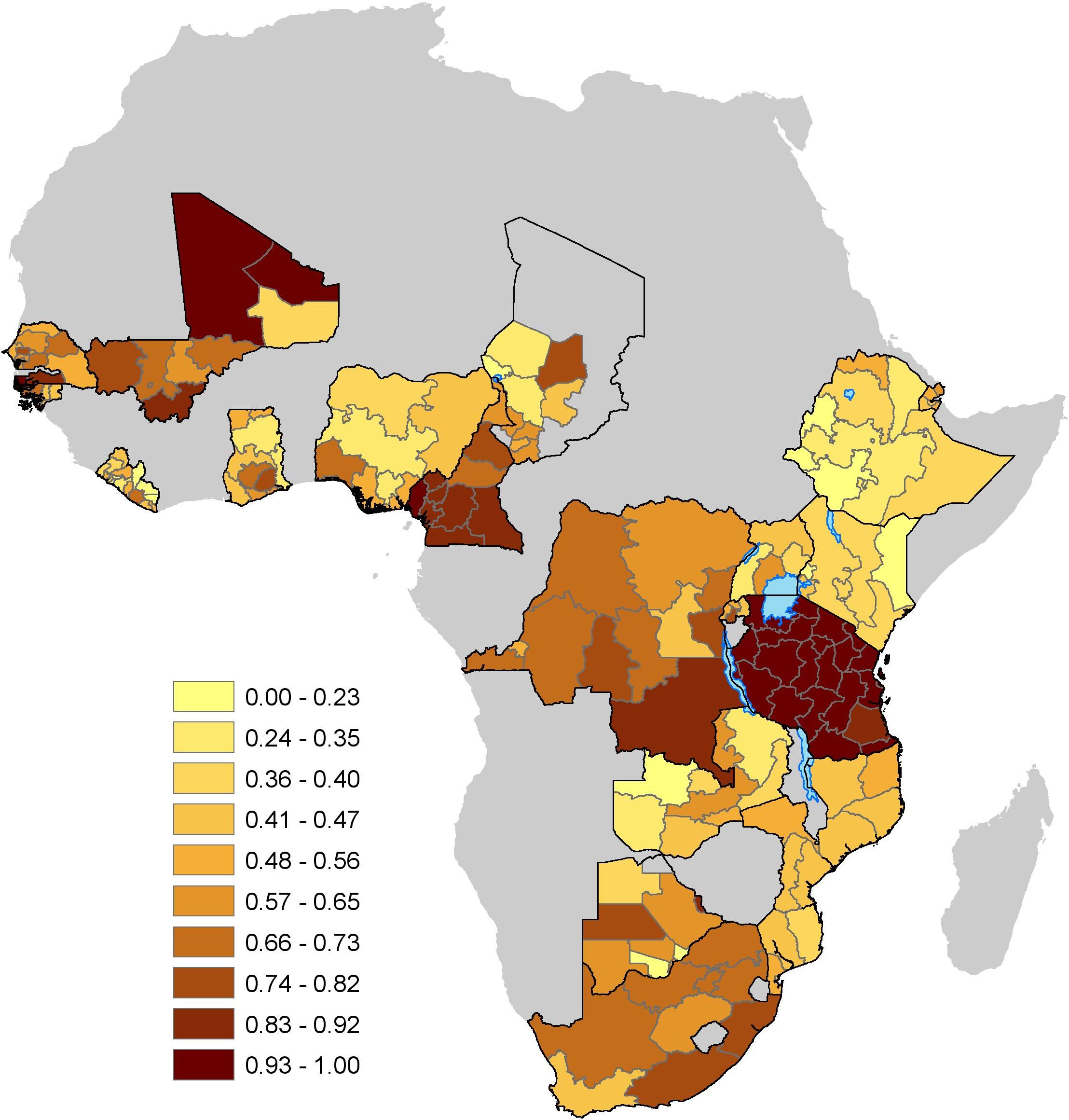 Since there may be factors confounding this relationship, a regression framework was set up to account for various relevant characteristics at the individual, regional, and ethnic-group levels. Furthermore, sub-national analysis allows to introduce country fixed effects that captures nation-specific factors, such as institutions, government policies and regulations, that may affect both trust and witchcraft beliefs. The negative association observed in Figure 1 turns out to be highly statistically significant and robust to the inclusion of a wide range of individual socio-demographic characteristics (such as age, education, religion, and material well-being), measures of regional geography, economic development, conflict, ethnolinguistic diversity, quality of local institutions, as well as historical ethnic-level indicators. The estimates suggest that, other things equal, a one-standard-deviation increase in the regional prevalence of witchcraft beliefs corresponds to an average decline in trust by roughly 0.1 standard deviations.

Other beliefs and other kinds of trust

One may wonder whether any kind of superstition is inherently related to mistrust. Falsification tests using the data on other beliefs available in the survey show that witchcraft and conceptually related superstitions (such as belief in the protective powers of juju) seem to be quite unique: there is no significant relationship between trust and beliefs in heaven, hell, reincarnation, angels, miracles, or evil spirits.

In order to conduct a more nuanced analysis of trust, the data on witchcraft beliefs are connected to three waves of the Afrobarometer surveys (2005-2013) containing a variety of trust questions. In that sample, witchcraft beliefs are negatively related to trust in relatives, neighbors, and other acquaintances. Similar relationship also holds for trust in local institutions, such as police, courts, and local council. This finding speaks to the broader nature of the negative association between witchcraft beliefs and community trust and is consistent with the idea that such beliefs may damage cooperation even within tight social networks (Geschiere 2013).

Although the empirical investigation mostly focuses on trust, it also detects a strong link between witchcraft beliefs and other elements of social capital. Specifically, people who claim to believe in witchcraft and those who reside in regions with higher prevalence of witchcraft beliefs are significantly less likely to engage in charitable giving and participate in religious group activities. Interestingly, this finding complements the well-known research on the positive role of religions with moralizing high gods in promoting cooperation and prosocial norms (Norenzayan & Shariff 2008): in sharp contrast, witchcraft beliefs are associated with antisocial attitudes. One may surmise that such outcomes represent competing “bundles” of mutually reinforcing beliefs and norms emerging in the process of cultural co-evolution (Chudek & Henrich 2011).

While a large part of earlier research on witchcraft beliefs focused on Africa, the established relationship need not be confined to this continent. Using additional survey data from 23 nations beyond Sub-Saharan Africa (including those in Asia, Europe, North Africa, and the Middle East), a broader country-level dataset on witchcraft beliefs was compiled. As shown in Figures 2 and 3, there is a clear negative association between witchcraft beliefs and generalized trust in a cross-section of countries, similar to that observed for African regions.

This extended dataset is then connected to the pooled data from five rounds of the European Social Survey (2004-2012) and used to examine the trust attitudes of second-generation immigrants in Europe. It turns out that Europeans whose parents were born in countries with more widespread witchcraft beliefs are generally less trusting. Thus, witchcraft beliefs may contribute to the formation of persistent antisocial culture. 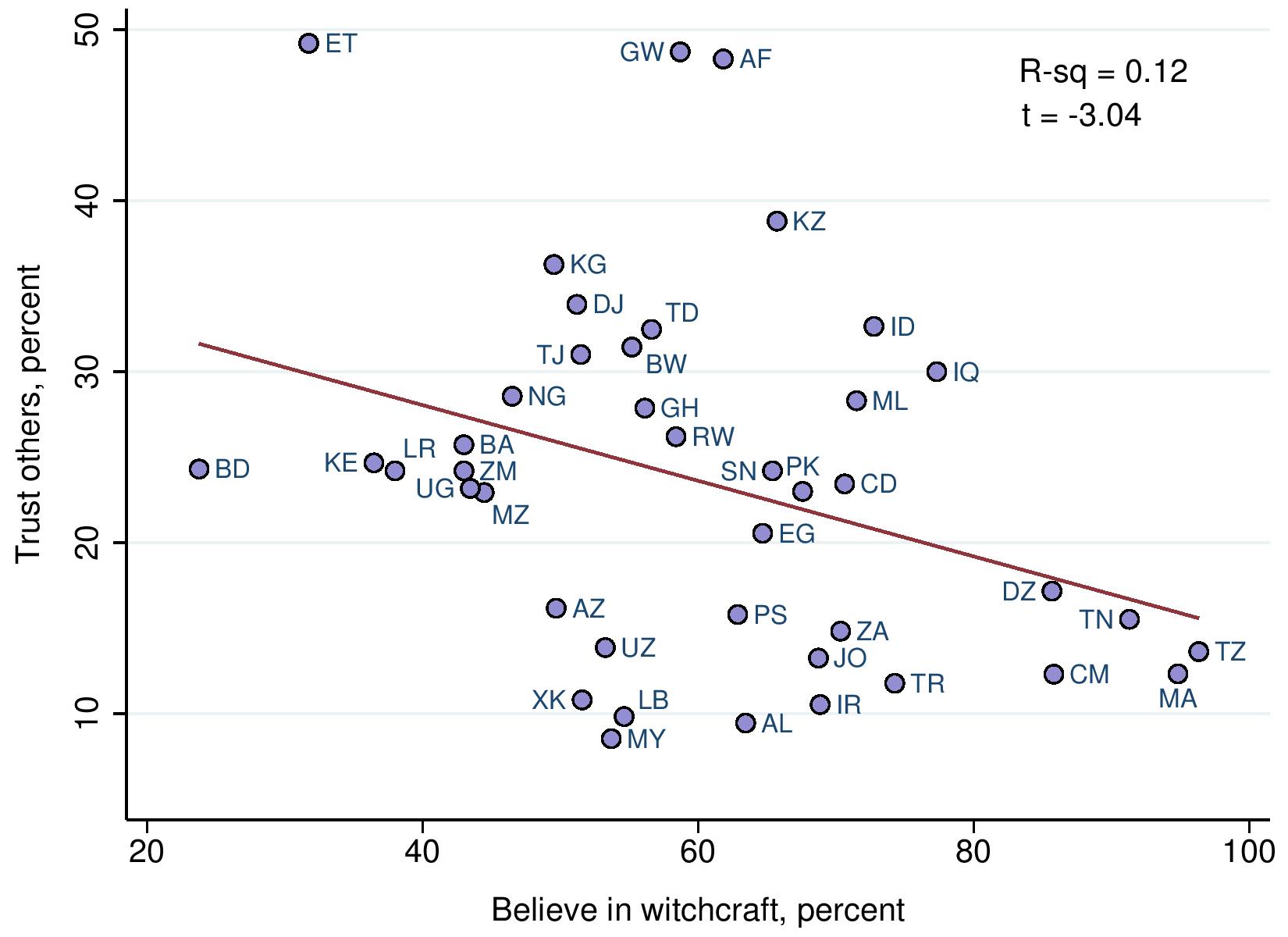 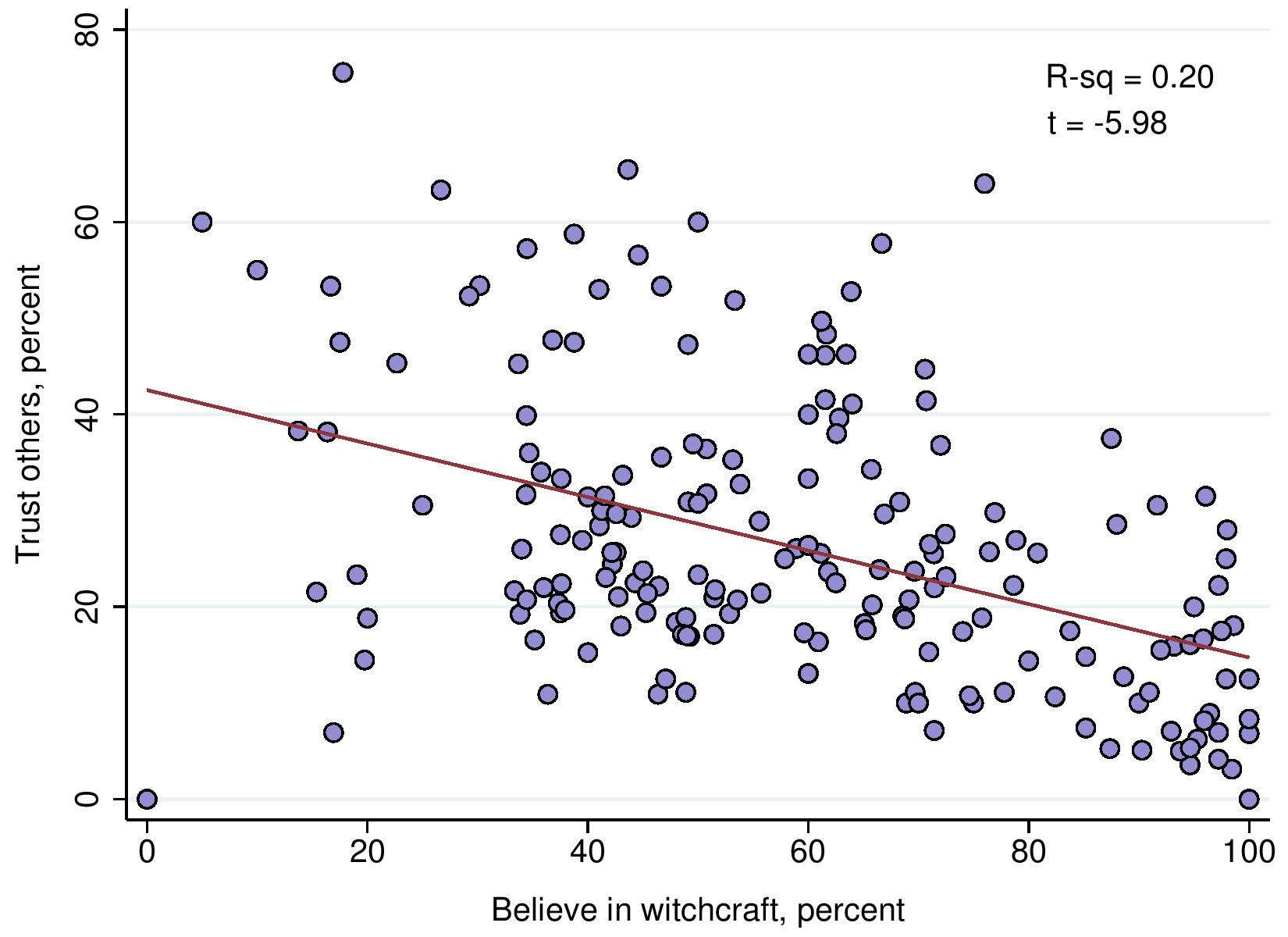 This study suggests that there is a strong possibly self-reinforcing negative relationship between witchcraft beliefs and social capital which may impede socioeconomic development in Sub-Saharan Africa and beyond. From a policy perspective, it is thus important to account for local culture when undertaking development projects, especially those that rely on communal effort and cooperation.

Gershman, Boris (2016), “Witchcraft Beliefs and the Erosion of Social Capital: Evidence from Sub-Saharan Africa and Beyond”, Journal of Development Economics, 120, pp. 182-208.

Boris Gershman is an Assistant Professor of Economics at American University in Washington, DC. He earned his PhD in Economics from Brown University in 2012 and held a visiting scholar appointment at the University of Warwick in 2015. His primary research focuses on the deep determinants of economic growth and development…  Read more