Few doubt that colonialism generated new economic cleavages in African societies. Yet we know little about the extent of such economic inequality in different African colonies and across time. In this article, I measure income inequality in Uganda in five benchmark years between 1925 (mid-colonial period) and 1965 (just after independence). I find that overall income inequality was low compared to other African colonies, but sharp fault lines existed, especially along racial lines.

Based on what we know about Uganda’s pre-colonial and colonial history (Reid 2017), how much inequality should we expect? Uganda’s economy was predicated on smallholder production of export crops – cotton and coffee most importantly (De Haas 2017). In a land-abundant context, this economic structure fostered broad-based access to self-provisioning and cash income, which may have supressed income inequality. On the other hand, we have reasons to hypothesize that colonial Uganda was unequal. First, pre-colonial Uganda was far from egalitarian. There were sharp inequalities within the centralized Great Lakes Kingdoms, some of which came to make up a large portion of colonial Uganda, as well as between these Kingdoms and other parts of the territory. Second, the agricultural trading and processing sector in colonial Uganda was in the hands of South Asians. Meanwhile, the higher rungs of the colonial government were filled by Europeans. To what extent were these inequality-suppressing and -inducing factors visible in the country’s income distribution?

Attuning social tables to the context of colonial Africa

To reconstruct Uganda’s colonial inequality landscape, I use the ‘social table approach’, which simplifies the full income distribution of a given population into a smaller number of ‘social classes’. I distinguish eleven such classes for 15 districts each: three mutually exclusive income classes of African wage workers, five mutually exclusive income classes of self-employed earners, two classes of Europeans, and one class of Asians. Social tables have been employed by others in research on colonial Africa as well: Botswana (Bolt and Hillbom 2016), Ghana (Aboagye and Bolt, 2021), Kenya (Bigsten 1987) and Ivory Coast and Senegal (Alfani and Tadei 2019). This literature is synthesized in a recent paper by Hillbom, Bolt, De Haas and Tadei (2021).

My aim is not just to provide in-depth analysis of the Ugandan case, but also to make progress in finetuning the use of social tables in an African colonial context. In the latter respect, I show that it matters a lot what population we use to rank incomes – households or individuals – and how we think of income distribution within households. I demonstrate that households with higher incomes also tended to have more members. This means that such households come out as relatively ‘high income’ when we compare them on an aggregate level, but not when we break down the distribution to their constituent individual members, as long as we assume equality within the household (which is common in inequality studies today). However, when we allow for intra-household inequality, a household head still benefits from adding more members to the household, as long as he (typically a polygamous man) is able to extract at least some income from additional household members. Thus, in an African, context, where people accumulate ‘wealth in people’ (Guyer and Belinga 1987) and households differ considerably in size, it is important to consider these dynamics explicitly when thinking about and measuring inequality. The results below are robust to using these different assumptions about the ranking population.

How unequal was colonial Uganda?

I consider this question along four dimensions: in comparison to other African colonies, and in terms of space (regional inequality), race (Africans versus expatriates) and class (income differentiation among African wage earners and the self-employed). I find that in comparative perspective, Uganda was fairly equal and did not see overall inequality rise during the period studied (Figure 1). I attribute this to Uganda’s land abundance and favourable agricultural conditions, which enabled the vast majority of households to provision their own food. Moreover, Uganda’s main crop – cotton – was labour intensive and did not favour the rate of unequal accumulation that, for example, livestock did in colonial Botswana (Bolt and Hillbom 2016). 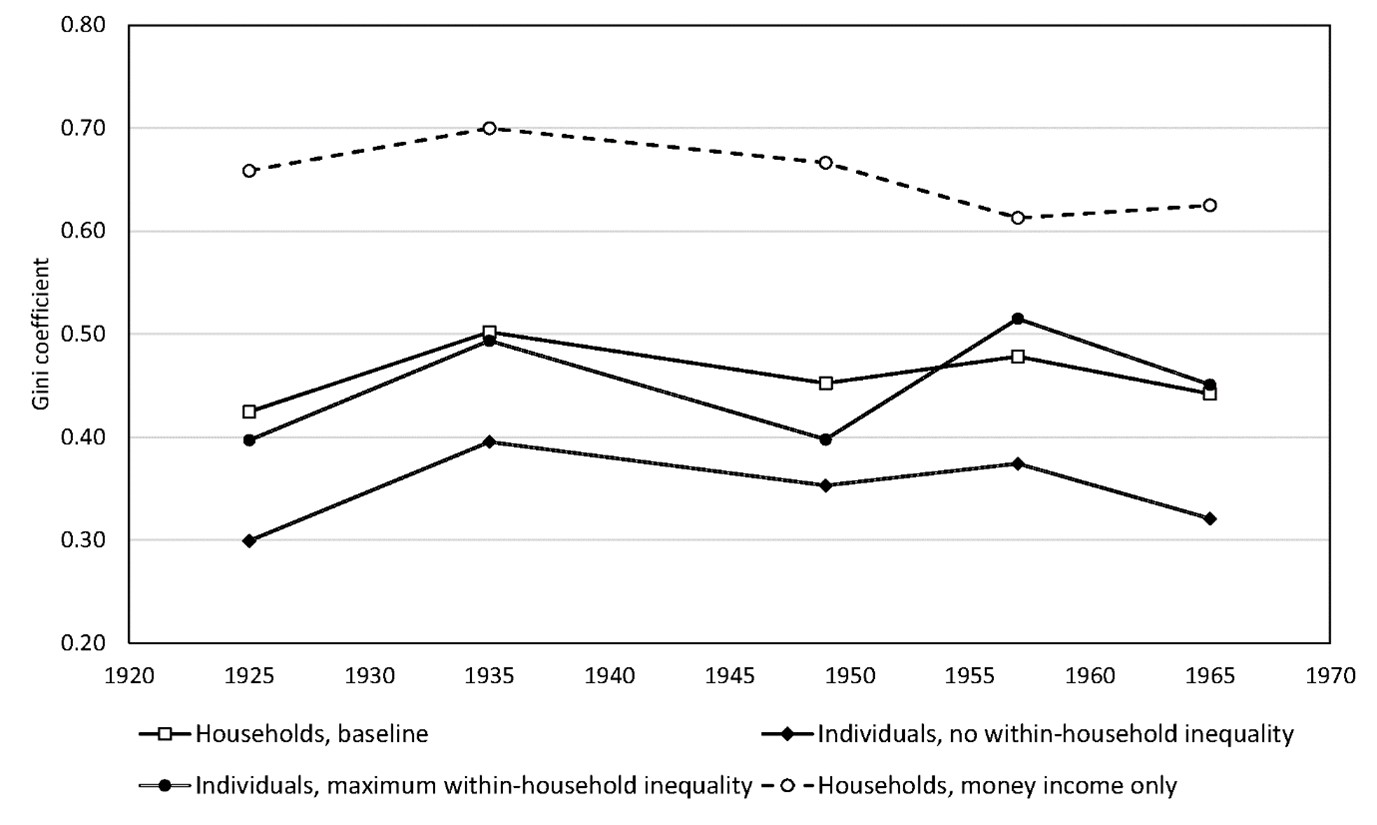 Using the Theil coefficient, we can analyse how different cleavages contributed to overall inequality (Figure 2). Here, I find that race dominated as the most important fault line in Uganda, especially before the 1950s. The 1930s were most extreme in this respect, as European households earned, on average, some 60 times as much as the average African household, and Asians close to 30 times as much. Regional differences, in contrast, were present but contributed only moderately to overall inequality – especially when self-provisioning is taken into account. Inequality among African classes rose in the late-colonial period, as some farmers specialized in coffee and livestock, while the number and average incomes of salaried professionals rose as well.

Figure 2: Decomposition of inequality in Uganda along lines of race, class and region. 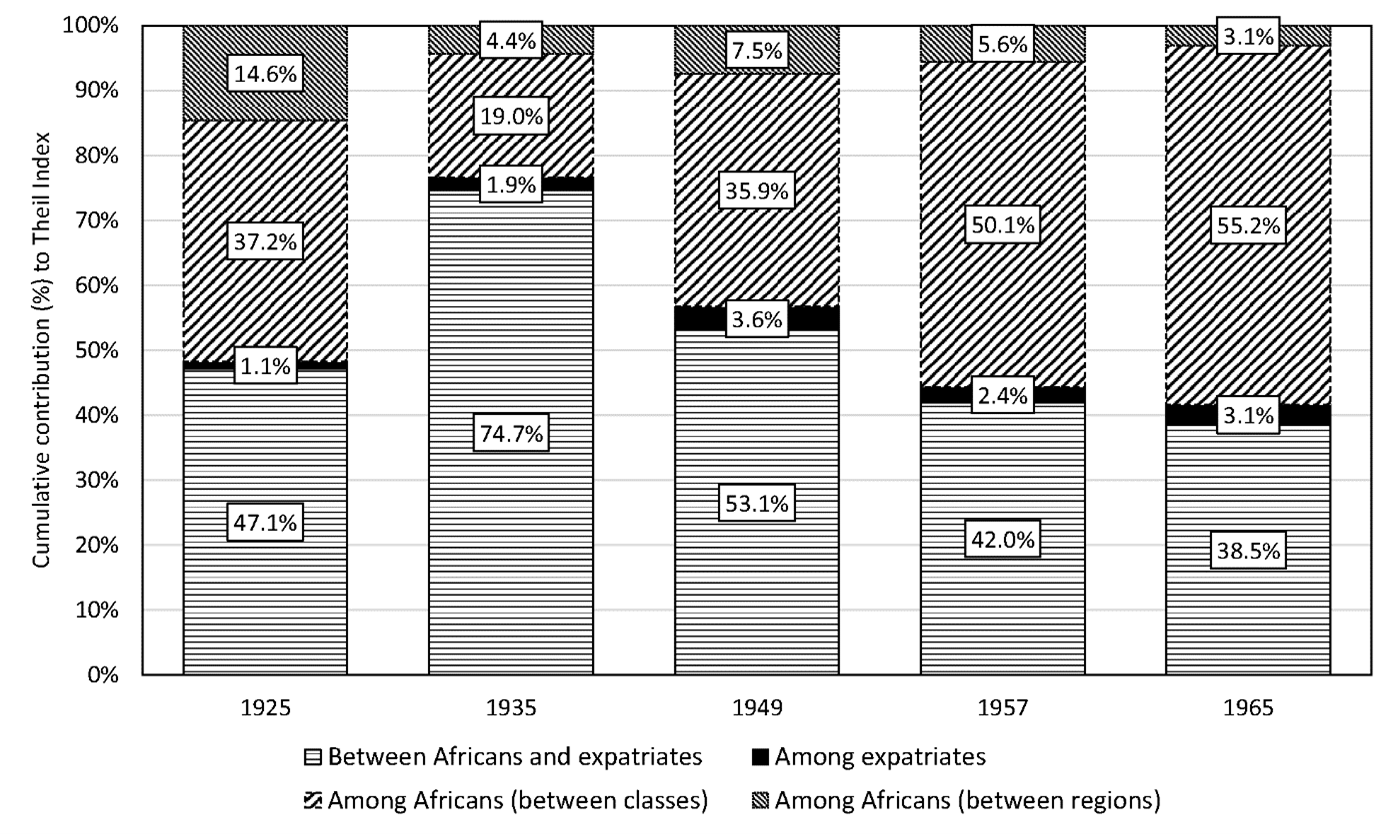