This research studies the impacts of sudden exposure to climate induced disease on gender gaps in human capital investment, by examining the effects of a 1986 meningitis epidemic in Niger. The epidemic reduced years of education for girls relative to boys. A primary mechanism explaining the results is early marriage of girls in exchange for a bride price to manage increased household costs from the epidemic.

What is the impact of climate-induced health shocks on gender inequality? In almost every country in the world, negative shocks to society disproportionately harm women. Women are often more vulnerable, lacking the same legal, social and economic protection as their male counterparts. Given the vast literature on the positive economic impacts of investment in education and the fact that, in many countries, notable gender gaps in educational attainment still remain, the potential economic gains and improvement in welfare from educating girls are significant (Schultz 2002).

Rising health costs, resulting from worsened disease environments due to global warming, might impose significant costs on households, which might lessen relative investment in girls’ education, particularly if parents have lower expected returns from investment in girls’ human capital. In this paper, we use data from the meningitis belt, which runs across sub-Saharan Africa (SSA), as shown in Figure 1, to examine the impacts of the 1986 meningitis epidemic in Niger on the gender gap in educational attainment (Archibong and Annan 2018, 2017).

Over 95% of the Nigerien population resides in the belt where most of the epidemics of meningococcal meningitis occur. The epidemic form of meningitis is ‘an infection of the thin lining surrounding the brain and spinal cord’, and is associated with fevers, pain, reduced cognitive function and in the worst cases, permanent disability and death (La Force et al. 2009). The epidemiology of the disease is complex, and though incidence is associated with higher wind speeds, dust concentrations and lower temperatures that come with the onset of the dry, Harmattan season in SSA, the mechanisms of transmission are not fully understood. Niger had one of its most severe epidemics in 1986, with 15,823 reported cases per 100,000 population and a mortality rate of about 4%.

We combine district level data on meningitis cases per 100,000 population from the World Health Organization (WHO) and Ministry of Public Health in Niger with individual and district level data on education and demographics from the Nigerien Demographic and Health surveys (DHS) from 1992 and 1998 to examine the impacts of the 1986 epidemic on years of education completed for respondents who would have been school going age at the time of the epidemic. We find that higher meningitis exposure during the epidemic reduced years of education for school-going aged girls as of the time of the epidemic by up to 3-4% relative to the mean (equivalent to a reduction of .03 to .04 years relative to a low base of 1-2 years of schooling). There are no effects of meningitis on the gender gap in non-epidemic years.

Niger has the highest rates of early marriage in the world, with 75% of girls married before the age of 18 (Loaiza Sr and Wong 2012). Niger is also part of a number of countries in the world, particularly in SSA, with a history of bride price marriage practices. We find, following the literature, a strong positive association between age at first marriage and years of education, particularly for women in our sample. We find that female respondents who were school-going aged during the 1986 epidemic year were almost twice as likely to marry earlier in high (above the national mean of about 10 weekly cases per 100,000 population) meningitis exposed districts than in low (below the national mean) meningitis exposed district as shown in Figure 2, a trend not seen during the 1990 non-epidemic year. There is a significant negative association between meningitis cases during the epidemic year and age at first marriage for the female school-going aged sample, with no significant effect for the comparable male sample. The epidemic significantly reduced the age at first marriage for school-going aged girls as of the time of the epidemic. The results lend support to the bride price channel, where the epidemic acted as negative income shock, leading households to smoothen their consumption by “selling” their daughters for a bride price. This is reflected in the lowered age at first marriage during epidemic years but not non-epidemic years and with the effects significant for girls but not boys. 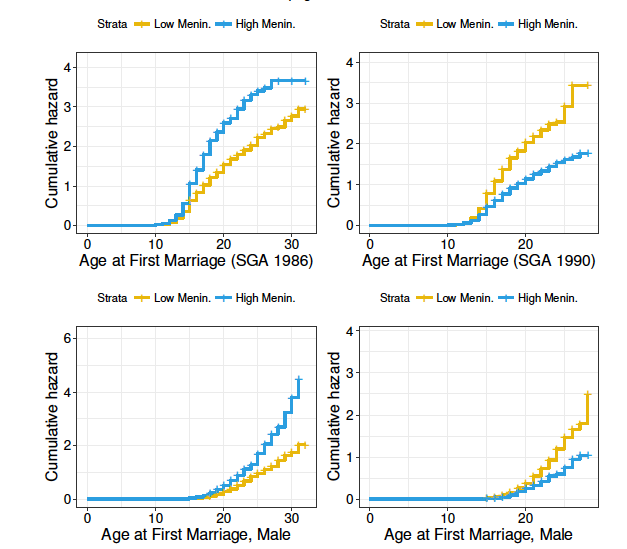 Global warming is expected to worsen disease environments in the future, and these health shocks are costly to households with detrimental effects on girls

The results highlight the need for more research and policy focused on the role of household coping strategies in worsening future gender inequities in the aftermath of climate-induced health shocks.

Belinda Archibong is an Assistant Professor of Economics at Barnard College, Columbia University. Her research investigates the role of historical institutions and environment in inequality of access to public services and the development of human capital in African nations.  Read more

Francis Annan recently completed his PhD with a dissertation on the economics of contracts and risks from Columbia University. He will be joining Georgia State University (Robinson College of Business) as an Assistant Professor Insurance Economics starting August 2018.  Read more